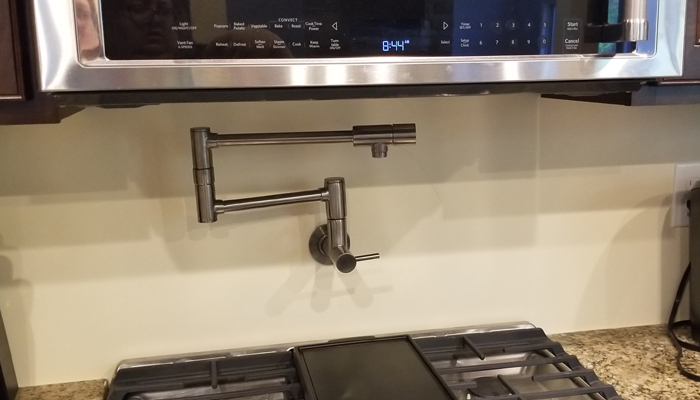 Where to start?  Well it’s been a lot of unpacking, unpacking and more unpacking.  Then arranging, rearranging and more rearranging.  I have a feeling I will be doing lots of rearranging for months to come.  My goal for last week was to get the kitchen and homeschool room up and running, but that was in a perfect world and rarely do things go perfectly.  I did get the kitchen going, but we still had workers in and out that distracted me from getting very far on the homeschool room.  That room has been my primary focus this week though so we will start homeschool back up next Monday at the latest.

When I last left off, we were expecting the glass shower door install the next day.  While they didn’t show up when they originally said they would, they did get there that day and got it all installed and it looks great.  We are really enjoying the 4′ x 4′ walk in shower.  It’s so roomy and added on a hand held shower wand for doing my hair and it works great.

Our Field Manager came that day as well and finished the wall patch for my pot filler by sanding it and painting it.  You would never know that the wall was cut out there and fixed by looking at it.  Now for the plumber to come back and hook it all back up and it will be complete.

The next day Richard went to a local landscape supply store that also sells to homeowners and picked up seed and fertilizer for up to 5,000 square feet.  Originally we heard a lot of ‘you should wait a year to plant any grass seed or you will have to roll your lawn from the settling’..and while that may be true around the house, we decided that wouldn’t be the case as much on the septic field in the back yard as they don’t dig down very far to install the leach lines.  Knowing that the septic would benefit from having grass on it as soon as possible, we decided to go ahead and tackle this job ourselves.

We also picked up a nice seed spreader with rubber tires on the advice of one of the workers at the seed supply store.  A landscaper wanted to charge us $3,500 or so for this service and while they would have used a little nicer stuff, if it all works out we will have spent less than $300 and that includes the spreader.  They wanted to put down extra soil and stuff down by default, but since the top soil is still there (they didn’t dig down enough to have put clay back on top like the yard in the front and around the house) we don’t think it will be necessary for this area.  This was the number one thing on our agenda last weekend.

On Friday, the electricians came back to fix a couple things.  Nothing major, but it crossed a couple of things off our final list.  At this point the plumber was set to come back on Monday but our FM cave Richard a call and asked if the plumber could come Friday instead which was fine with me.  He came back and reinstalled the pot filler and another item and made sure everything worked before he left.  It looks like it was always at this height, again you can’t tell a thing was changed and as you can see, there is plenty of clearance under the microwave now. 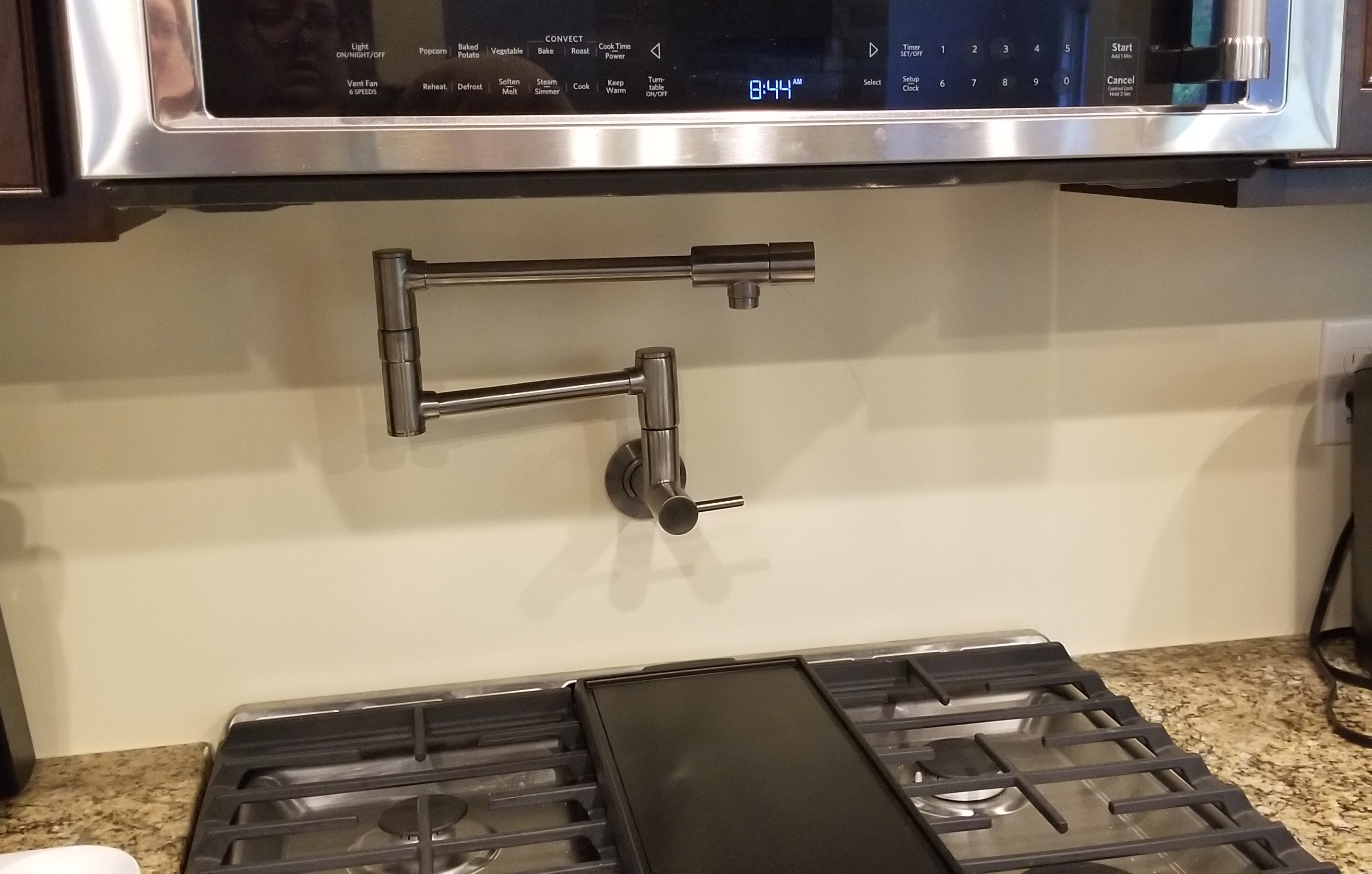 So that is it.  We are officially handed off to the warranty side of things.  Wayne Homes has a bumper to bumper type warranty for 2 years where they handle anything that comes up.  After those 2 years it’s up to the individual manufacturers warranties.

One thing we have been dealing with is many…many…many flies.  We had to have the doors open for many hours during the move and the flies, which had already come in while the windows were open for cleaning the week before, seemed to multiplied by massive amounts.  We bought a fly swatter but they were hard to get.  I tried homemade traps and that only got one or two.  I tried a few other things but still killed less than a dozen, so I went looking for a better solution and found these fly boards that work like the strips but don’t have to be hung.

Simply put, these things are awesome!  I put a couple down and got a dozen flies withing the first couple hours.  We still have flies we are trying to get rid of but they are few and far between now instead of feeling like they are everywhere.

I took this picture because I’m not sure how this particular thing happened.  It was flying upside down and crashed into my post and it’s squished head stuck to the post?  I don’t know, but I found it amusing. One more dead fly.

So last weekend we had the seed spreading to do, which was pretty straight forward and it went well I think.  The weather has been like a yo-yo so we are nervous about how well it will do, but we figure if even part of it germinates it will have been worth it.  The general rule of thumb in central Ohio is to get it planted before October 15th, so hopefully it will grow.  We don’t have water hoses that will reach all that way but the day we put it in that area was muddy and the landscapers we talked to said not to worry about it because the dew alone this time of year with the good seed should be enough.  We will see.

We also had a big shopping trip to Costco.  When we prepared to leave the apartment, I made sure to use up as much of our pantry items as possible so we didn’t have to move them, but that meant we had very bare cupboards.  After that trip, I now need to find a way to organize/categorize areas of my pantry so I can find things quickly, but after having a pantry that was barely 2 feet wide for 17 years, let me just say this is a nice problem to have!

One of the other projects we had last weekend was to finally get our mirrors up.  We ended up having to hang them with picture wire which was not my preferred method, but in order to get the hangers into studs, that’s what we had to do.  We actually had gotten the one in the powder room up earlier in the week and it looked great, but I knew the ones in our master bath especially would be a challenge to install because I wanted them to be level with each other.

It took some time and there was some frustration, but we finally got them all installed.

Some other things we did last weekend was to do a little furniture shopping.  We have a gift card for $500 from our appliance purchase to spend on furniture.  We thought we would look at bar stools for the kitchen, a desk for Richard’s office or a console table for the foyer.  However, when we started looking at this store nothing really fit the bill.  I did find some bar stools that might work, but that wouldn’t use up the full gift card so I was looking for a better use of the money.  In the end we spent a couple of hours in the store and were no closer to picking something out, so we went home and I did more looking online.  I have the console table narrowed down to 2 that I found online, it just depends on what look I want to go with and if I want some drawers for storage.  The bar stools are a different thing though because I feel you have to sit on them to see if they are comfortable before purchase so they definitely aren’t an online purchase for me.  At this point I am holding onto the gift card until I decide on a better use of the money.

I spent some time on Sunday working on the homeschool room.  It’s coming along and it’s a lot to organize but I am really looking forward to being able to have a dedicated room separate from our dining space to do school.  I have lots of fun educational posters I want to put on the wall but I am showing some restraint and holding off until we can buy new organizational furniture for that room because my free wall space is likely to change.  Oh and this week we added a digital piano to the mix!  I’ve been looking for one for Creative Kid but every used one I found was only $50-$100 less than new and I wasn’t willing to pay that, but I got a great deal on a new one still in box from a pallet reseller.  I bought a stand, bench and earphones from Amazon that will arrive before the end of the week and I have a perfect corner for it all in the homeschool room.  It was supposed to be a Christmas gift for CK, but it became his main birthday gift when we couldn’t hide it from him.  His previous main birthday gift will now be a Christmas present. ?

The first three days of this week have been uneventful.  I’m just plugging away on boxes.  Richard says he sees the progress when he comes home from work, but half of the time I don’t.  I guess it’s because I’m surrounded by the boxes every day and there’s so many of them that it’s hard for me to appreciate the work I have done thus far.  Then there’s the fact that I will think I’m done with an area, then find something in a box that makes me have to rearrange everything I have put away there.  Like I said, I think I will be rearranging for quite a while.  Then I will figure out what new organizational things we need and have to rearrange it all again.  But it will get there…it will get there.

Things coming up include having our water softener installed, another consultation with a landscaper and we’re looking at getting some quotes for built ins on either side of the fireplace.  I did get a little fall decor up yesterday though and that made me happy to see something that is a little more homey in the midst of all the boxes and mess.