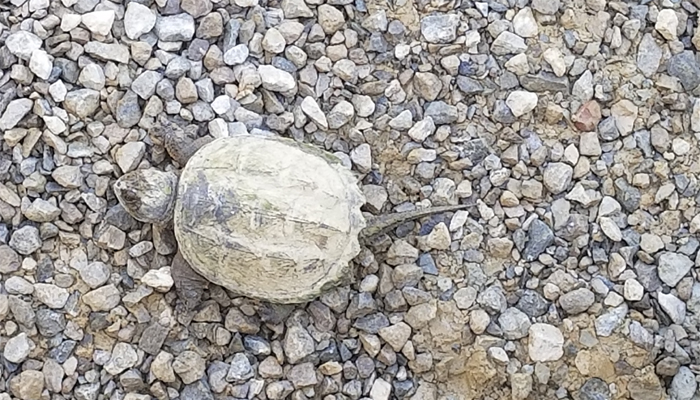 We went out to the build on Sunday (Day 28) to take a look and see if the tree cutting was completed and do some work on the land.  One of the first things we did was go check out the basement and look what we found! 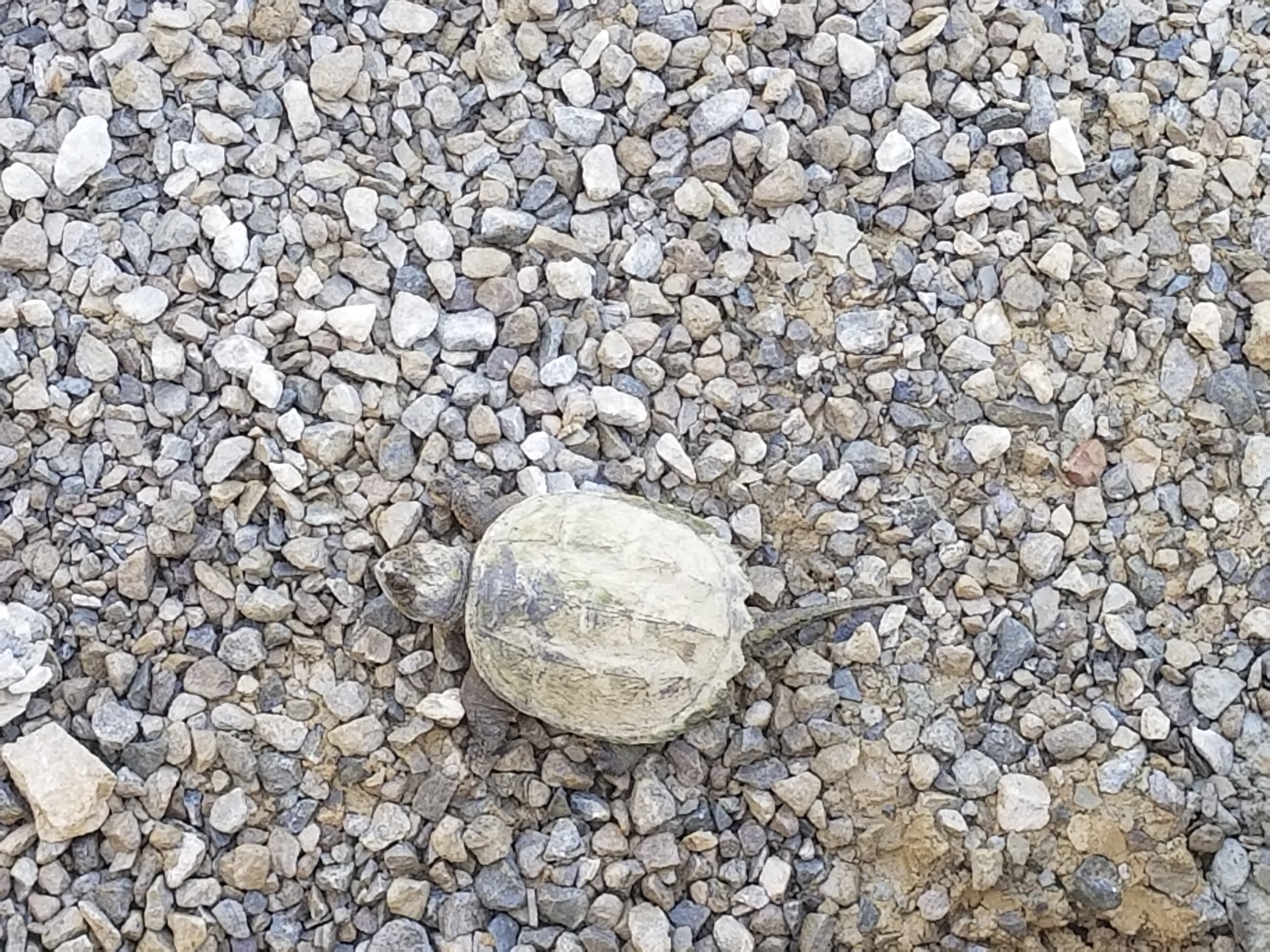 We can only assume he was able to walk pretty much up to the ledge now that the grading has been done and fell in.  We had a ladder with us, but it is not tall enough to get in and out of the basement with so we had no way to remove him.  When we originally saw him he was in the middle of the basement and later he did move around so we knew he was definitely alive.  I don’t remember enough about turtles and didn’t know what kind of turtle he was, but his shell was probably around 5-6 inches across. More on Mr. Turtle later.

So we went back and looked at the tree progress and it looks like they did indeed finish what was needed to be done for the septic.  We will have the septic guy verify there is no more than needs to come down and we need to have a work day out on the land just for us to move the logs.  It’s going to be hard work and it was so hot so early, that we didn’t want to add that to the list to do that day. 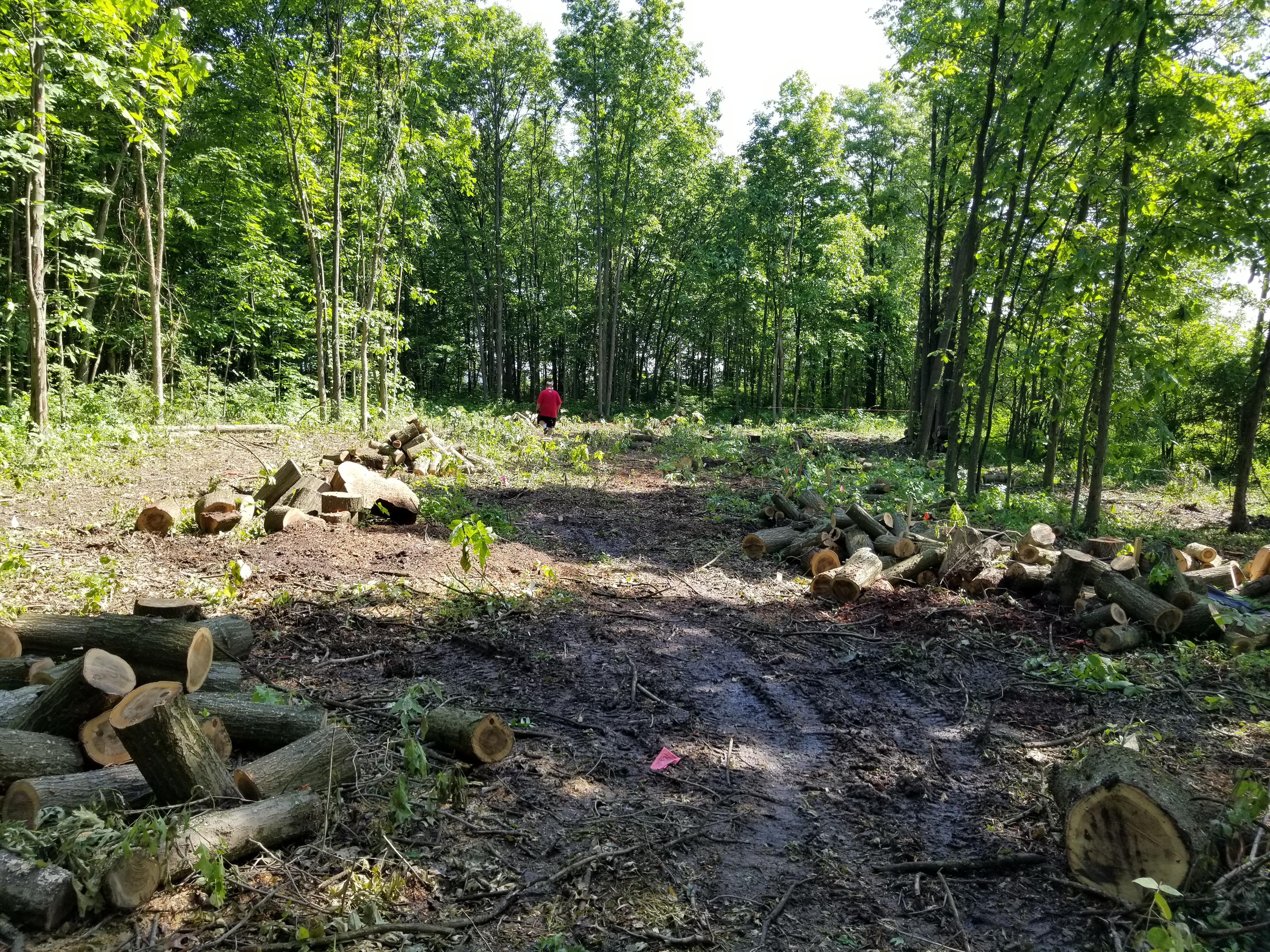 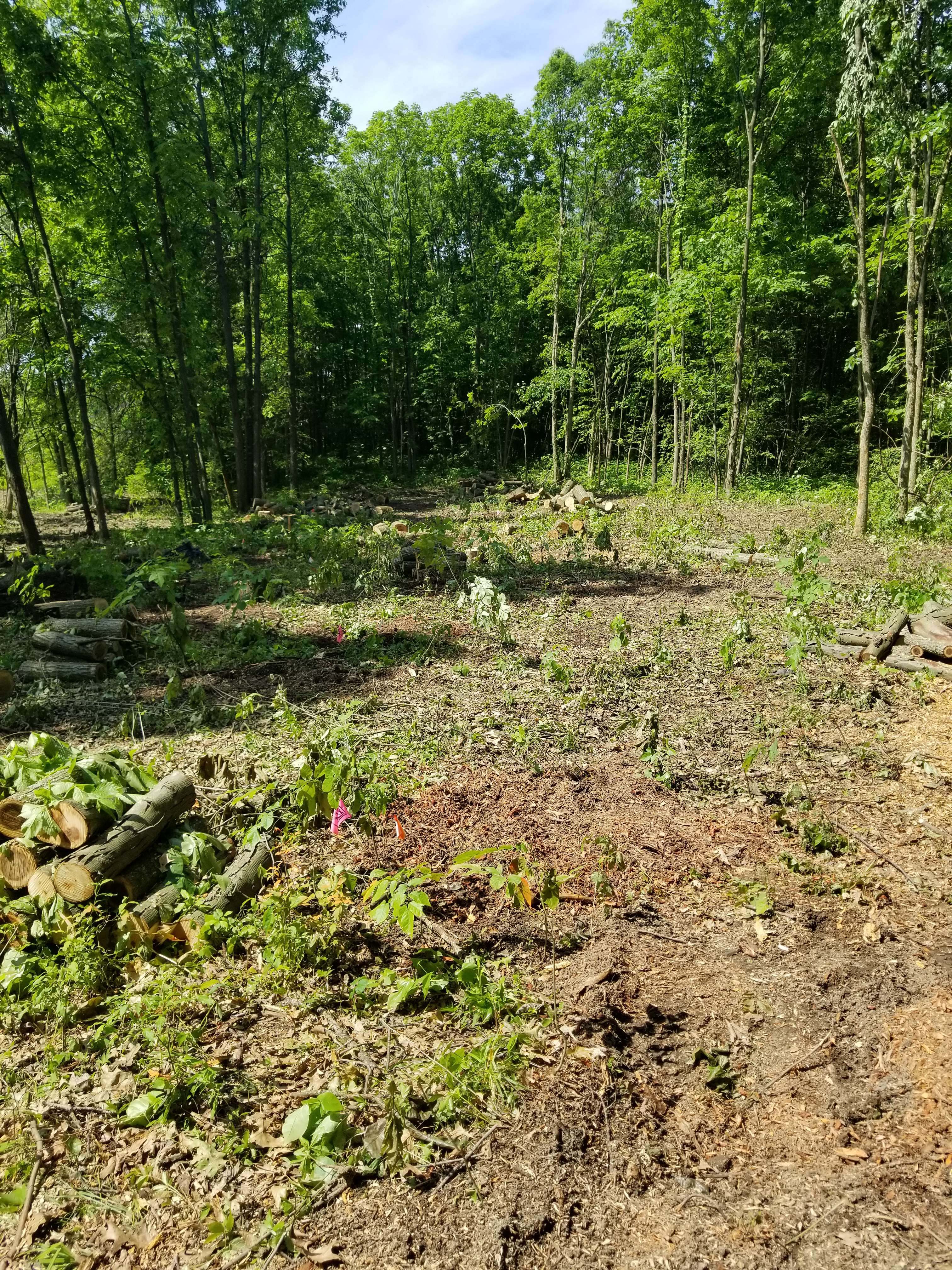 As you can see, the clearing is pretty visible once you get back into that area. 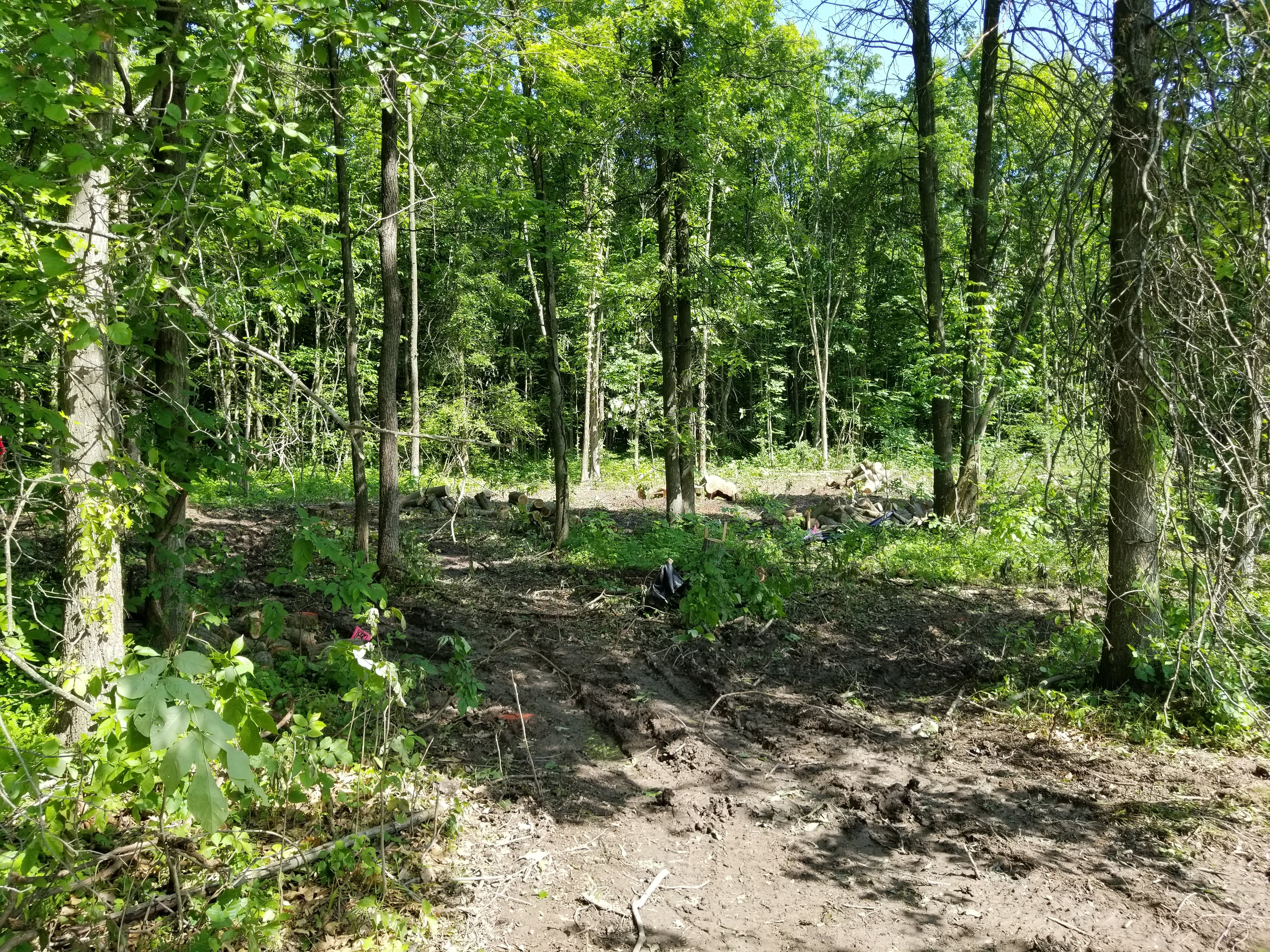 When on the front of the property it isn’t seen as much because we have left trees in front of the septic, that at first we were thinking about clearing, but changed our minds for now because we were trying to cut costs.  In the future at some point we may have to have some of those removed for the pool area, but for now we are glad they are there and will disguise the area until grass is grown on it. 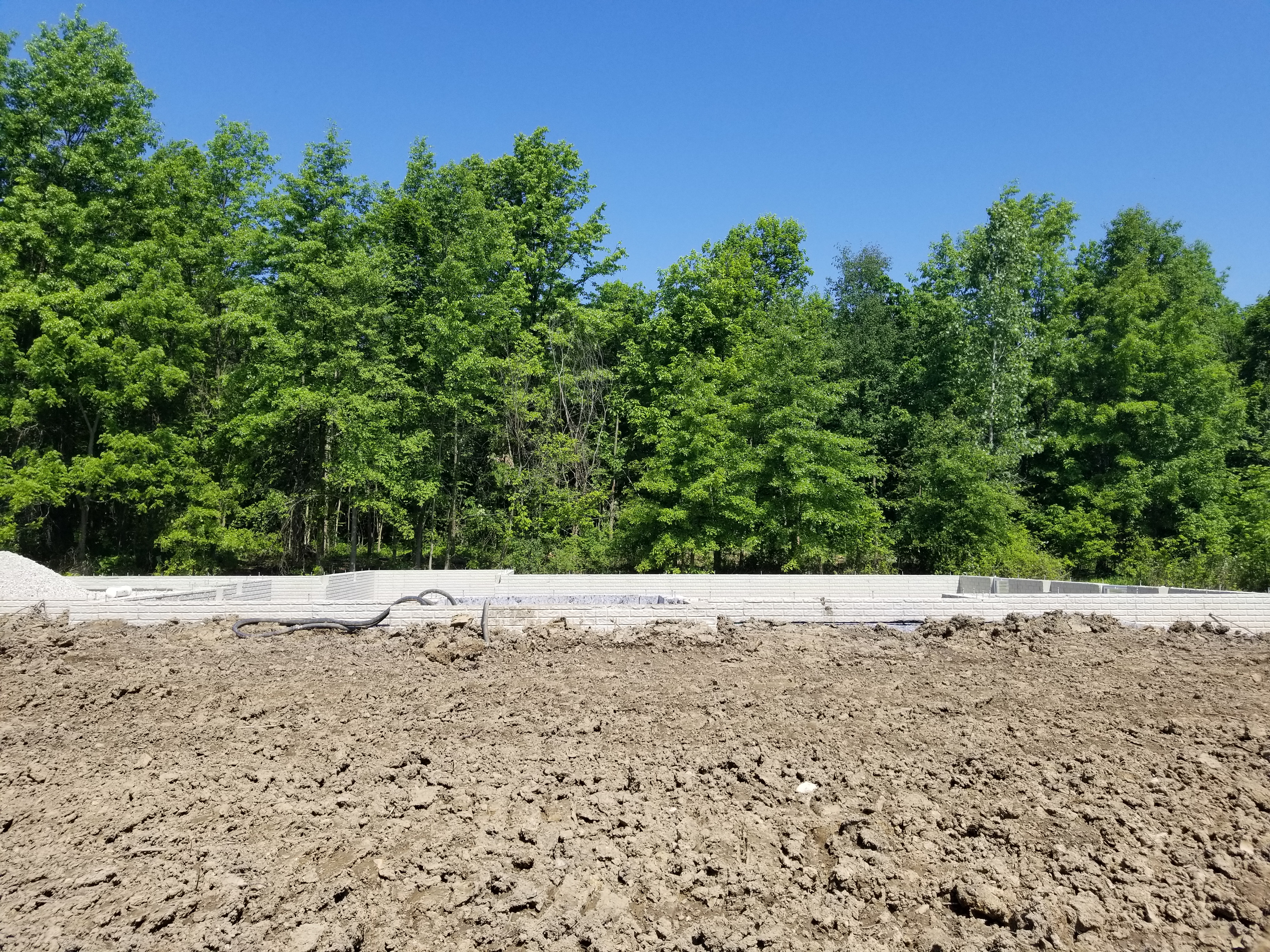 I didn’t take a picture of the work we did that day, but basically we were dragging all the brush we have been cutting in the front near the road into a big pile behind the front tree line on the dirt.  Now that the grading for now is done, we can stack it all up and we plan burn it up when we have the time to sit out there and babysit the fire.

Before we left for lunch we saw this little guy and a couple more flying around in the trees.  Creative Kid was all excited to see the cardinals flying around.  He loves birds and was so excited watching them.  I think it will be good for him to live surrounded by nature and all the different species of animals he’s not used to seeing out his window in town. Excuse the fuzzy pic, I took it zoomed in through the front window of our car was we were getting ready to leave. 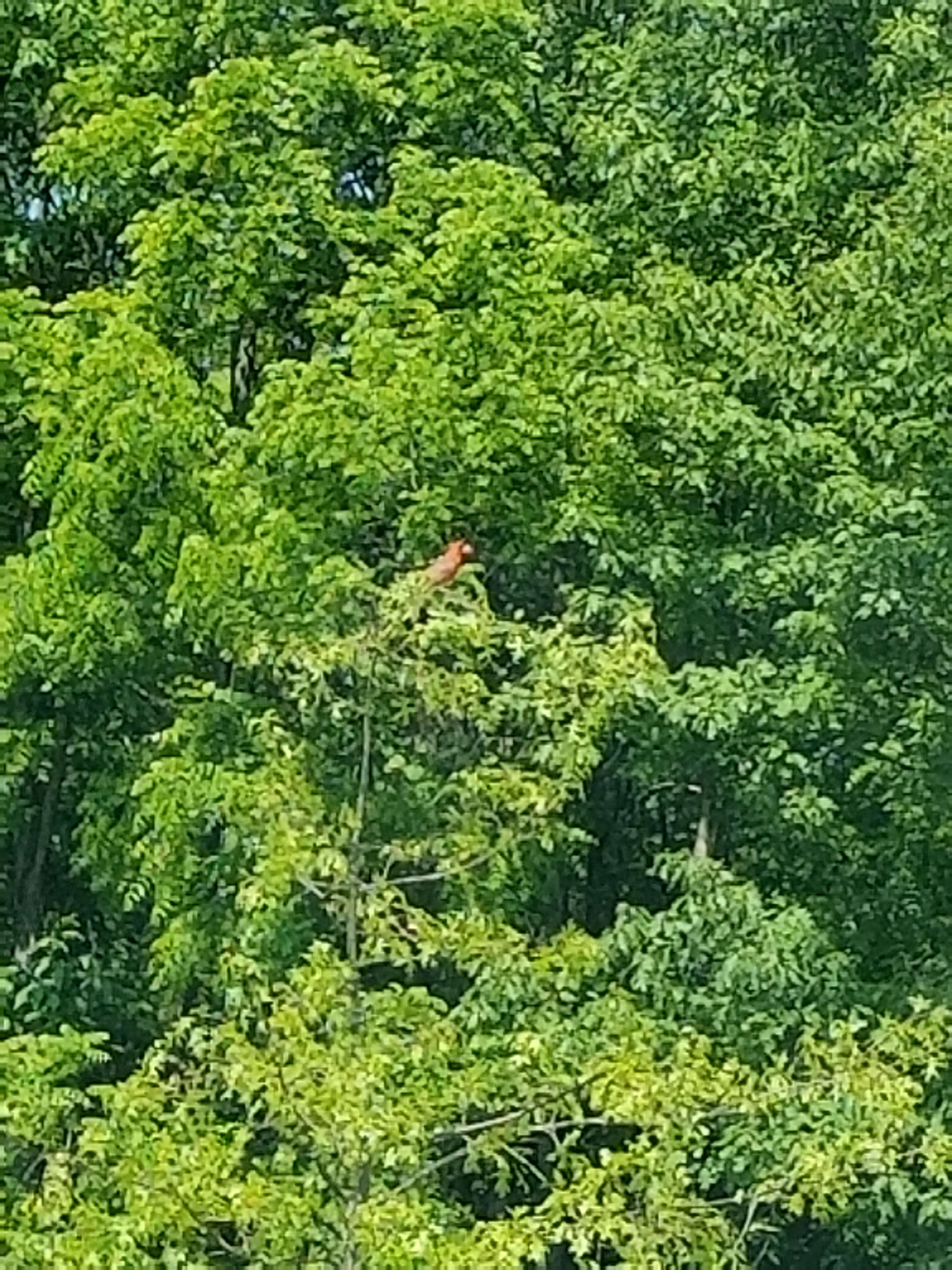 Now back to Mr. Turtle. We came back from lunch to do a little more work.  I immediately went to look for the turtle as he had already moved around a bit while we were there the first time…and he was gone!  We looked all over the basement, peered down to see in every corner, and yet he was no where to be found!

Richard looked up online that some turtles can climb walls…I didn’t know this!  At the same time, I am worried that he could have crawled down into one of the sump pump crocks through one of the holes in the lids and be stuck. 🙁  No one will be out there doing active work for probably a week.

I hope the turtle was the great Houdini and managed to get himself out by crawling up the corner of the walls and the walls do have texture to lend itself to this (this was the type of thing Richard saw online) and I guess that’s possible. I hope we don’t hear about the next work crew finding a dead turtle in one of the sump basins. It’s been so hot I don’t know if it would bake in there and it certainly wouldn’t have access to food.  Where it went may be one of the biggest mysteries of our build.  😀