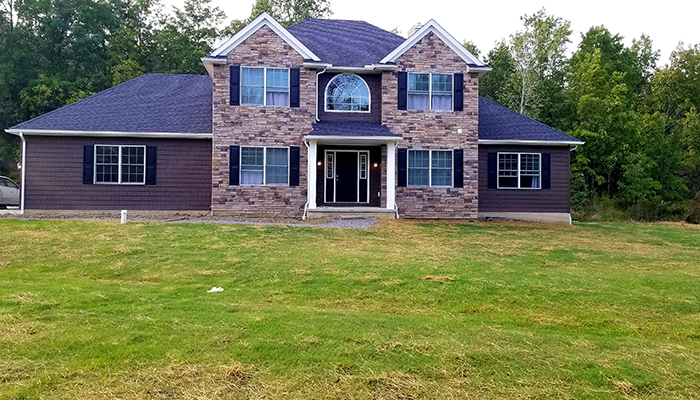 I wanted to bring you all an update on our landscaping project…the quest to get grass. Seems like such a simple thing, right? But it’s been a long time coming as the journey was filled with weather set backs and problems getting contractors set up to complete the grading process.

I took these pictures on Sunday, approximately 11 days after the seed was planted. The seed that was used was from Lesco and is called Teammates. It has a germination time of approximately 7-10 days. So at this point most of the seed has germinated and grown enough to be poking out of the ground. We noticed some seed growing as early as 4-5 days and it is continuing to fill in each and every day.

These pictures honestly don’t do it justice because it makes it look like there are bare spots where you can see the straw, but that is not the case. Those areas are either where the straw is extra heavy or the grass hasn’t grown high enough to overtake the look of the straw. All of the green areas still have straw, it’s just the grass is taller than the straw and makes the straw disappear in the pictures. So without further ado…

And finally here’s a couple pictures from a little sprinkler fun Stephen had on Sunday since we finally got some rain and didn’t need to water the lawn. You can see the grass from the side of the driveway really well in this photo and it’s really going to be a relief when Stephen can play in the yard instead of walking around mud and/or weeds.

So there you have it. That’s where we are right now. We are noticing some small areas here or there where we will have to put down more seed. In particularly there’s an area under the right windows (the master wing) that is not growing. That area gets full sun and has been watered the way we watered all the rest, but there’s also drainage piping there so I don’t know if that has anything to do with the lack of seed germination there. I’m not certain if we will bother reseeding it or not as I’m sure you’ve noticed that we did not have grass planted on the other side of the gravel path either and that’s because we plan to have bushes/plants there and I imagine we will probably have some on the other side as well. So it seems pretty silly to reseed those areas to fill in more if we’re going to have to rip it out later for additional landscaping projects anyway. ?‍♀️

So tell me how you think it’s going after less than 2 weeks of growth. We’re pretty happy with it so far and can’t wait to see it once all the grass has grown, had it’s first cut, and the straw starts breaking down.