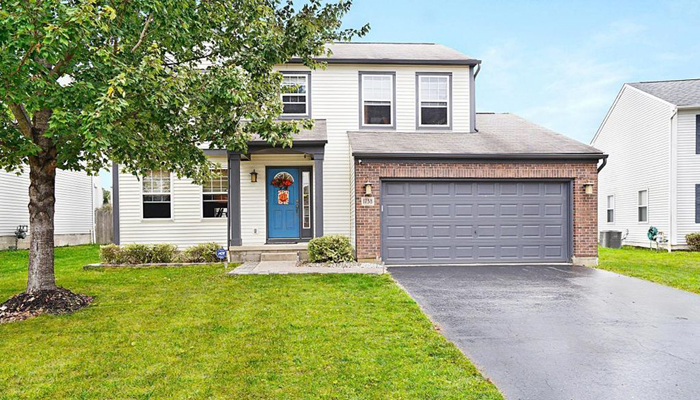 So where should I start on our home journey?  Let me first tell you about us and our history in our current house.  We have lived here for 16 1/2 years.  When we bought the house we never planned to be here this long.  This was our starter home and we thought we’d be here about 7-10 years.  Well here’s the thing about life, you can never predict the future.

By the time we were serious about selling the house, the housing market had busted.  People were upside down in their mortgages, there were foreclosures all around us on homeowners who had chosen Adjustable Rate Mortgages (ARMs).  Selling our house at that time just wouldn’t have been a good financial decision.  We would have lost money on the house or at the very least only broken even.  Years of mortgage payments would have equaled no equity.  So we waited.

As we waited, our house got older and needed more updates and repairs…updates and repairs we didn’t always have the money to make.  We also had a baby a few years later.  Moving was the furthest thing on our minds during that time as we adjusted to our new family.  But as our son got older and my husbands’ hour minimum commute took it’s toll on our family time, selling our house because a priority.

So when Creative Kid was 4 years old, we sat down and made a 2 year plan to get the repairs and updates done on the house to position us to sell by the spring of 2018.  I literally made an Excell spreadsheet and we went room by room listing things like paint, new flooring, new lighting, etc that was needed.  I then divided that list of things up over 2 years with light, medium and hard efforts listed so that we weren’t overburdening any single time of those two years.  We wanted it to be something we could accomplish and I am one who needs small wins along the way to stay motivated, so I made sure that there would be small victories throughout the process.

Honestly, deep in my mind I still didn’t think it was possible.  We had so much to do on the house and so many years had went by where we were wanting to sell that my mind really couldn’t accept the possibility that we would succeed.  But the plan was made, the list of tasks were divided out and we started plugging away at it.

We went at the list pretty hot and heavy at first, but our summer became a little crazy and we dropped the ball a lot.  By fall we realized we needed help if we were to stick to our time table.  We planned to hire a contractor or handyman to remodel some bathrooms and do a few other random tasks that were either a bit above our expertise or would just take us too long to accomplish.  We realized that there was just no way for us to stay on track if we tried to do it all ourselves.

We continued to plug away at smaller items that we could complete while researching and contacting contractors and handymen.  I figured this process would take a couple of months, tops.  We interviewed 2 places by the end of the year and were not happy in one way or another with their quotes.  So after the first of the year I felt we started over in researching companies.  In the end we came back to one of those first two people and had them scale down what they quoted out for us and went with them, but the whole process took about 6 months just to get to the point of signing a contract.  Then we had to wait until our job could fit into their schedule.

In the mean time we had all new carpet installed, continued installing new light fixtures and in general trying to pick off any job from our list that we could.  We had a death in the family that took us away from the house for a week and when we came back we doubled down on our efforts to move forward because we don’t just sit and wait well.  We found a handyman to do some repairs on our deck and a painter to paint some rooms and then got a call from our contractor with news they could fit us in around the same time as the other two people were to do work on the house.

It was a crazy July.  Seriously, crazy.  I was coordinating schedules with all these people, trying to do my own projects, people were constantly coming in and out of my house all the while trying to keep Creative Kid out of their hair, starting to look for houses to buy and preparing for Bible School the first week of August where I was in charge of the Science & Craft Station as well as set design.  I thought I was going to lose my mind, but somehow managed to get through it.

August brought on Bible School, power washing and painting the deck, power washing the house, installing tons of pavers to add curb appeal, etc, etc.  The list was getting smaller, but certainly wasn’t over.  I needed a serious break and we backed off looking for a new house while I just focused on Creative Kid’s new homeschool year that was going to start in September and finishing up the list.

Yes, I said FINISHING up the list!  We had done so much over the summer that by mid-August we were about done with the list!  We had a few things we removed because they had little return on investment and a couple others we determined didn’t really need to be done to sell the house, but in the end we had finished our 80+ item list about 6-8 months earlier than planned!

By Labor Day weekend, we thought we were done and could bring in realtors and put the house on the market soon.  However, the same day we were having a “No More Labor, Labor Day Cookout” with our family to celebrate, we discovered one of the repairs the contractors preformed did not fix the problem.  Ugh.  I was so disheartened.

Over the next month we waited until the contractors could come back and look at the issue.  It required cutting into our ceiling, finding a seal they put in was not the right one, then having someone patch, mud and try to match the texture of our current ceiling as best as they could.  Then the ceiling had to be painted.  Literally this got finished less than 48 hours before our listing for our house was set to go live.

It’s been a crazy journey to get where we are now, but as of yesterday morning, we finally put our house on the market.  I’m excited and nervous all wrapped into one.  I don’t know if it will go quickly or if we will be waiting a while.  This is not the best time of year to be selling a house, but our market has been rebounding the last 2 years so I am hopeful.