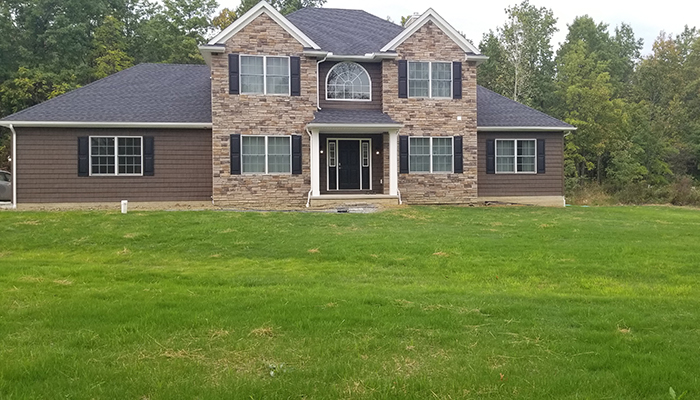 This past weekend commemorates one year we’ve been in our new house. It seems like it’s went by very quickly. I think part of that is because we still have so much to do before it’s complete. Whether it’s landscaping, furniture we need, decorating that needs to happen or outdoor features we have planned…there’s still a lot to do.

At the same time things have come a long way from the rooms of boxes that dominated the space for the first month or so and continued to be an issue in one or two rooms for many months after that. We have some organizational systems in place and have bought lots of furniture to complete some rooms. Our sun room still needs a lot of figuring out as other rooms were higher on the priority list. We have curtains on all bedrooms and the forward facing rooms, but still need to put up curtains in the garage, living room and sun room (although those will be more like sheers that I gather in the corners more than anything else) and we eventually need blinds as the black out curtains are not really black out.

Some things I had planned to get accomplished by now, but haven’t include my barn doors for the homeschool room and the backsplash in the kitchen. Furniture was higher on the priority list than both of those items so they got pushed to the back burner. I have had a hard time finding the barn door I envisioned when I added them to the plan, but have found some DIY kits on Amazon that look like the door I wanted so right now I plan to purchase them, stain them myself and buy the hardware for them….when we get to that point. The backsplash I had already picked out but I need to get some estimates from installers to figure out the total cost. Sometimes the list seems never ending.

Outside this first year was filled with great successes in the beginning with the grass seed we planted last fall in the septic area to great disappointments with not being able to get the rest of the yard graded and seeded in the spring. However, right now I can look out my window and see grass all around me and that’s a beautiful thing…even if it did take a while to get here.

On the house issues front, we really haven’t had a lot of house issues. We had a few things at first that had to be addressed, but we really haven’t had a lot since then. Wayne Homes has been very responsive whenever we have had an issue and have worked to fix the issue until we were satisfied. To further toot their horn, I will say that I am amazed at how energy efficient our home has turned out to be. Right now I can say confidently that our utility bills are less, you read that right LESS, in our new 3000+ square foot home than they were in our prior less than 1700 square foot home. That doesn’t include the 2,000+ square foot of basement that also has vents that are in use either. Craaaazy. Seriously, this house holds its temperature very, very well and I’m so relieved that the hype was not just hype!

Looking on to next year, I hope we can get some additional landscaping accomplished. We’d especially like to get some trees planted, some other trees removed and some shrubbery and flowers added to the front of the house. On the inside, I’d love to get the prior two items crossed off our to do list as well as complete my gallery wall and add a bunch of other decorating touches. Making the sun room a little oasis is also high on my list.

I though I would finish up with some comparison photos to see where we’ve come from about a year and a half ago to where we are now. I’m excited to see where the next year takes us!