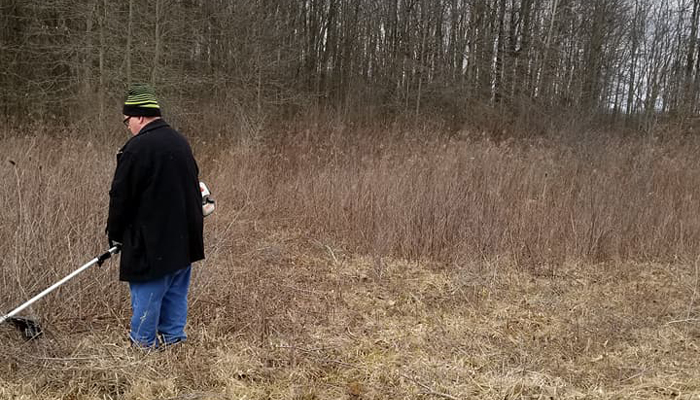 We decided we would use this weekend to try to clear the brush, weeds and saplings ourselves and save us a little money.  We had purchased a multi-tool off of Amazon that had things like a pole saw and brush cutter on it as well as a hedge trimmer and grass trimmer for use in the future.  We figured the land is dry enough that we should be able to get a lot of it done this weekend and we could save several hundred dollars by doing it ourselves.

So Friday afternoon we got the multi-tool put together and started working on the land.  It went okay that day, but we got a late start since we were waiting on a replacement bolt that either was not in our original box or was lost during the move, so we only worked for an hour or two before calling it quits.  At this point we were fairly confident we could do the work ourselves and cancelled our previous land clearing guy who was set to send someone out on Saturday morning originally.  We didn’t got get in touch with the guy, but left a message on his phone and presumed we would go back out Saturday morning after breakfast to spend a full day and finish clearing the land.

Saturday morning comes and we go out for breakfast before heading to the land and we get a call at 8:40 a.m.  It seems the land clearer didn’t get the message and his worker is out on our land ready to do the work with the brush hog.  He’s asking when we are getting there.  Now originally we weren’t supposed to meet them until 9, so I am a bit irritated on multiple fronts.  My husband explains that we left a message and canceled for the day and that we don’t need them.   We finish eating and another call comes, this time from the owner and he says he didn’t get the messaged and says his guy had already been clearing when he called us and tells us to go out to the land and take a look at what has been done and pay them whatever we think is fair. Now I’m annoyed more that not only did the guy show up when we called it off, and showed up early, but the guy started clearing without us being there.  So much ugh.

We get to the land and we realize that what he did clear about 40% of it isn’t on our land even though the stakes are clearly marked!  More frustration.  So we get started after dragging all of our stuff out onto the land and I start by stringing line between the property line posts so that there are no misunderstandings between any other contractors in the future while the hubby starts using the multi-tool to clear.  He clears for a while with the brush cutter and then switch off like we did the day before.  The tool has a harness but honestly it’s hard to use and it’s just easier to hold it the whole time, but it tires your arms out after a while.

I am maybe 5-10 minutes into clearing and the tool literally comes around in my hands.  Like the top and bottom disconnect while the motor is running and the blade is spinning.  Thankfully it comes apart and falls to the ground in front of me and not on my feet.  The tool was loose from the beginning, but I didn’t expect this!  I try to put it back together but the button that is supposed to hold the two parts together just will not stay stiff enough to keep the two ends together.  We quickly determine we are no longer comfortable using this tool even if we could find a way to get it to stay together.  I hate that we’ve dragged all of our supplies out into the middle of the field and have gotten only about a half an hour’s worth of work done!

Not ready to give up quite yet, we resort to using loppers to start cutting the brush.  It’s hard work, but we do make progress.  After about 45 minutes of that though we realize we are just exhausting ourselves for little gain and decide we cannot get this done today.  Feeling a bit defeated, we pack up all of our stuff and go home.  On the way back to the apartment we made a plan to rent a brush cutter from a hardware store and go back out on Sunday to try to finish up.

Sunday comes and we pick up the rented brush cutter and take all of our supplies back out to the land.  We spend several hours clearing but it’s a big job and it’s hard to do when you’re now stepping on all of this brush that we’ve cut that at this point is several inches thick with briars, thorns and small sapling stumps sticking up out of the ground.  You’re literally fight just to walk through the debris and that debris is everywhere.  We finally resign ourselves to staking at the approximate place we want to put the house and clearing all the rest of that land only because it’s day 3 and we’re thoroughly exhausted, both mentally and physically.  We settled for ‘good enough to get Wayne back out to stake the house’ versus 75% cleared, which is what I was aiming to accomplish.  On top of that, I thought it would take a day to a day and a half and it’s taken up almost our whole 3 day weekend.

At the end of the day, when we’re home and licking our wounds we wish we had not attempted a job this big on our own and would have just continued with the original plan and not called off the land clearer on Saturday.  Yes we would have saved ourselves a few hundred dollars if we would have gotten it all cleared, but we obviously underestimated the enormity of the job.  We wasted time, now have a broken multi-tool, spent money renting a different tool as well as on ancillary expenses like eating out too much, buying extra snacks and various small items to accomplish the task and in the end we’re still going to have to have someone else clear the rest of the land.  Live and learn.