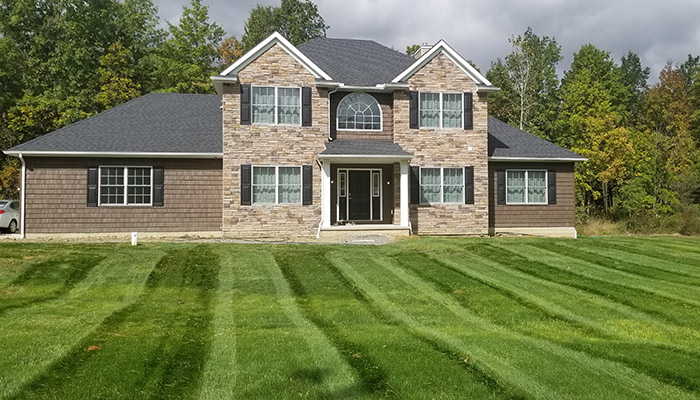 So the grass had it’s first cutting today. We contacted our landscaper a couple days ago to find out when it would be good to back off the daily watering now that it was growing so high. He gave us some advice on that and said he’d send someone out to do the first cutting and to fertilize again and that happened this morning. The cut was minimal and the grass is still pretty high, but I imagine they didn’t want to take too much off at first.

Today would be day 24 from planting the seed and let me tell you, it looks so great. It’s so much better than I thought it would be after only 3ish weeks. It’s fairly thick, it’s a beautiful color, it’s really uniform…honestly it’s better than what the grass looked at our old house even from the start when they put in turf in the front third of the yard. Seriously. So. Much. Better.

Here’s some photos I took today after they were done. All of these pictures are natural/no filter and as you can see it was a pretty cloudy day with not the best lighting and yet the grass still looks awesome in these photos.

Oh and I realized I never really took any pictures of the side yard during this process. I don’t really think a lot about the right side of the house as that’s where all the mechanicals are like the air condition, the electrical connection, the start of the septic system and all the hatches for the big tanks buried underground, etc. But still it’s a decent amount of space and we may be able to do some things with it. I’m currently trying to figure out some ways to disguise the septic hatches and/or ways to make them easier to mow around in the future.

Now that is not to say there aren’t some problem areas. We have this one bare spot in the front yard that we don’t know what happened with..did it not get enough water? Was something sitting on it during germination (like the sprinkler) and kill it? Did it get too much water? We don’t know, but today Richard over seeded the back area where the septic is with seed we used previously back there and so he threw some of that seed down in this bare spot. I don’t know if it will take, but hey we had the seed. It was a similar seed variation from the same company so we figured if we do get it to come up it should blend in well.

The other areas that had issues were up near the house. Facing the house, on the left side, no seed was sown between the house and the gravel path because we will eventually be planting shrubs and plants there. On the right side of the house however they graded and planted all the way up to the house. These areas didn’t come up as well along with the area to the right of the gravel path by the porch. I figure we didn’t get these areas quite as well with water and with the eves they got more shade and less sun. I honestly don’t plan to try to fix these areas because in reality we will probably be planting shrubs and plans on that side as well and will be tearing out the grass eventually so why bother trying to make it look picture perfect now only to tear it all out in the future.

All in all we are really pleased with the results though and would definitely recommend the landscaper we used. If you live in the Marysville, Dublin, or Plain City, Ohio area be sure to check out Garden of Eden Landcaping Services.