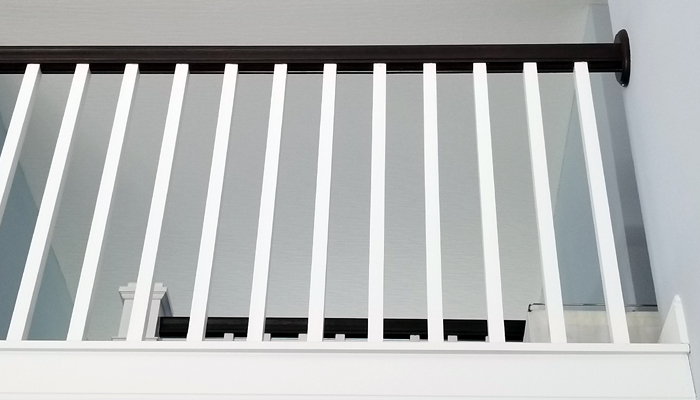 In the fall of last year we had our first warranty issue. Two issues actually. We had a couple of the spindles on our railing across our 2nd story that had become loose at the top where they hooked into the post. The other issue was the door to our office/guest room was sticking significantly. We called Wayne for the first issue (we noticed it first) and got a response right away that they would come out and look at it.

The warranty manager for our house was very nice and friendly. He looked at the spindle and tried to fix them himself with some extra finishing nails. We had a couple other questions as well, but they were outside the warranty coverage and really didn’t have to do directly with the build that he gave us some good advice on.

Unfortunately a few days later Creative Kid barely touched one of the spindles and it popped out again and the finishing nails were not a fix. We contacted Wayne back and the warranty manager made plans to come back out but this time he was going to bring a carpenter with him. We also told him at that point about the door and they were going to look at that while they were here as well.

The carpenter was great. They not only fixed the issue but replaced the spindle totally (we had extras from the build) and even explained why it was doing what it was doing. It was a small mistake on a couple of spindles out of 40-50 spindles and they fixed it properly and it’s been great ever since. They checked all the other spindles while they were here and then made adjustments to the door that was sticking. It helped at first, but over winter it started sticking again and got to the point where we couldn’t close it for fear we would have to do damage to the door to get out. We had a lot going on though and didn’t call in another warranty claim until this summer when we also had a couple other things we wanted looked at.

Again the response was quick and he came back out and made even more adjustments to the door that was sticking. Again it is better now, but it’s only been a couple of weeks so hopefully this time it’s permanently fixed. One of the new issues is a drywall issue where two seams obviously come together. Like the door it was worse over winter (humidity changes) and it looked better by the time they came out. He said unless the seam is completely open, they will wait until next year after another year of settling and have a drywall person come out and fix any drywall issues before the end of the 2 year warranty. The issue is in our stairwell where I want to put up a gallery wall of art and pictures, but I was nervous about doing so near this seam issue, but he told me to go ahead and put up whatever I want…that it will get fixed regardless when he brings out the drywall contractor next year.

Finally, and probably the biggest issue to us is that we have a crack happening in our basement at a corner where two walls come together and a support beam sits upon it. We sent in pictures and he looked at it and basically said unless the crack gets closer to the floor they won’t do anything about it and to just keep an eye on it. He seemed to indicate we will evaluate these things after another freezing and thawing and settling cycle. Of course he also reminded me that we have a 10 year structural warranty.

We will be keeping a close eye on this last issue because this waiting and seeing and you have a 10 year structural warranty stuff doesn’t exactly leave me with warm fuzzies. ? I know it’s factual, but it’s also unnerving to see a possible crack down a foundation wall. He showed me where the support beams rest on a metal plate and of course that metal plate spans more than just the corner of the concrete where this crack has formed, but it’s still a bit unsettling. He told me to contact him back if we saw any shifting/bowing of those cracks or if it got what I would estimate as about a foot from the floor.

So that is how our warranty issues have went thus far. I will say Wayne Homes is very responsive. I understand not wanting to send someone repeatedly back out every time drywall issue arises due to settling as there is bound to be more settling in the first couple of years. Of course it sounds like if it was something egregious they would have fixed it right away. The crack in the basement is really the only thing right now that makes me a bit uneasy. Our build manager had the foundation contractor come back out towards the end of our build because he didn’t like the way the frame had come off (we opted for poured walls) and caused some missing concrete/crumbled look where two other pieces of wall met at a corner like this one. He didn’t want it to be a future issue so I guess I don’t quite understand why this crack, which is worse IMO than the issue during the build, is not quite getting the same level of concern. Time will tell…