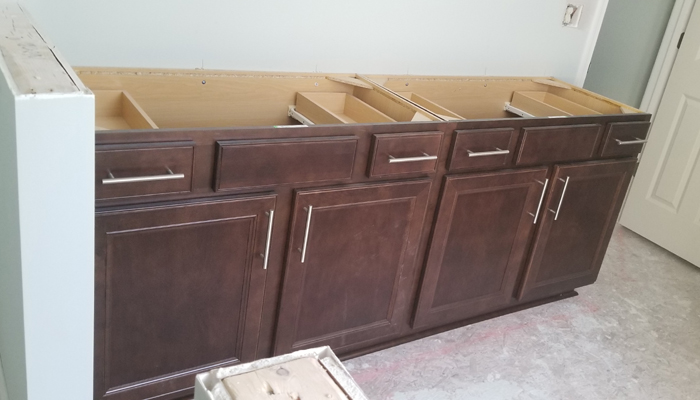 So when I last posted I was concerned about the under cabinet lighting cable that was blocked in the wall behind the corner cabinet and I had a few photos from Monday (day 114) that I hadn’t posted yet.  I’ll start with the work that was done yesterday that we weren’t expecting.  The HVAC people were back on site to run the gas lines to the furnace and the stove and of course put the point of entry on the outside of the house.

Pipe coming into the house:

Pipe going into the furnace:

Line for the stove:

Entrance point into the house, underneath the small window in the laundry:

Now onto the under cabinet lighting cable issue. Our Field Manager contacted Richard and let him know that he was onsite working with the cabinet people to fish the cable out of the wall.  When we came last night this was a beautiful sight to behold and as you can see, they didn’t have to tear up the drywall to do it, so no repair is needed.

Now onto other things we found when we arrived last night (day 115) to see the progress.  First off, more trim was done.  Most rooms have baseboards and a lot of rooms have baseboards and quarter round.  None of this is attached to the wall yet, just measured, cut, and laid out so they can be installed after the flooring is done.  Also a lot of doors ways and windows have their trim installed.

Here’s a picture of trim but also you can see the door knobs have been put on.  We realized something though and that we paid an upcharge for a privacy lock to be put on our bedroom door, but it never occurred to us that there wouldn’t be privacy locks on the bathrooms by default.  Looking back there were several things that were just kind of glossed over and this is definitely one of them.  So we’re going to have to get the product number of the handle with the privacy lock feature and get 2 of them for the powder room and the main upstairs bathroom and replace the existing handles after we move in.  As I said, we paid to have one put on our bedroom door so I’m not concerned about our master bathroom having a privacy lock, but the other bathrooms in the house should definitely have them.

The game room upstairs is not quite done yet:

The doors for the closets are really nice and match our main doors:

Sorry these are so dark because of the light coming in from outside.  I need to play around with my cell phone to see if I can do something to fix that.

Other little touches we took note of:

The mantle is up:

The wood cap is on the top of the pass through from the kitchen to the great room.  This is another item that was glossed over.  Richard asked me what color it would be and I’m imagining by default it will get painted white.  I would probably have preferred it to be stained the same color as the cabinetry or I might have paid to have granite countertop put on it to match the kitchen, but I don’t really remember us discussing it in the design meetings.  We discussed the tub ledges and we paid to upgrade them to the countertop granite, but this one I don’t remember us going over.  Then again, I think the tub ledges we went over because I asked what they would be and from there I decided to upgrade them.

All the cabinets in the bathrooms were installed.

About 2/3rds of the wood stairs were installed.  They seemed to stop where the temporary rail stops. I assume they will continue today and start putting in the permanent rails.

Onto changes in the kitchen cabinetry.

My kitchen desk!  I wanted a kitchen desk, it was on my must have list.  I always have a mess with mail and basically this will become my mail and then bill pay station.  It has cabinets above and we put in an ethernet jack so I can put my laptop there and do all the work that goes into managing our household finances and paperwork.  I made a custom change to the plan to put in this table leg on the one side.  It originally had a cabinet type side to it and I saw that being a disaster that would eventually get broke, so I chose a lovely, clean-lined leg to put on the corner instead.  Inside the drawer I think our Mennonite installers left us a gift.  ?

Also you will notice that they got the handles installed on the cabinets.

There doesn’t seem to be handles on one of the bathroom cabinets, but it’s obvious they have at least one more days worth of work.  We won’t be going out there tonight to see what progress has been made and Creative Kid has Taekwondo belt testing tomorrow night so we may not get back out there until Friday or Saturday.

Other issues that have since come up with our propane install.  We had planned to buy a tank and bury it.  We want to buy a tank because this will allow us to shop companies and not be beholden to using one company no matter what the cost.  We want to bury it for obvious reasons…they’re an eyesore. We had planned to use our excavator to do the burying work, but he said the propane company we had picked could probably do it cheaper (after he saw some quotes in an email chain with that company).

Richard went to start getting that set up and the person he talked to at the propane company quoted us a MUCH higher cost for the whole thing.  The tank was $850 more than the quote we got less than 3 weeks ago, some hidden costs were not told to us then and there were some other things that were not said originally.  At this point I don’t know if I trust this company now to do the tank work now and honestly with how many over runs we have done, if we have to go with them we will put off the tank work and just lease an above ground tank until next year.

I was so frustrated that I wanted to start shopping around.  I mean even if this company has the cheapest propane around, who says they are the cheapest for installs?  And I just don’t trust them since our $1800 quote for a tank turned into $2650 in less than 3 weeks.  Richard started calling around and we may have found another company that yes, their propane is more expensive, but the tank, install, trenching and all of it could be MUCH cheaper than the first company.  So we are waiting to get a formal quote from them to find out for sure, because if it doesn’t work out I would rather lease the tank through this winter and then make the change next spring/summer to a permanently owned and buried tank.  We really wouldn’t be effecting anything as far as landscape because we won’t be planting grass in that area until sometime next year anyway.

Our Field Manager is out next week on vacation so he shared with us what the rest of this week and the next couple weeks will look like.  He’s fully committed to getting us in the house in September, but obviously for us the earlier the better as we have to coordinate 2 moves from 2 different locations and we have a move out procedure list that we have to accomplish at the apartment after everything is moved out before we turn the keys over at the end of next month.

Here’s a look at the schedule.  We don’t know what all of the codes mean, but the short and sweet of it is that the stonework is being done this week, Final paint and stain and final electric next week, then a pre-walk with our FM when he is back from vacation the following week, then flooring, tile and final heat.  Of course all of this can be subject to change if something comes up, but this is what things for now. 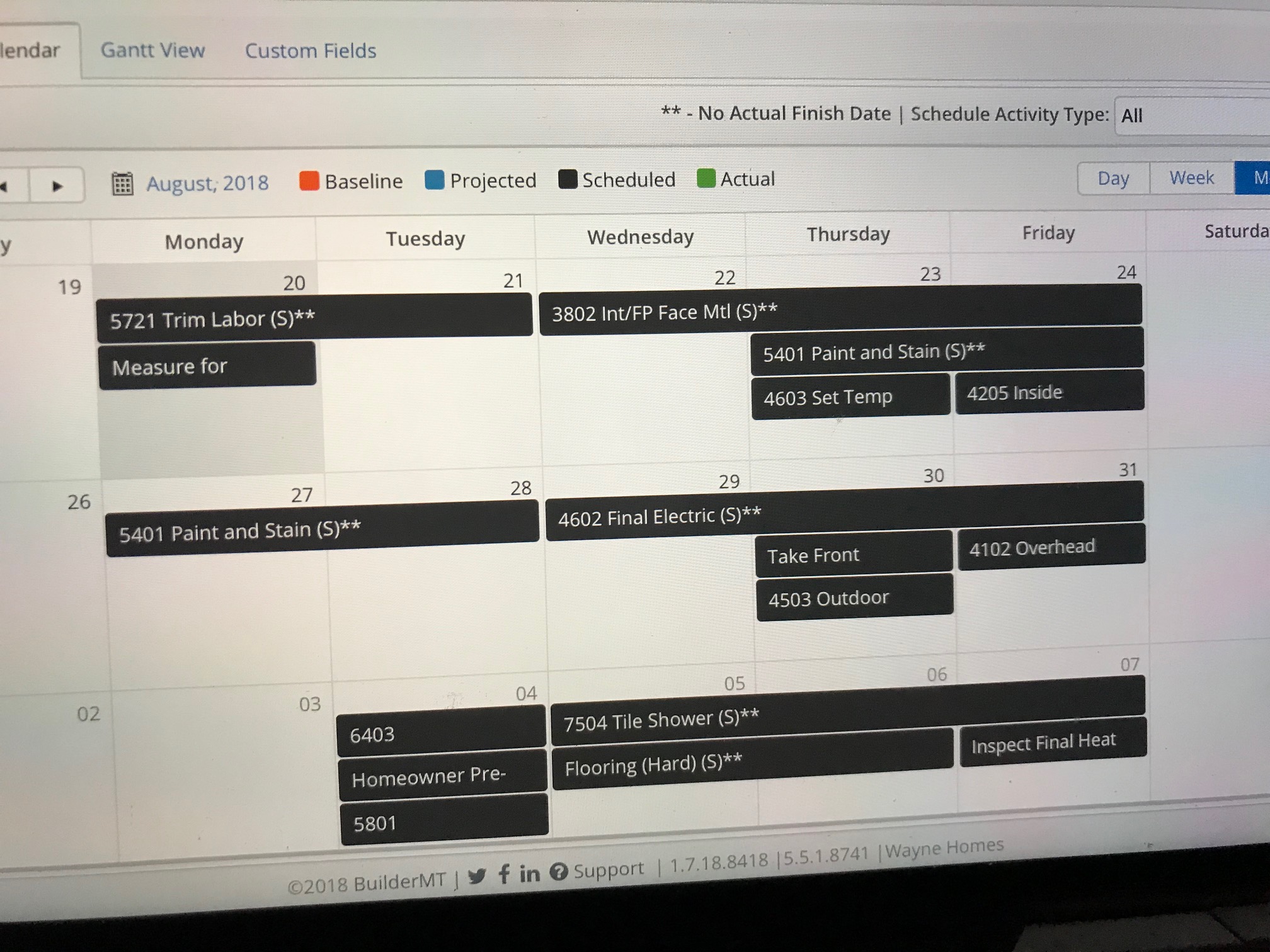