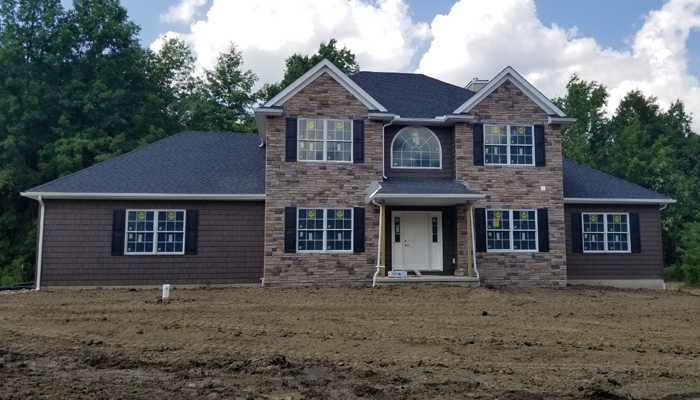 Friday was the 2nd and last day of the septic install.  Our contractor is thorough but efficient and he not only finished our septic, but he also regraded our whole landscaping, put in our permanent water egress from the downspouts and sump pumps and started working on a swale for the channeling of the water from around the leach field.  Union County added to his original plans and had him put a curtain around it because of the way the water runs.  This is basically a french drain that goes across the back of the field (the higher end) and drains around one side to the front (lower end).  Our ultimate goal is to connect this water coming out the exit pipe into the swale and ditch created by the side of the driveway that leads into the pipe under the drive and the ditch out to lower ground.

It’s hard to explain, but all of this contouring and piping should help keep our land dry and not the water logged mess it was when we first bought it.  I’m attaching a picture I mocked up to sort of show what we’re trying to do.  All the water flows from the back and left side of our property and goes down to the front right because of the elevations of the land.  You will also notice that our contractor took great effort to make the piping out of the way of our future projects. 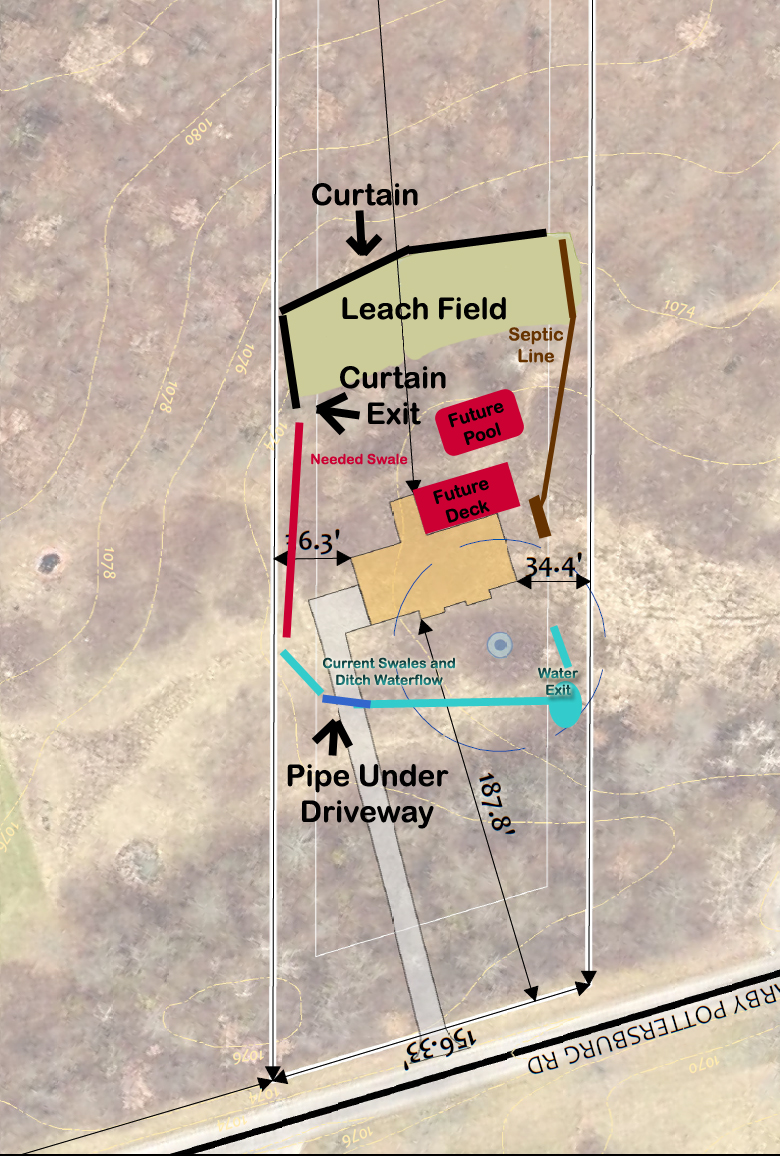 Our contractor was even so kind as to take pictures of the whole system before it was covered up so we will know exactly where all the piping is so we can avoid it in future projects, tree planting, landscaping, etc. 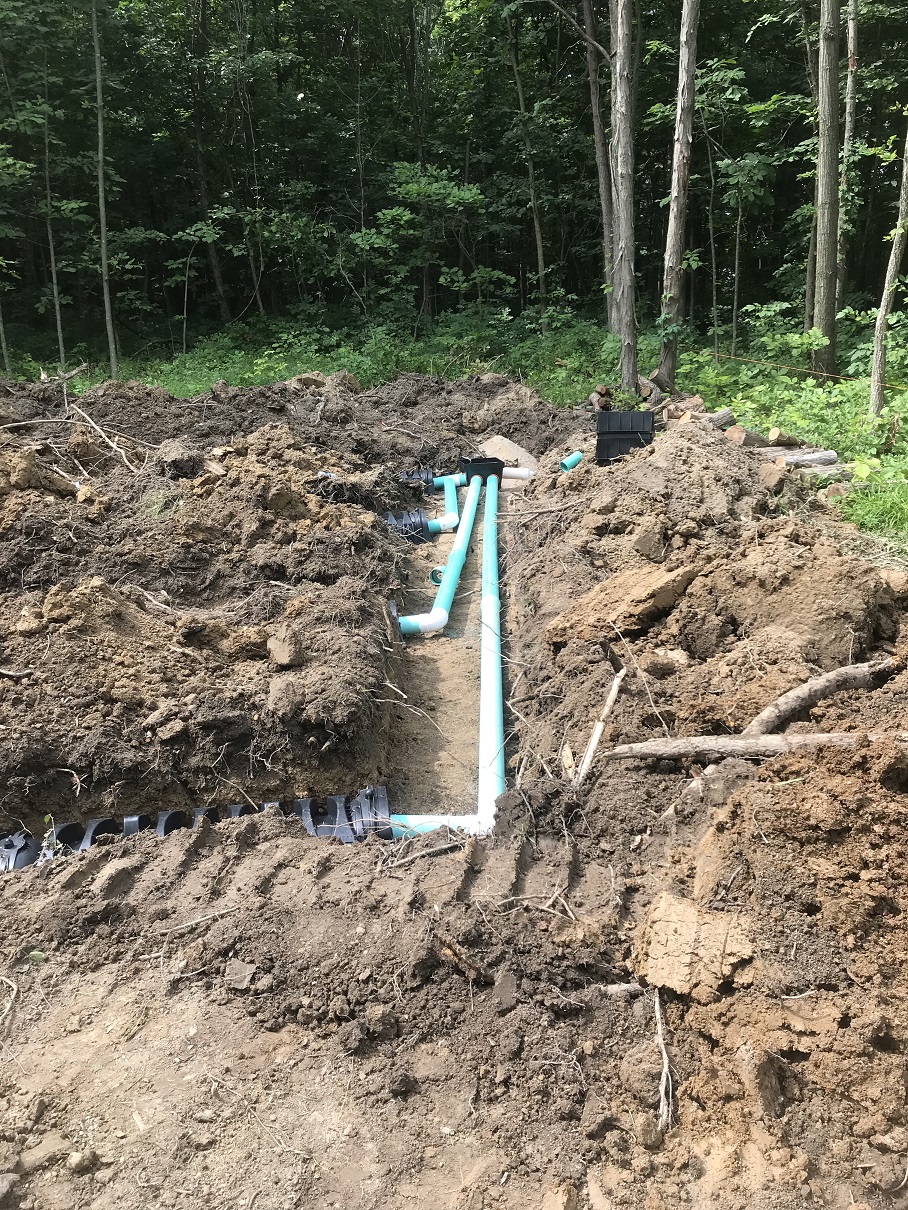 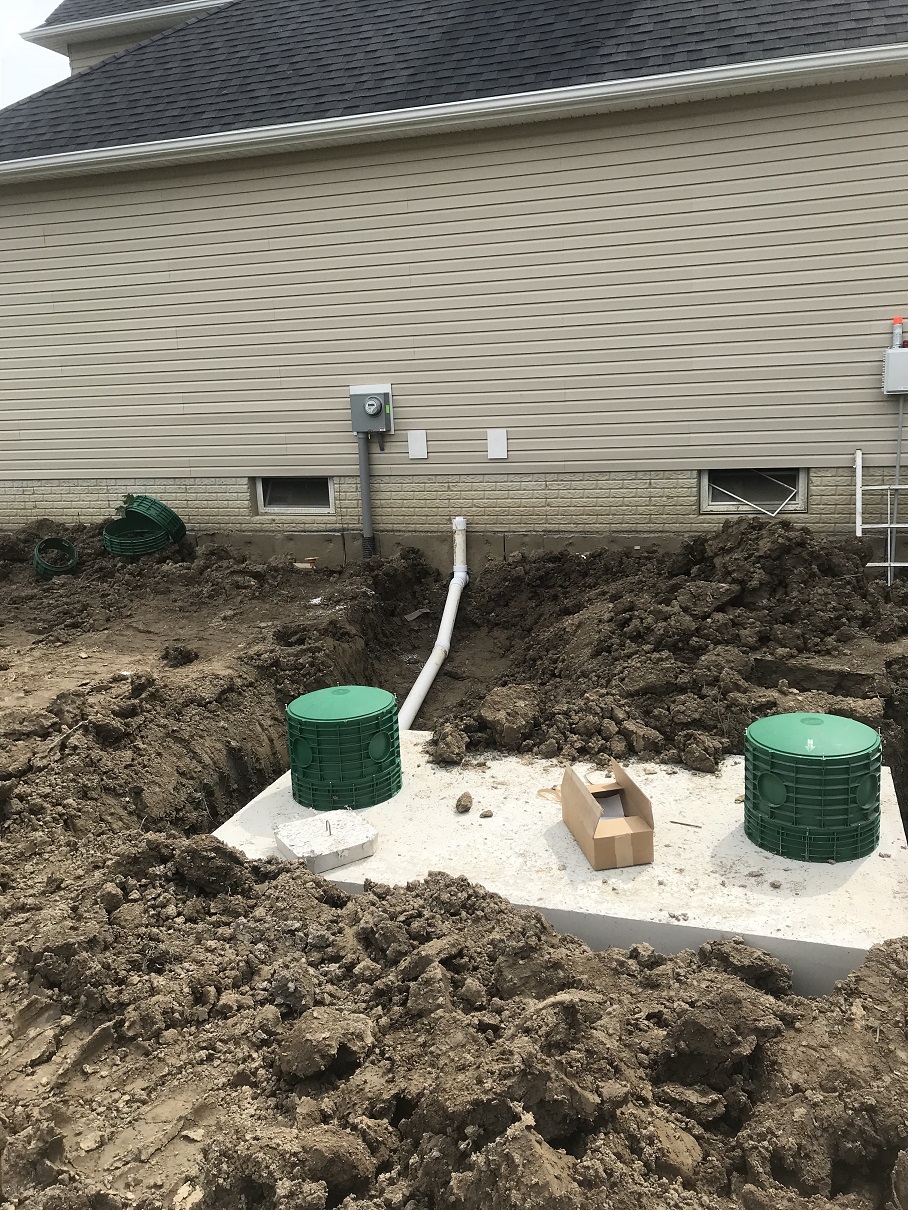 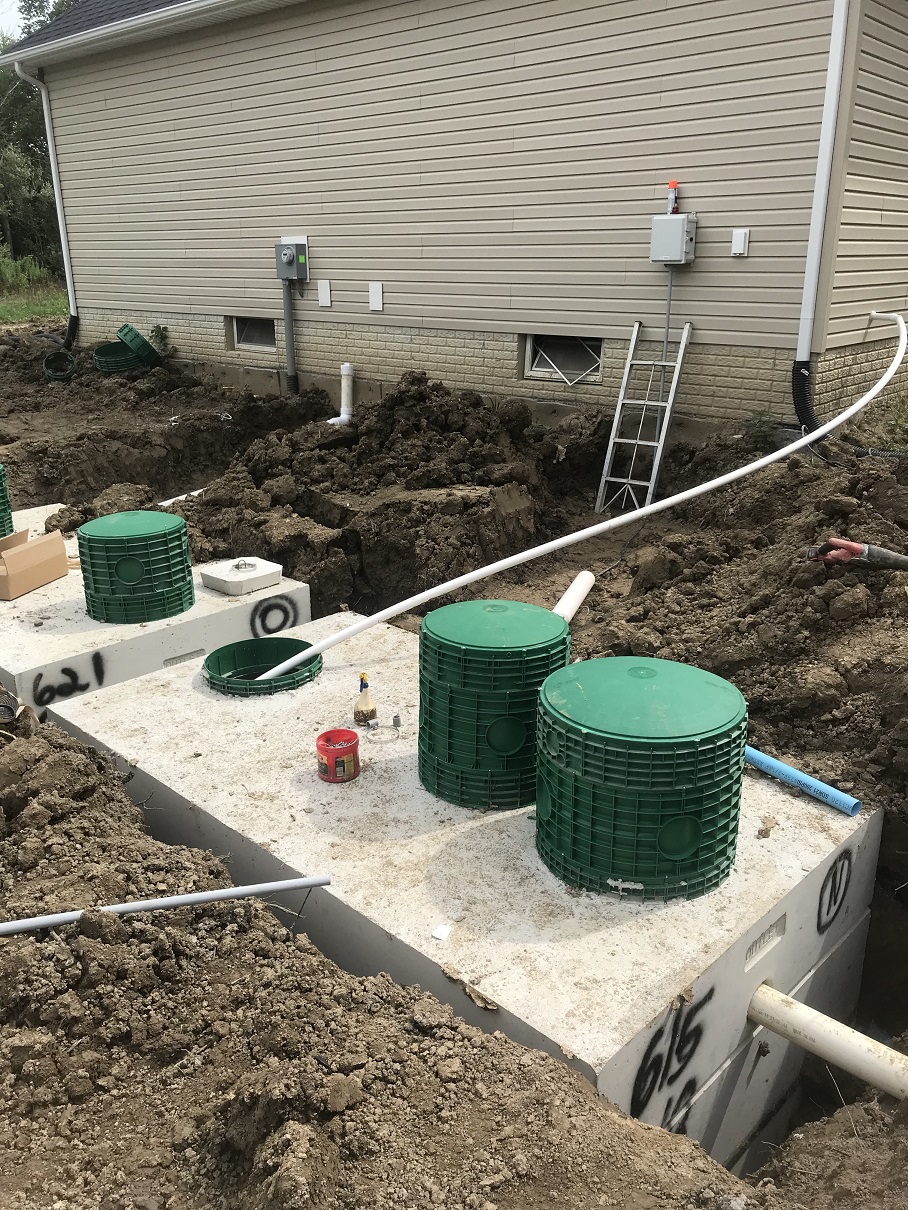 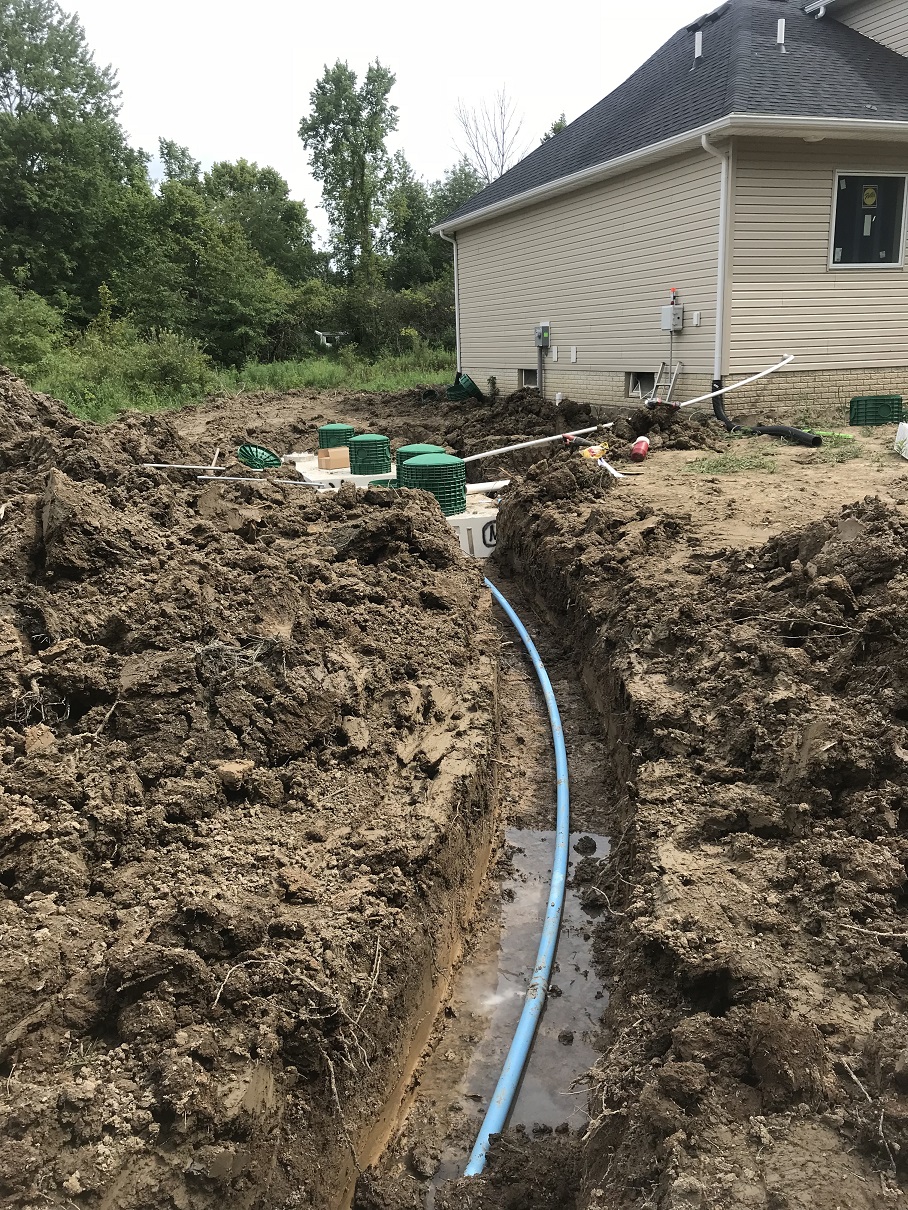 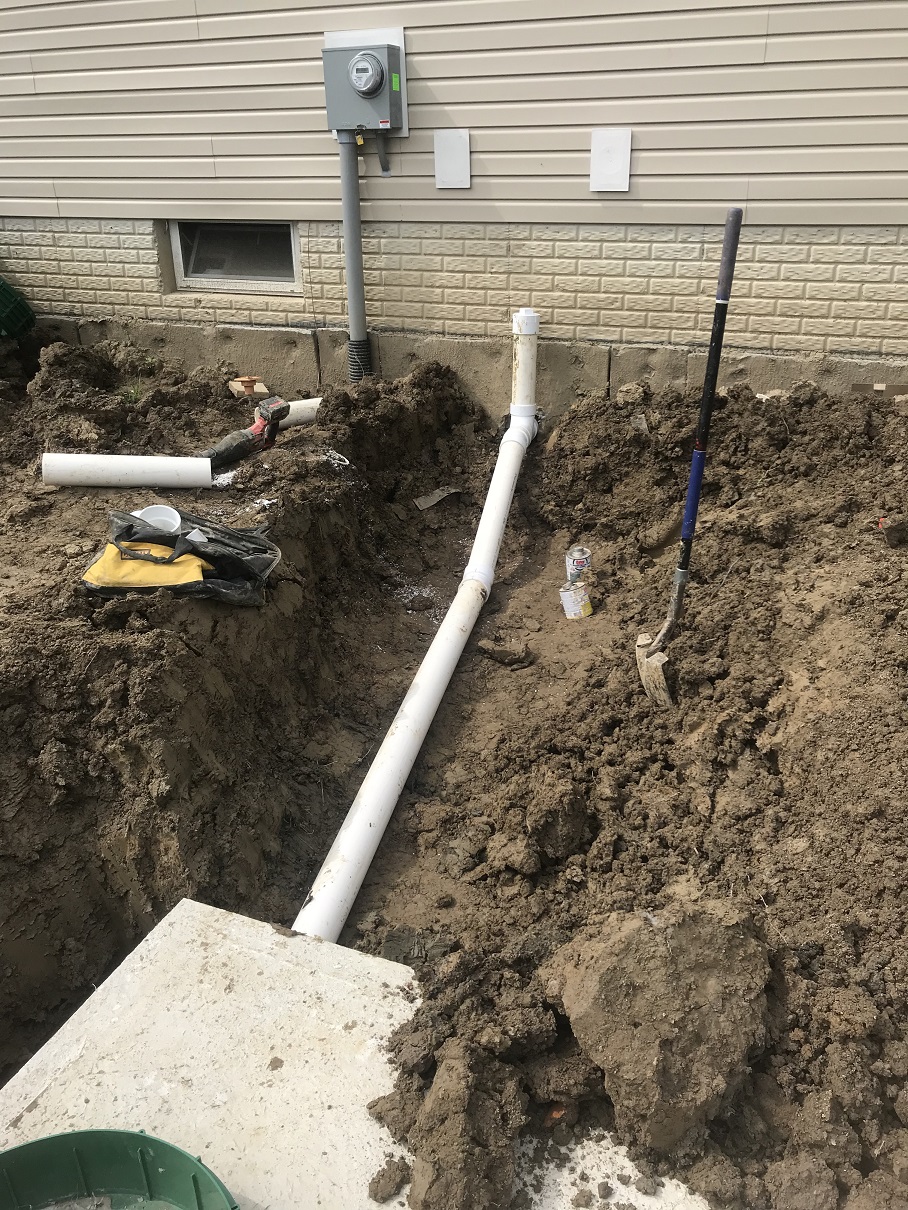 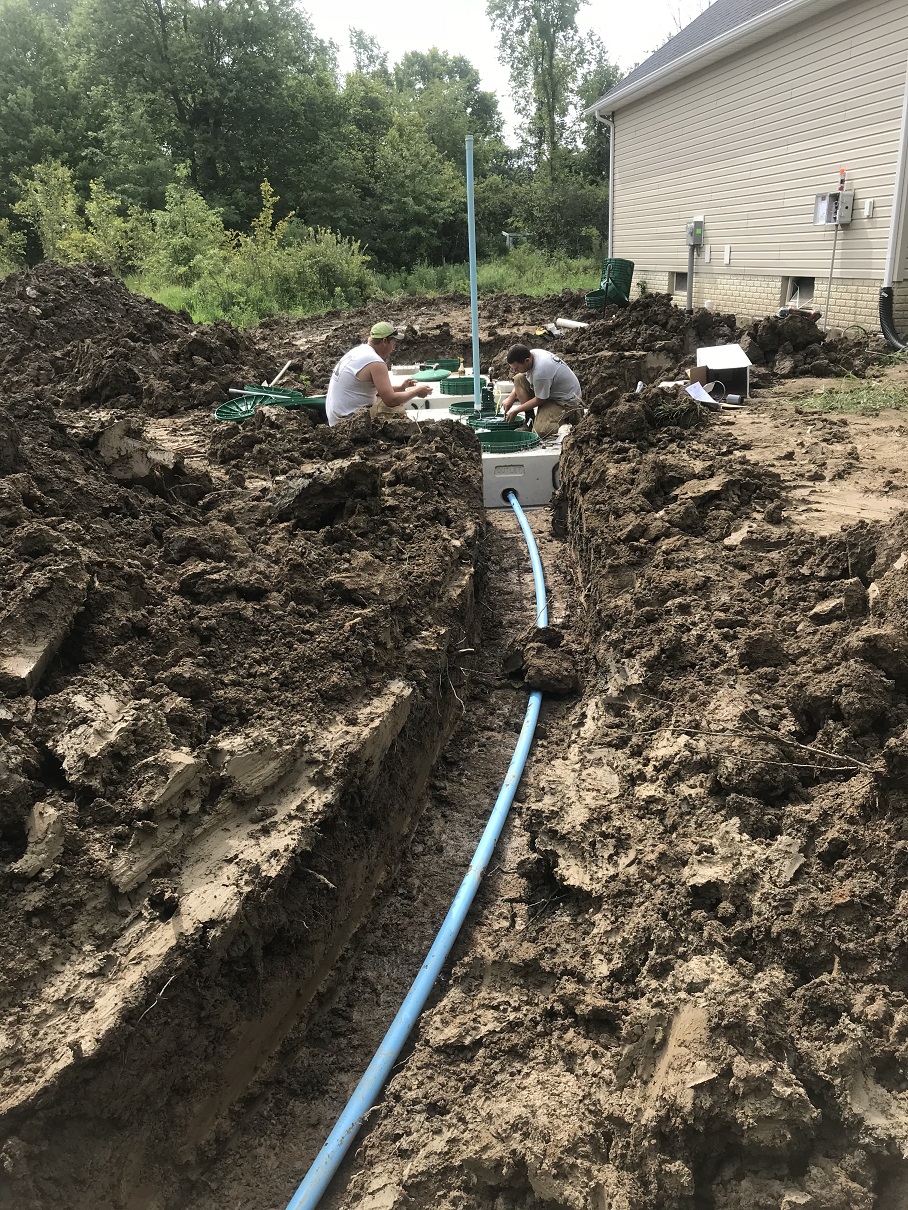 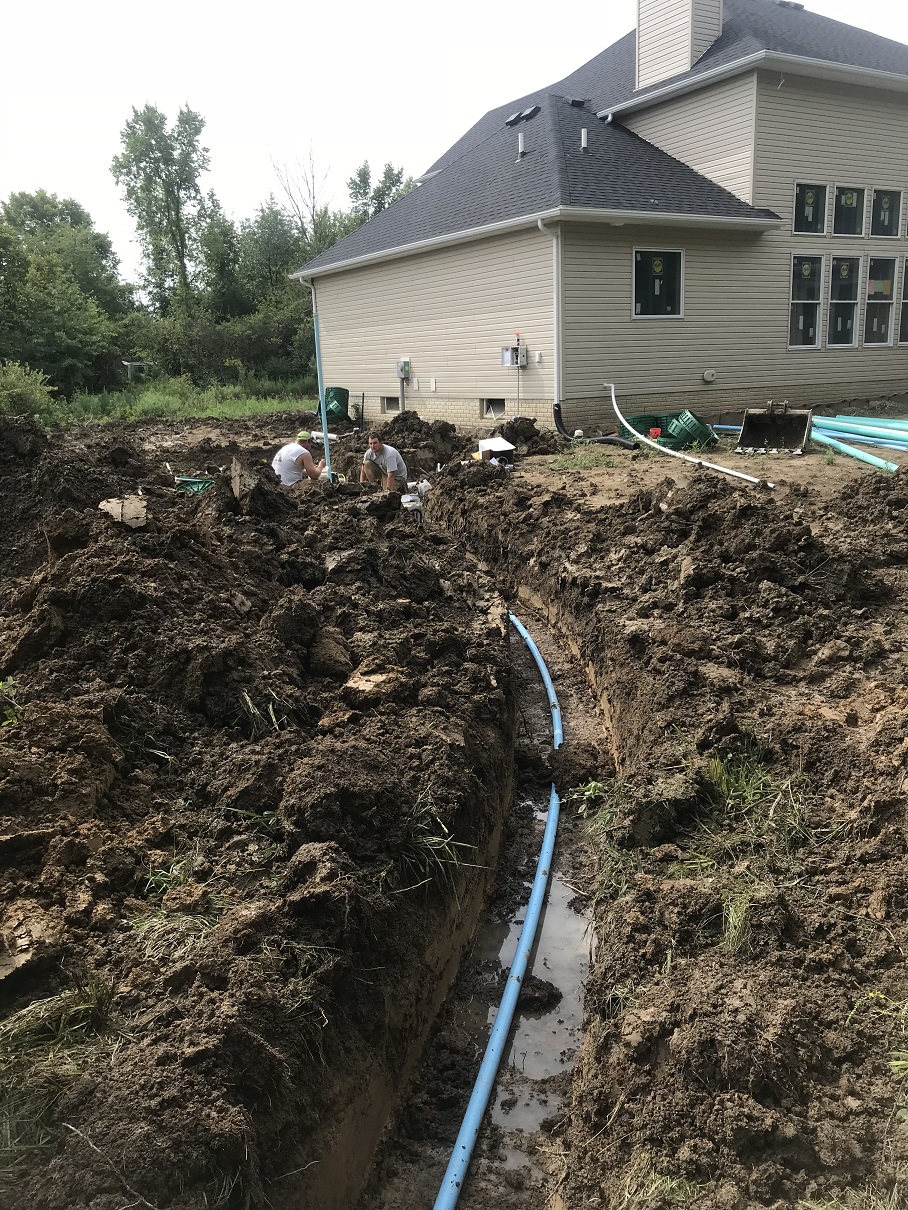 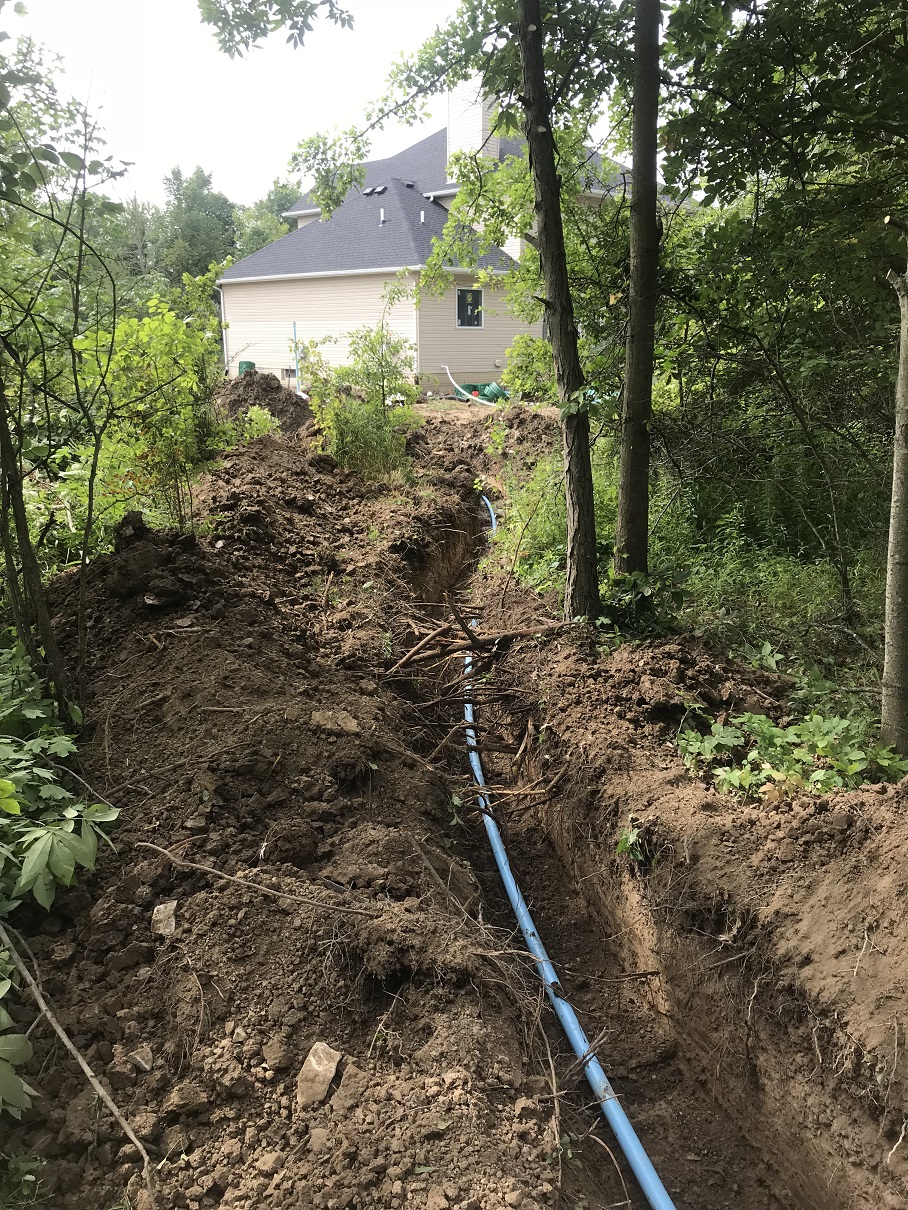 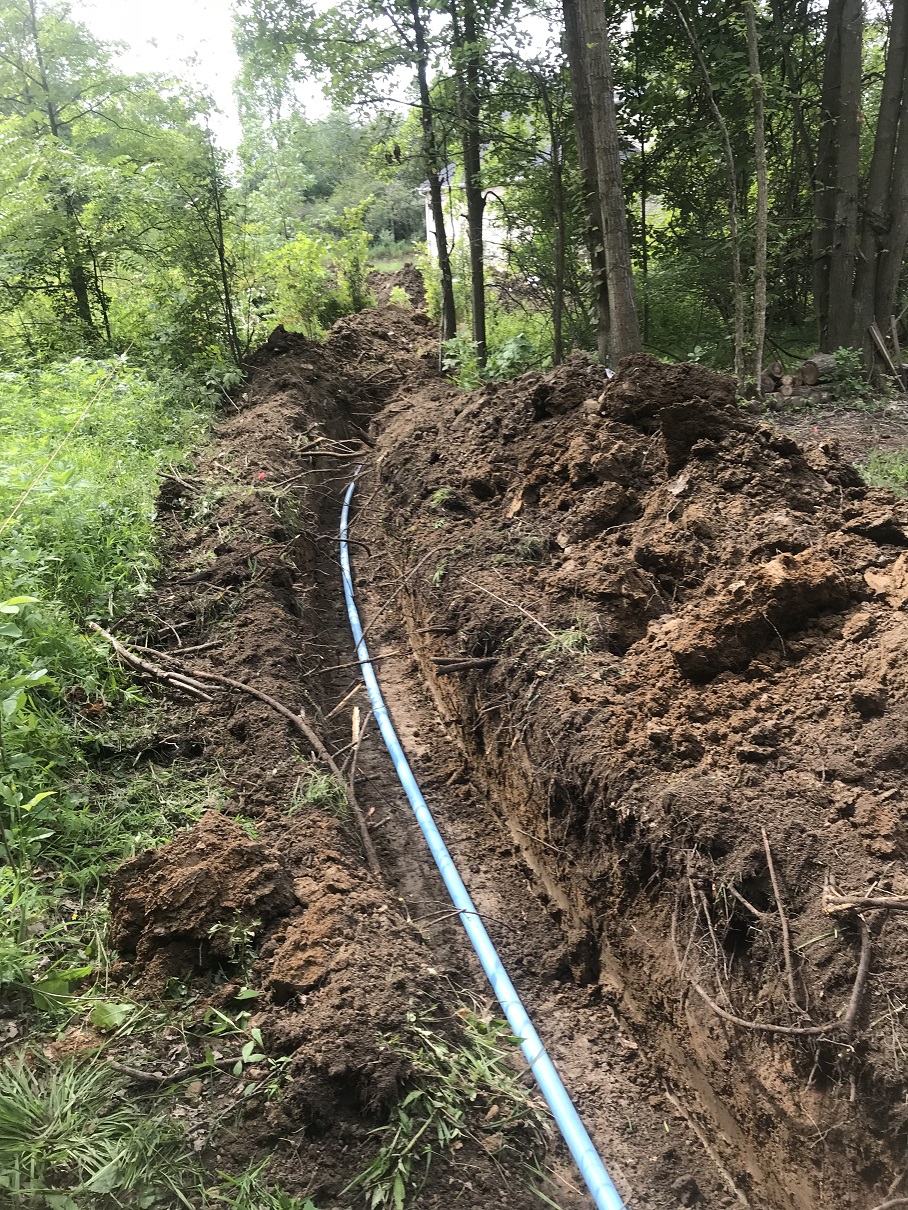 Here are some pictures we took of the after:

This is the exit pipe for the “curtain”.  This is the water flow we will be trying to direct.

As I said, while he was there he did some regrading.  We were originally short on dirt for the back of the house, but he was able to take some of the dirt from the septic dig to fill in in the back so now you can see the difference.

Before, you will notice that you see a lot of the water proofing on the basement walls:

He also buried all the piping for our downspouts.  Had we known he was going to get to it this quick, we probably wouldn’t have bought the temporary tubing that our Field Manager told us we needed to go ahead and put on.  I don’t think any of us thought he would do it at the same time as the septic.  Now I have about $40 worth of piping we used for a whole 2 days. ?‍♀️

Here’s a photo of the new grading in the front.  Sooo nice:

As you can see from the grading pictures above and this one, all the pipes now go directly into the ground where they are hooked together and come out in the same place we are funneling all of the water in the lower spot in the front yard.

So at this point our contractor thinks he will be out one last time.  We will be having him bury our propane tank, he will be bringing another load of gravel for our driveway….smaller stones that are better for our vehicles long term, and doing some final grading work.

This was also drywall day 4 and they got the last of the big pieces up and did some detail work.  At this point I think they are ready to move on to mudding, taping, skim coats, etc.

This half wall will get covered in stone to match the stone fireplace.  All the stone is the same as the stone on the front of the house.

One of the attic accesses:

So after not much getting done last week, A LOT got done this week.  It’s really coming together!  We’re so excited to see the drywall finished and then move on to see all of our choices on the inside really come together like the choices we chose on the outside did.  You look at these products, little samples really, and hope it will all go together like it does in your head but you never really know until you can see it at full scale.