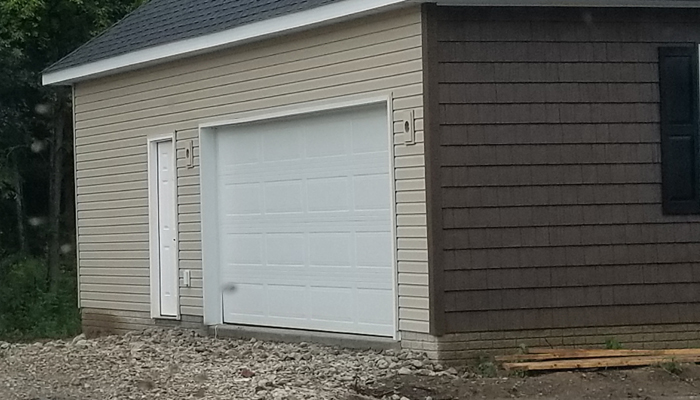 So today we installed the garage insulation ourselves!  As I said in an earlier post, Wayne Homes installs insulation only in the common walls of the garage and drywalls the whole garage.  The garage at our old house was so freezing anytime we had to go into it in the winter because the exterior walls were not insulated, so we wanted to tackle this project ourselves in the new house.

There were several bumps to this story though.  I had ordered everything to be picked up at Home Depot closest to our new home but I couldn’t find any dimensions on the size of the packages.  I was worried about being able to fit everything in our SUV.  Well sure enough, there was no way we could fit all 6 packages of insulation we needed, plus ladders, plus chairs and other random things we need or keep in our car for when we work out there.  So we picked up as much as we could and planned to make 2 trips. Richard dropped me and Creative Kid off and helped unload the car and then headed back to Home Depot to pick up the rest of our order.

The first thing we noticed pulling up was that the garage door had been installed.

I decided to start out by finishing a project we began the other day which was to run HDMI cables from where the TV will be installed over the fireplace to where the peripherals will be held to the right of the fireplace.  We bought 15 foot, heavy duty cables off Amazon for this purpose and they were pretty much perfect for what we needed to do.  We bought other clips and started the project on Wednesday only to realize those clips were not working really well, so we decided to find alternatives.  We found easier to install clips on Amazon and had them sent to the main Amazon locker in Columbus because we knew we could get them in about 24 hours or so.

The new clips worked very easily and I got the 4 cables all in place fairly quickly.  They’re not pretty, but they will do.

Before I move on in the telling of today’s adventure, here are some pictures of the insulation Wayne Homes installed a the end of the week.  They are supposed to start drywall this next week, which is why it was imperative that we do the garage insulation this weekend. We knew they had at a minimum started the insulation Thursday or Friday but we got a nice surprise when we noticed that we got R 21 insulation instead of R19 as included when we upgraded our exterior walls to 2 x 6 framing.  Our Field Manager told us it was a free upgrade because they were out of R19.  Lucky us!

One of the first things I noticed when I looked up was this flashing type stuff up in the eaves.  Richard looked it up and it seems they are attic baffles that help prevent ice damming on the roof and help keep your house cool in the summer and warm in the winter by adding attic ventilation.

So back to our little adventure today.  Our exhausting adventure today.  After I finished the HDMI, I headed out to the garage and started opening up insulation.  We bought batts instead of roles because we thought they would be quicker to work with even though we knew we would have to add pieces to the bottom because our walls in the garage are close to 10 feet because we raised our first floor to have 9′ ceilings.  I opened one package and set all the batts on one side of the garage and then opened another and sat down to start working on the area under the window.  I don’t like ladders so it seemed like a good place for me to get some work done by myself.

At this point Richard was already on his way back to the house and I just wanted to get started on my own instead of wasting more time because we had to make two trips.  Well, I measured and cut the first piece, go to put it in and immediately noticed that we got the wrong R value for the garage walls!  As I said earlier, we had upgraded the exterior of the house to 2 x 6 walls and just assumed they were all 2 x 6.  When we talked to our Field Manager on Wednesday about our insulation project he even said we should get R 19 batting because everyone was thinking about the house walls that were upgraded.  BUT the external garage walls were still 2 x 4s!

Oy Vey!  So Richard pulls in a few minutes later and I tell him we have a problem and explain the issue.  Technically we are only hurting ourselves by putting in R 19 because when you compress it in the smaller framing you will not get R 19 value.  You pay more for the R 19 so we lost a bit of money and I was willing to eat that money across all of the batts just so we could get started, but told Richard to message our FM anyway and let him know the issue.  He said it would be harder to install the drywall because the batts will stick out further than they should.

I could see that slightly, although it didn’t look any more protruding than the professionally installed insulation, but just to be safe I sent Richard back with 4 still in plastic batts and one batt pack that was opened but not used yet.  Since I cut the one piece from one pack I knew I would be unable to return it and decided to use that pack to fill in as much as possible to use it up.  I figured one package worth (8- 15x 93″ batts) couldn’t cause too much of a problem as long as I installed them well inside the walls.

So I then spent time ordering the new batts we needed so that when Richard got back to Home Depot he could exchange the old ones and pick up the new ones fairly quickly.  He took everything possible out of the car so he could get all 5 batts in the car in one trip.  All of this ate up about 2 hours of time.  I had hoped to have half of it done before lunch, but all we got done before lunch was the pieces I did under the window. *sigh*

The installation went rather well, although I could tell we were getting tired and less efficient as the day went on.  The mix up at the beginning of the day really set us back and between our own tiredness and a 6 year old who was bored to tears half the time, it was a really long afternoon.  We finally got done around 6pm, but then we had clean up to do and couple other things before we left.  Also we had a pretty heavy downpour near the end of the installation which made us have to close the door in the garage and made the end of it pretty warm without the breeze.  I won’t complain about that too much though because the temperatures were great for having to do manual labor.

In the end here are some before and after shots.  As you can see I took the before pictures before we noticed our R19 blunder.

Overall I think we did a really good job for never having installed insulation before!  It’s not perfect, but it’s pretty darn good in my opinion and should allow us to use the garage a little better during the winter months especially.  Richard will have a workshop in the one corner and with the use of a small space heater, he should be able to get 4 seasons use out of it!

Well that’s one more thing off the list and one more crazy adventure.  Next week not only will drywall start, but they will be putting stone on the front 2 pillars of the house and our electric company will be out to run the lines from the temporary electric pole to the house for permanent electric!  Yay!  We would have had septic installation being done next week as well but we hit a snag as 4 more trees need to be removed as well as some additional stumps.  That was unexpected and partially due to something the county added as a requirement to our septic contractor’s proposal.  Still, there should be some great updates next week!  Until then…