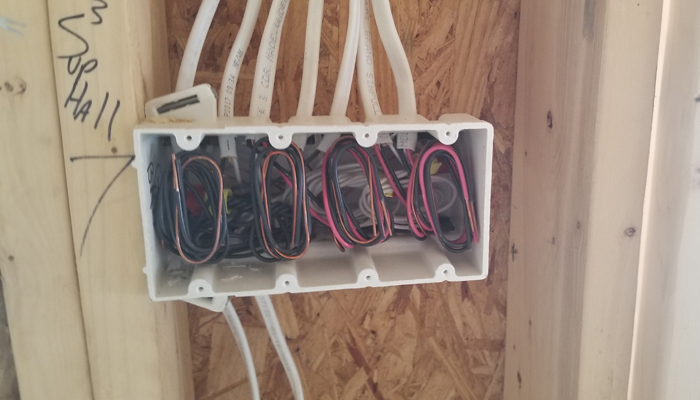 We went to do a few things at the house over the weekend and get the videos off of the camera.  We need to start putting up more videos but I need to find a program that is fairly easy to stitch the days together and edit them down so they aren’t super long with periods of dead spots in them.  It’s a lot of footage.

It seems from the video that rough electrical was finished up on Thursday, which would have been day 5.  When we got in the house it was all cleaned up and everything is just waiting for the inspection.  We thought that the inspection would have been done at the end of the week, but the permit does not show it signed off on yet.

I won’t bore you with tons of pictures of electrical wires, but will highlight a few things that are finished off.

First we headed to the basement to check on the dehumidifier and it seems it’s running like a champ.

The panel is closed up and a few of circuit breakers installed, but there is a lot more left to do in the future.

Our county requires a passive radon system put in.  This basically goes ahead and puts the pipes into the wall, so you don’t have to have them added later if you want a radon system, but you still have to pay for a radon remediation company to come out and fully hook it up.  I honestly don’t know if I am going to bother with it or not.  We had to do it on the house we sold because the buyers requested it after the inspection test, but the more I read about it the more I’m not certain if it’s a real issue for the vast majority of homes.  It feels a bit like a rip off that is preying on fear, but I digress.  I also have issues with the fact that they seal your sump pump lid if you have it hooked up.  What exactly is going to happen if your sump pump fails in the middle of a hard rain (as it always does).  How hard will it be for you to change out the sump pump yourself?  CAN YOU even change it out yourself?  More reasons I am skeptical.

This is the home of the future bathroom.  What you see in the bottom right is the ejector pump that you must have for a basement bathroom.  We paid for the plumbing rough in for this future bathroom even though we don’t plan to do it for quite a while, because it’s cheaper to do it now than to tear up the concrete to do a bathroom later.

When I first talk to the plumber I believe he said I would get 7 basic lights in the basement.  Well he was definitely off, because we got 12!  Our old house was kind of dark until we added some track lighting, but I’m pretty sure this will be a lot brighter even though the square footage is a lot bigger.  Our basement will only be used for a little bit of storage and a freezer until we get to the point of finishing part of it, but it will still be nice to go down there and be able to see well.

I failed to take a picture, but the electrician also offered to add a basic pull chain light in the main attic area because I didn’t realize one wouldn’t be added by default.

All the cables have been nicely bundled up for our networking area and the ethernet throughout the house have mud rings installed for them to be pulled through.  You will also notice there is a pipe coming up from the basement.  This is to run any future lines that we need into the networking closet.

We paid to have this conduit run from the basement all the way to the attic and since we have the hip roof, getting the pipe from the basement into the main part of the attic was not some simple task.  It had to go through several bends to get to it’s final destination.  See if you can follow it from the pics starting at the 1st floor.

And a couple photos of the rough in for the switches.  All the wires are stripped and neatly tucked in the box.

Well that was the end of the rough electric.  The work we went to do, I will put up as another post later, but things are continuing to move along.  Some more exciting things happened today that I will be sure to try to add tomorrow!  Until then…