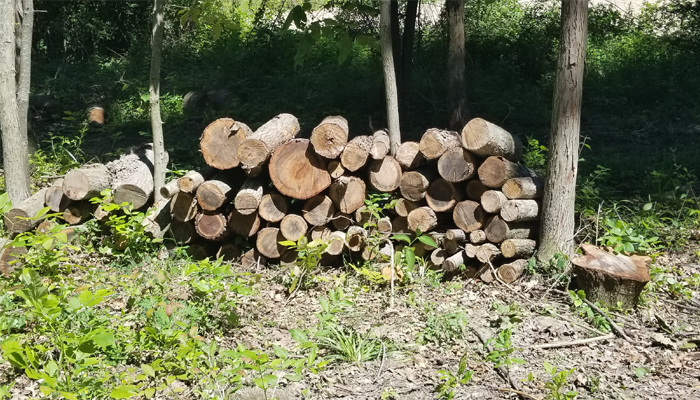 So the day finally got here when we had good weather to move the logs that were left on the septic area after the land was cleared.  We asked the company to cut much of the tree trunks into logs and leave them so we could use them for future projects, for camp fires, etc.

We had wanted to move them a long time ago, but the weather has either been super hot or super wet and that part of the land really holds the water in spots which makes it hard to get back there let alone work in it. Technically this is day 2 of our log work, but we only stayed for about an hour the first day we tried moving them because it was way too hot to continue.  The weekend was excellent weather though and it had been dry for several days so we planned to spend the whole day out there moving the logs.  We packed a cooler, chairs and plenty of water and headed out to the land.

Moving the logs went pretty well once we got set up.  Compared to how I felt earlier in the week when it was so hot and we only stayed for an hour, this time was so much easier. It’s amazing how your body reacts differently with a 15 degree difference.  The heat was definitely playing a huge factor in our progress that day, which was basically non-existent.  That day I was pretty certain we were going to have to hire someone to come do it, but we waited to see how we felt under better circumstances and I am glad we waited.

We probably had 15 or so piles of wood of various amounts when we started out.  By the time we ended for the day (around 4pm) we whittled that down to about 3-4 piles.  We would have had it all done, but we kept running into critters that took a while to shoo off.  Namely snakes, which neither I nor my husband likes.  This added time we would have spent moving logs.

In total we saw about 5-6 garter snakes, with the largest being about 2  and a 1/2 foot long.  We saw some babies that we thought might be moles, that were only about an inch long and didn’t have their eyes open yet, but after we saw a field mouse in one of the piles, we thought they were probably field mice.  They were gone by the end of the day when we went back to look at them so we don’t know if snakes got them of if the momma came back and moved them. Creative Kid would like to think the momma came and got that and that he’ll see them again.  He can be such a sensitive soul.

We saw butterflies, dragonflies, slugs, earthworms, lots and lots of frogs and various birds.  We even saw deer tracks and other animal tracks in the mud in a couple of places.  All of these things provided opportunities to educate Creative Kid on various animals and the ecosystem.  We also talked about God and the fall of man and why snakes slither.  One of the things I love about homeschool is that it is not set between the hours of 9am and 12am when we do our book work.  Homeschool is all around us, wherever we go.  I can’t wait to see all the opportunities that await us living out in the country where there will be plenty more spontaneous homeschool lessons.

For lunch we had a little picnic in the house while we looked up pictures online of baby moles and mice. 😀  It was an interesting ‘first meal’.

Here’s some photos to show some of the task we had and some of the progress made.  It was a lot of work and we only had a few piles left after this day, but after we had stayed for 7 hours, we were ready to go home. We basically piled up or stacked up all of the logs between trees or at least past the tree line to be out of the way of the excavator and his equipment.

This pile used to be twice the size.  This was the only pile we really got anything done on earlier in the week, but in the overall scheme of things it wasn’t much.

The weeds and small saplings are worse on one side than the other and the overgrowth disguised that there were plenty of small wood piles mixed into all that greenery.

After we left we looked at the forecast and determined we probably had about 2 hours left to do at most and that we would complete the work the following week in the evening sometime before the weather got too hot again.  While I would have liked to have finished it on Sunday, our bodies needed a break and I didn’t think taking up our whole weekend as a family to do work on the land was fair to Creative Kid, especially since he was really good during our 7 hours there.

Tomorrow I will try to show you the end results that we finished up this evening and give an updated look at the wiring going on in the house.  If all goes well tomorrow, we should be able to have the inspection on the wiring done by the end of the week.