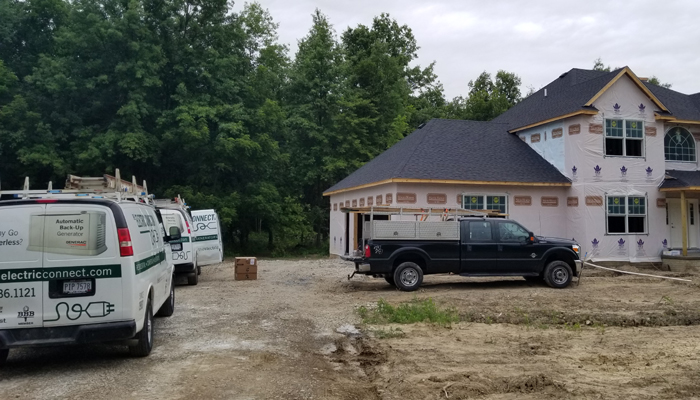 Before I get into all that, let me show you a sample of the awesome concrete work that was done on Thursday (day 68).

I will have to get some additional pictures of the basement and the front porch area this week.  I failed to get them that day because by the time we went through 2 hours of discussion with the electrician, I had forgotten about the concrete.

Before we got there, Richard had texted with the electrician who set up the walkthrough to ask if they would run ethernet for us.  We had planned to run it ourselves but honestly it would have been a lot of work for us and we’d rather have it done by a professional so we know it’s compliant with code.   We were told they would do it for $20 an opening and that would include staples and protection plates…we just had to supply the wire.  Awesome.  We had 13 openings, so $260 sounded reasonable.

When we got there, we dealt with a different electrician who said he would honor whatever the first guy told us but he interpreted what was told us different.  We still only paid $260 but that was because we reduced how many lines we were running because he said it would be $20 per line, not per opening, so we took out some of our redundancy.  We had put redundancy in several areas in case a line went bad long term…areas that it was most important to have the ethernet.  Instead we added a pipe system from where our ethernet hub will be, to the basement and then from the basement to the attic in case we ever need to add a new line.  This cost $150, but then if we ever have an issue with a line going bad or need to run other electrical lines for new lights or wall plugs, this will not require tearing out drywall.

We brought the ethernet with us to give them and the electrician was certain we would need more cable.  Richard did a good job estimating what we needed and thought 1,000 foot would be fine, but the electrician though that was not going to be enough to run the 13 lines, let alone the extra lines we plan to drop into the basement for the future.  We didn’t see how it would take that much, so in the end we decided to wait to see how things went before we ordered more.  The electrician said he would run our wire on Monday and let us know how it went so we could order more and get it there in time if need.  Monday evening he told us there was plenty of wire left.  I don’t know how he overestimated so badly, but considering all weekend we were going back and forth about going ahead and buying more, I am glad we held off.

Other major things we added include under cabinet lighting, a couple outside flood lights, additional outside outlets, additional overhead lighting, a freezer circuit, a shop circuit, wiring the well, lots of additional outlets,  and a few floor outlets.  Some of those were very pricey.  The undercabinet lighting wiring and switch alone is going to cost us close to $300 and we have to provide the fixtures.  Other items weren’t very pricey by themselves, but the number of them added up.  Extra outlets were only $25-$30 a piece depending on the type…but we added almost $300 worth of outlets.  Floor outlets were $100 each and we added 3 of those.

One thing I didn’t include above that we added was a bigger circuit panel.  We plan to eventually finish part, if not all, of our basement.  We also plan to add a pool and possibly a hot tub.  All of these future things will need electricity and separate circuits.  By the time we added a freezer circuit in the basement and a shop circuit in the garage, there was going to be less than a hand full of circuits free for future expansion.  Rather than have to pay the cost to get a bigger panel later, we upgraded from a 42 circuit panel to a 60 circuit panel for another $175.

In the end we spent a whopping $2,345 with the electrician!  This was definitely over my planned budget, even if you take out the ethernet charge.  Honestly I had a few other things I would have liked to do, but I didn’t want to go any further over budget.

The guy we had was somewhat knowledgeable and help us work through a couple things that were not necessary to spend money on, but his knowledge of ethernet and combo plates were lacking and in the end we will have more wall plates that I would have liked.  At this point I am kind of at the ‘it is what it is’ stage about things like this.  We did find some combo plates that Richard showed him for our HDMI/Ethernet/COAX connections in the livingroom that he agreed should work so at least that will reduce some of the wall clutter.

Here are some pics from day one of the electrical.

Can light above the shower.

Exhaust fan in the master bath.

The 2 ceiling fans in the vaulted rooms will be done with peak junction boxes.  This will allow them to sit parallel to the floor and not require a sloped ceiling kit.

An example of some of the boxes being put up.  This is an electrical box on one side and the other box is for ethernet.  Ideally these two would be combined in one box for one combo wall plate, but they are not because they don’t have those available and the guy seemed reluctant to do it.

This is an island with cabinets under the countertop.  There is 3 outlet locations above the countertop which will be good for gatherings when multiple crockpots or other heated serving dishes are used.

This right here is going to be the bane of my existence.  The location of the switches when you come in from the garage, which we will be doing most of the time, is not ideal because of my pocket doors.  As you can see the box barely fit in the framing here and they may even have to shave the wall plate down once the drywall is on making the space even smaller.  The door unfortunately swings right by this area, so it’s really awkward and you may have to feel around in the dark after you have taken a couple of steps to find it. To solve this issue I think I will be looking to install a motion detection on the light in order to make things easier when coming in at night.

I won’t bore you with tons of redundant pictures, but it definitely took longer than expected and will cost more than planned.  This is all money coming out of our pocket, not coming out of the loan. This is also true for the 3 ceiling fans, 2 chandeliers, undercabinet lighting, flood lights and alternative garage lighting that I am now in the process of buying so we will have it all here by electrical finishing in about a month or so. As the person who does the finances in our household, I’m doing a lot of creative financing until we sell stock and Richard gets his annual bonus. ?

We had planned to work out on the logs after the walkthrough, but it was lunch time by the time we were done and once we came back from lunch we had a couple things to clear up with the electrician before they left.  By that point it was mid-afternoon and so all we got done was some weed spraying near the trail camera.  We decided rather than only work for an hour and quit, like we had to a couple days earlier, that instead we would come out on Saturday to work.