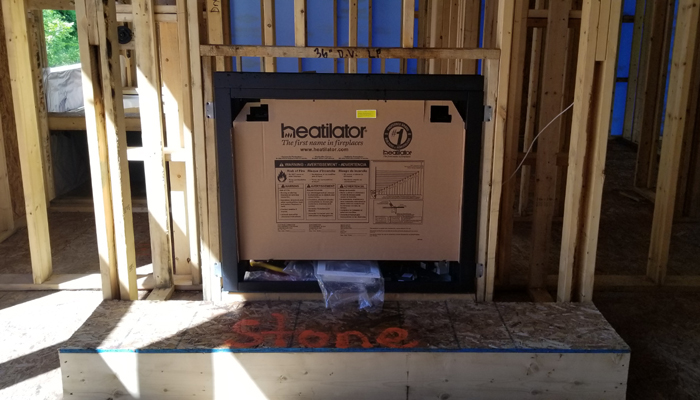 We stopped by the build last night before taking Creative Kid to Taekwondo.  I think getting him involved in Taekwondo will be great for him, but let me tell you the schedule we are keeping right now between his activities and having to drive a half an hour each way to the build site several times a week is a bit crazy!

We can go up to 3 times a week to Taekwondo, but most weeks are lucky to get there twice.  Then we go about 3 times a week to the land and up until a few weeks ago, Richard was also going routinely to physical therapy for something he has done to his knee while we were working out on the land.  That doesn’t take into consideration normal errands we have to do, constant research and window shopping we are doing for things for the house (closet systems, mirrors-as I wanted framed mirrors so we rejected the builder grade mirrors, various new furniture we will need, etc), as well as trying to fit in normally family time for Creative Kid and holiday/birthday celebrations.  Oh and I’m still homeschooling straight through.

Richard and I had decided on how we wanted to structure our school years well before we put the old house on the market and while I make allowances when necessary, I am trying to stick to our plan as much as possible. Least to say, I can’t wait until fall when we are past all this craziness and try to find a new normal.

In the end the trip to the build site was a bit uneventful.  The only major change was that our direct vent fireplace was put in place.

It also appeared that our Field Manager was there and wrote out his punch list for the framers that are supposed to come back and fix a few things.  Some of the items we found right away thanks to his spray paint notations, others not so much.

He also made some additional markings around the house.  Things like where the LVP flooring will end and the carpet begins (the doorway of our master suite), labeling the pot filler (a splurge for me! Yay!) and the dryer vent hole, etc.

I also grabbed a couple photos of some notations on the 2 doors in the garage.  One is for the service door and the other door is for the door into the house from the garage.  The patio door has been in for a while too, so I think the only other external door needed is the actual garage door.

We also noticed the power cable to the front sump pump is now strung through the front door. ?

I also took a picture of the back sump pump exit.  We are trying to figure out what we are going to do about the down spout discharge exits.  Anything that is outside of the 4 walls of the house is our responsibility to complete.  This includes putting in the temporary and then later permanent piping to take the water away from the house from the bottom of the downspouts, i.e. the downspout discharge lines.

In the front, it is pretty obvious that we will trench the pipes to the creek bed that we have now in the front that the excavator made to funnel water away from the driveway as it’s the perfect solution.  However, the back area is a little less clear since the area this sump pump hose is emptying into right now is the future site of a pool, yet that is the natural flow of the land right now after the house was built up.  We need to figure out which ways we are going to channel water to keep it away from the house and take into consideration future projects because I don’t want to have to redo the line when we put in a deck or a pool.

This morning, our FM called to let us know the status of the project this week.  The windows were supposed to be put in today, so we plan to go back out there tonight to see how it looks.  The doors would also hopefully be put in today or early next week and as soon as all the doors are in, we will finally be weather proof for now.

The extra wood and foam that is sitting in the garage should be removed soon and they will have to spread the extra gravel left in the garage before the pre-slab foundation inspection that must be completed before they can pour the concrete for the basement and garage.  I think at this point that’s looking like next week hopefully.  A new dumpster was dropped off since the first one was full, however they put it right in the middle of the end of the driveway instead of off to the side where the old one was, so now they are supposed to come back and move it because it is in the way.

As of now, our walkthrough with the electrician will be next Friday and should take 3 days (Friday, Monday and Tuesday) to complete.  I am uncertain just how much other stuff will get done next week before then, especially with the holiday in the middle of the week, but I would think the punch list items for the framers will probably have to be done before wiring gets routed in case the wires have to go through some of those areas.  We are planning to take the whole day off next Friday to do the walkthrough and start doing some of our own work out there as well.  We still need to move logs and we will probably be stringing our own ethernet cabling throughout the house. Hopefully the weather will cooperate and we’ll be able to get a lot done.

I believe the window delay plus the electrician not being able to schedule us right after that delay will lead to an over all delay of about 3 weeks from what we were originally hoping for, but still withing our completion date guarantee.  At this point we are just hoping for a finish date not too close to the end of September so we’re not rushing to get moved and get everything cleaned up at our apartment before the end of the month.  I don’t want to have to pay rent/mortgage for the same month.