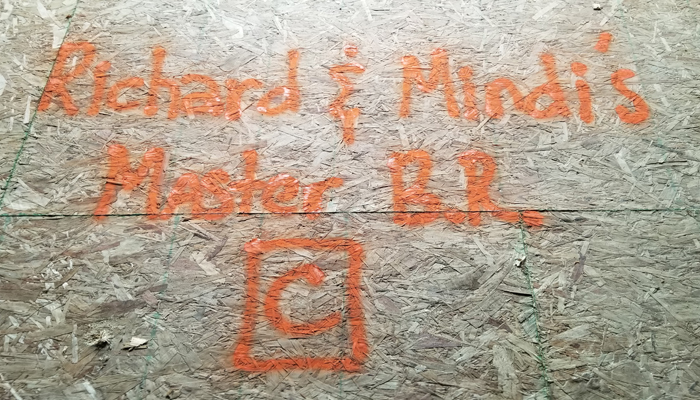 Today we had two important meetings about the house.  The first was a walk through with our Field Manager now that framing is done.  Our FM is coming off some time off he had scheduled and is still coming up to speed with everything (I believe they can have a dozen builds going on at once).

I could tell he was a bit unnerved about that and the setbacks we’ve had.  The windows are now not going to come in until next Thursday and because of that we can’t do electric next week.  The electrician would then like to push us back 2 weeks instead of the 1 for the benefit of his schedule…I don’t know who is going to win out on that one.

Nonetheless, we pulled up to see the roof had been completed and that was a welcomed sight.  The shingles look so nice!  I can’t wait to see the outside all put together with the black shingles, the black shutters and the black front door.

Plumbing and HVAC rough ins have started so we were there while the contractors were working.

We also noticed that they put some wood pieces across the open windows of the 2nd floor rooms for safety.

A close up of the house wrap.  We didn’t have that up until recently and our FM said Union County is the worst county that he works in for the permitting process and wants to inspect every little thing, that’s why it couldn’t be put on earlier.  We have noticed the issues with Union County from the beginning.  I love the land, but man if I had known how they are when we bought the land I might have paused to think it over.  We left an HOA because we don’t want to be told what we can do with our own land and I don’t want to have that feeling anymore.  Not that inspections in general are a bad thing, they’re not…but I worry about our future projects and how ticky tacky they will be.  Our interactions with the zoning inspector doesn’t exactly leave me feeling all warm and fuzzy.

We had a conversation with the plumber before our FM arrived about moving our front hose bib slightly.  It was originally positioned on one of the stone towers in the front, but I have seen a lot of stone get stained and look ugly over time from hose connections leaking and such, so we’re having it relocated right around the side of the tower to where the siding will be.

The plumber also discussed moving our ejector pump for the basement bathroom rough in we paid extra for (a future project for us) from where the building plans had located it.  It would be more cost effective and work better to have it located closer to where our future basement bathroom will be, which was on the other side of the basement.  His initial proposal was to put it where we hope to have a media/movie room in the future, so that wouldn’t work, but eventually we realized the bathroom area is big enough to locate it in that room and we will just have to build a closet around it when the time comes to make that room.

Sitting in the garage we noticed some new arrivals that were being installed.

One thing we noticed when we first went into the house is that we have some new signage.

I also noticed immediately that we have another safety rail on the stairs.  This makes me feel better about allowing Creative Kid to go upstairs.  Here’s a picture that shows the wall under the stairs that I forgot to take last time we were there as well.

I also spied through the studs the master bath soaker tub sitting in our bedroom. The amount of grime these things get in the warehouse is horrible.  I’m glad I am not the one who has to clean that up. ?

When our Field Manager got there he took Richard downstairs to look and discuss the issue with the ejector pump.  Creative Kid and I didn’t go down there as there is some puddles of water in the basement and I didn’t bring my boots.  There was also a discussion about where to put the septic connection because the foundation people failed to cut the hole and were going to have to come back out to do it and in the end it sounded like the consensus was it was better to move it from it’s original spot anyway, so maybe that was a good thing?  On the way down to the basement though, more signage. ?

Our FM told Richard that he hoped to finish the concrete next week.  To my knowledge that would consist of the basement, the garage and the front porch stoop.  I can’t think of any other concrete that needs to be poured.

Like I mentioned above, the plumbers/HVAC workers were there and you can see some of the plumbing and HVAC that was being installed.  Ducts were being run, toilet connections and pipes were being installed, floor vent holes were being cut out, wall returns vents openings were being put in, etc.  Lots of hole saws and reciprocating saws were going strong as we walked through the house. 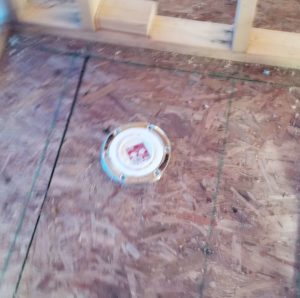 The only other thing we discussed with the FM really was our master closet.  We are wanting to install a nice closet system and ditch any sort of dressers or armoires.  We currently have a double wide dresser and an armoire for housing folded clothes and they take up so much room in our master bedroom.  We now have a nice sized walk in closet that we think will accommodate all of our clothes, including fold up clothes.  We needed to find out if we could put one in before we get the keys (some builders will allow this) as it can make a difference in the carpet installation as I plan to put one in that is freestanding and not hung on the wall.  He would like us to do it after simply because of liability. They would not want to be liable if a worker accidentally breaks something, which I understand.

We then left to grab an early lunch, while our FM was going to do some work spray painting out the layout and doing a thorough inspection of the framing and making a punch list for the framers.  We had not gone over the framing to that level of detail yet, so we were happy to see how detailed and conscientious he was about the quality of the job.

After grabbing lunch, we headed back because we had to have the 2nd important meeting of the day, which was to meet the well contractor.  We’ve contracted Bapst Water Well Drilling and met Chris Selbe at the job site.  He had put a wooden stake in where he thought the well should go.  It’s not in the best of places or the worst of places, but I think I can live with it.  I want to go back out when the ground is dry and there aren’t trucks everywhere to take some measurements and make sure it won’t be too close to a future sidewalk that will go to our front door.  We plan to plant bushes or foliage plants around it to help disguise it.

We also talked about a water softener, but I need to do more research on what he offers versus other options.  I know I don’t want to be paying a service and want to be able to maintain it ourselves.  He said the water seems to be pretty good in the area except for sometimes it has a high iron content.  We’re coming from Lancaster who has a high calcium content causing fixture issues, so this is just par for the course in my mind.  I can deal with just about anything except high sulfur content.  Until you have taken baths in water that smells like rotten eggs…repeatedly…you really can’t complain about the water.

Overall this meeting took less than 15 minutes and was just to verify placement and talk time frame.  Our FM said we should schedule it for about a month from now, but Chris seemed to think they would get to it in a couple of weeks.  I have no problem with doing it early as we won’t know the final cost until we see how deep we have to drill and I am all about getting the unknowns out of the way.  Stressing about the unknown is worse than just knowing…you know? ?

We went back into the house to see what all was done while we were gone to lunch and our FM had been very busy…you could smell the spray paint the moment you got into the garage!  The plumbers had gotten a lot more work done, too.

Sunroom, which now sports a caution sign so people don’t forget to look down if you go out through the back door opening.  It’s a long way down. The LV is for our Luxury Vinyl Plank that is going down throughout the downstairs except our bedroom and closet.  I have no idea about the asterisk.

The pocket door that was originally missing in the framing.

The top of the stairs:

Loft.  The upstairs all gets carpet:

And here are a couple of the notes our FM has left for the framers.  He says he has about an hour’s worth of work still left to do in the house, but he had to leave by a certain time today and I think he wanted to come back when there was no one there working.  He seems to be a bit of an introvert and is very detailed and my guess is he would feel better working through the rest of his inspection without distraction.

Lastly our FM told us that he would like to have the septic done during the 3rd week of July; however, we have contacted our contractor and he thought he was solidly booked up for July on a couple of large commercial projects.  He said he would try penciling us in and see what happens.  Hopefully it will all work out, but if not I am confident that our FM will try to rearrange the schedule so that we don’t have massive amounts of down time and instead will get other things done so we can still hit our timeline goals.

We may go back tomorrow evening to see the progress on the plumbing/HVAC and get a really good look at everything.  We would have stayed longer, but Richard only took a half day off of work and honestly I don’t want to be in the worker’s way.  I also have a little personal project I want to do out there (which I will share when it gets done) when there’s no one else there, so if the weather isn’t horrible we might spend a hour or two out there tomorrow night.  ?