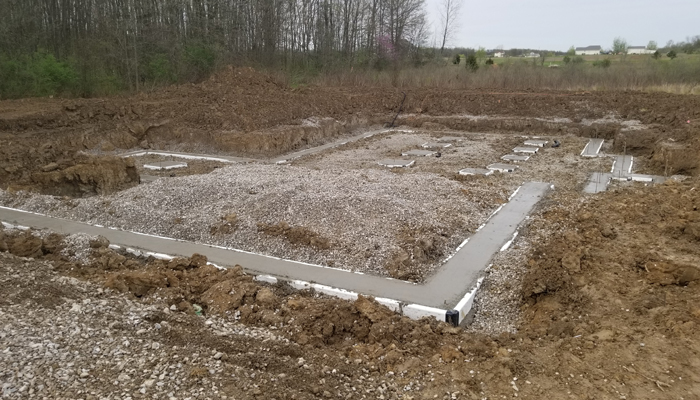 We went out to the land today in late afternoon expecting to find the footers poured.  We figured they would have been poured this morning if everything got done yesterday with the forms.  We found out later from the camera that gravel was added yesterday, but no other work on the forms were done.  I’m sure this is why our Field Manager seemed to be a bit irritated yesterday when he called to let us know that it was going to be another day.

As we were getting close to Marysville, we had a pretty decent storm happen and we figured we’d end up sitting in the car until it cleared before we investigated the finished footers.  However, as we got closer to the land we noticed a big slinger type truck in front of us and after we could look down the road and see our driveway we noticed not one, but two concrete trucks parked by the side of the road and sure enough the slinger truck pulled into our construction drive.

We swung back around a few minutes later and took a peek as they were getting the one truck plus one of the concrete trucks into position.  It was still pouring down rain at this point and rather than be in the way we decided to leave and go do an errand and get some dinner before heading back out to the land.  This would give them time to finish their work and for the rain to stop.

We got back about 1 1/2 to 2 hours later and found that the footers had been poured, although part of it looks kind of odd to us.  The forms in the middle are a bit wonky, but I guess that doesn’t matter as far as stability, but also one of them were not poured.  We don’t know if they ran out of concrete or what happened.  I’m sure it will get poured later, but it seemed a bit odd that just one was not poured. 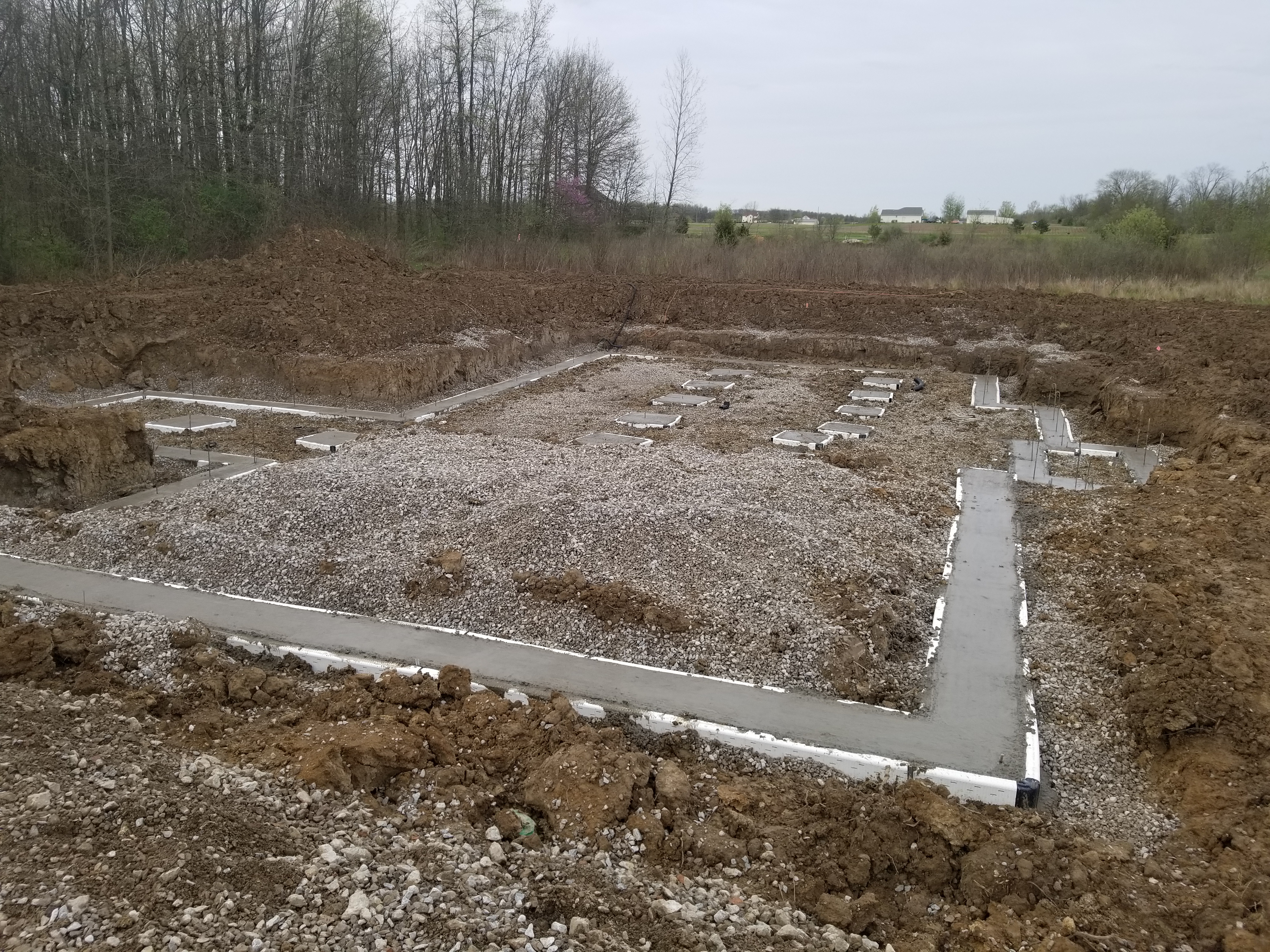 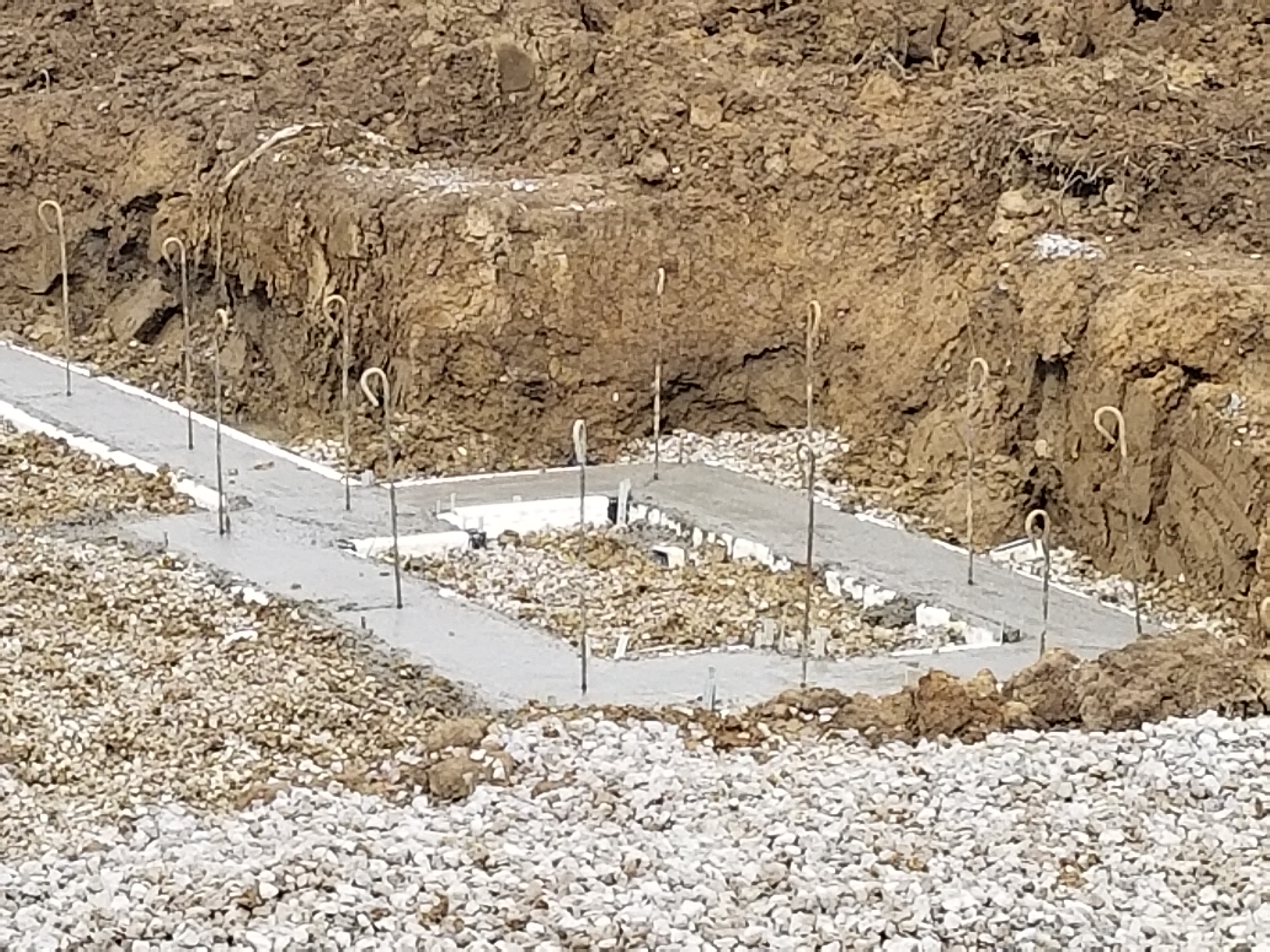 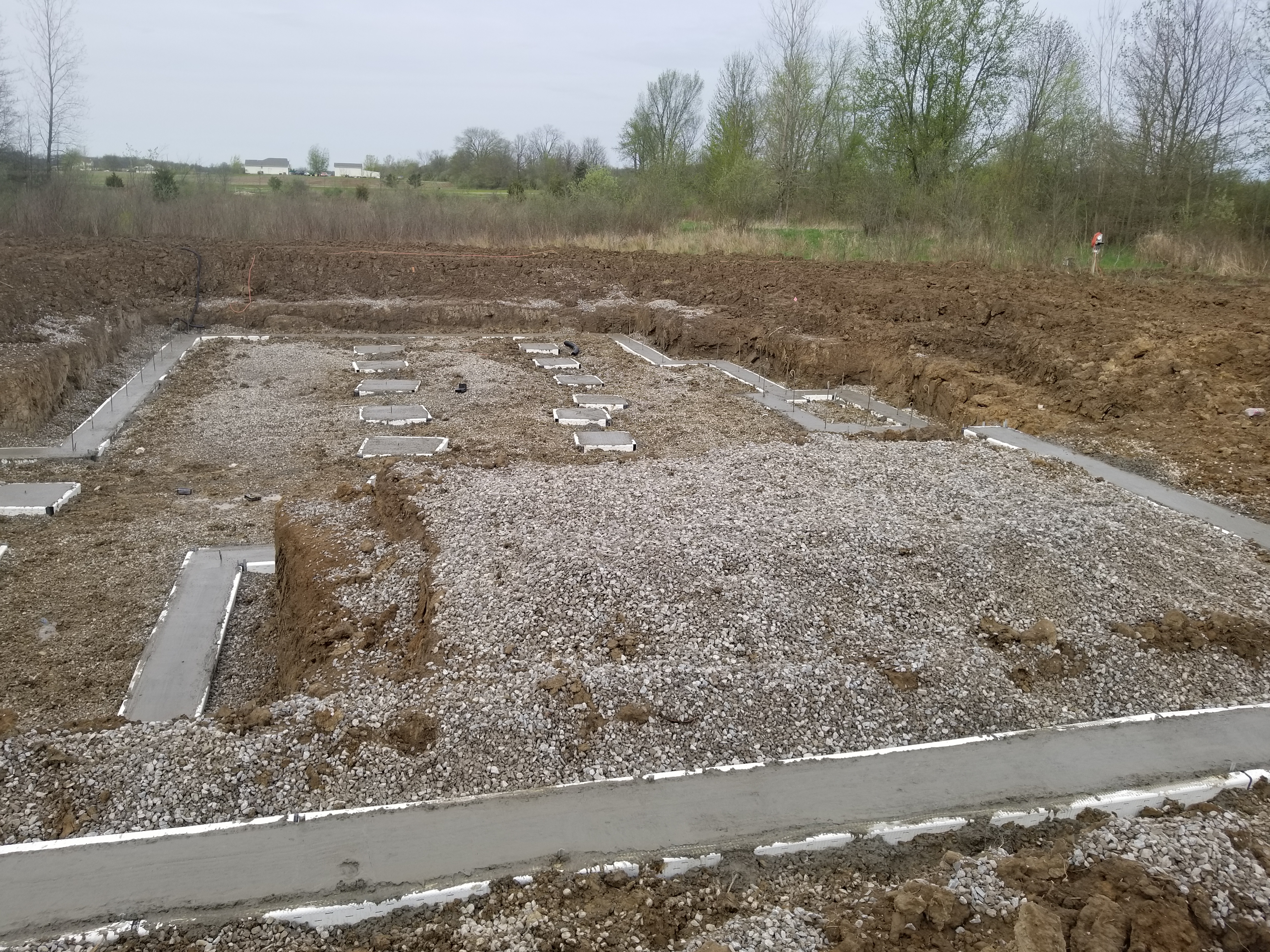 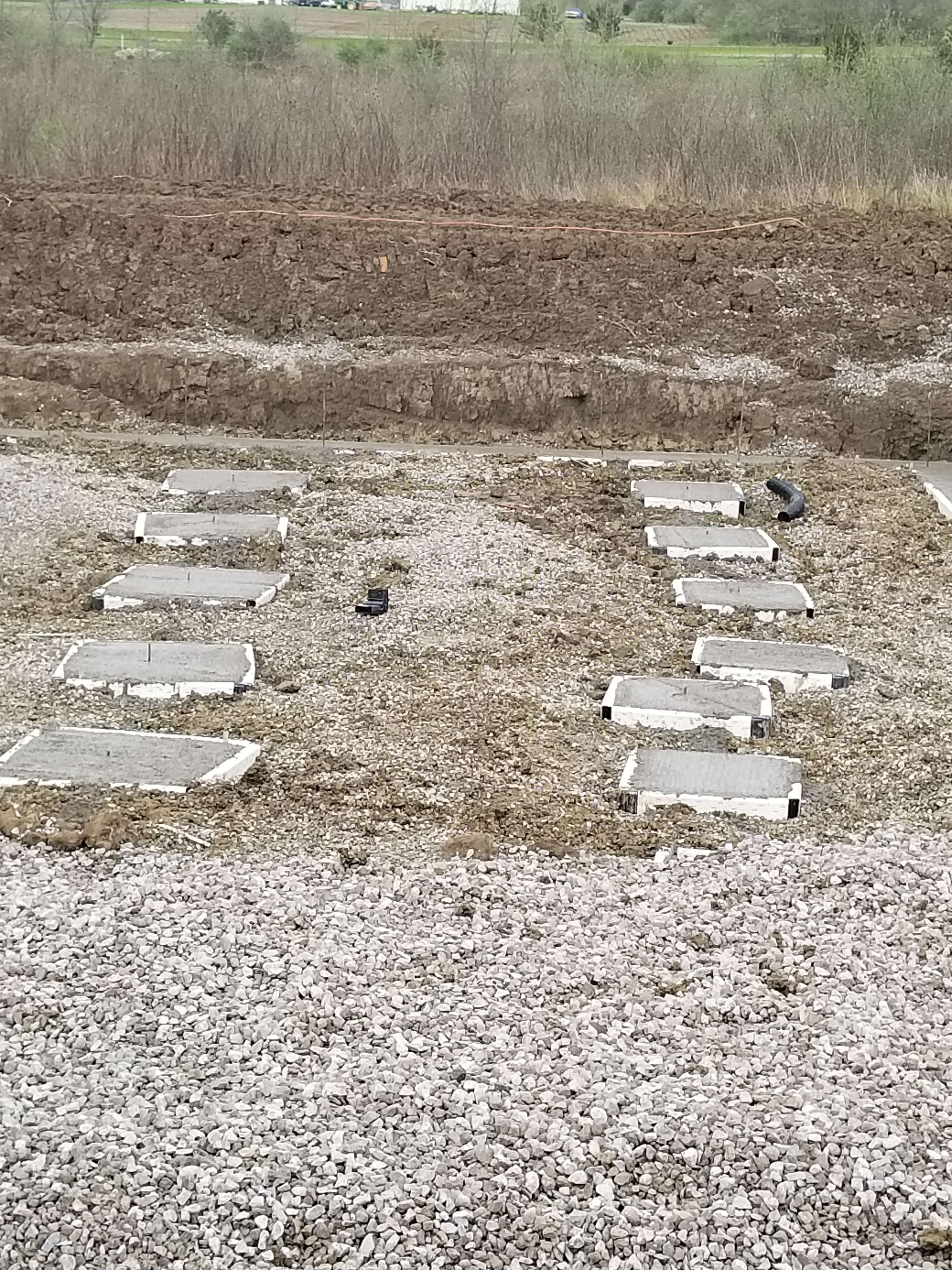 Of course our land is a bit of a mess, but I tell you what our driveway/septic/excavator (CDK) did us a big service by deciding to put a pipe under the driveway where he observed the water was flowing so that it wouldn’t wash out the driveway.  We also moved back the house based on the information he gave us on how he saw the water flowing.  Both of those things seems to have been very wise decisions. 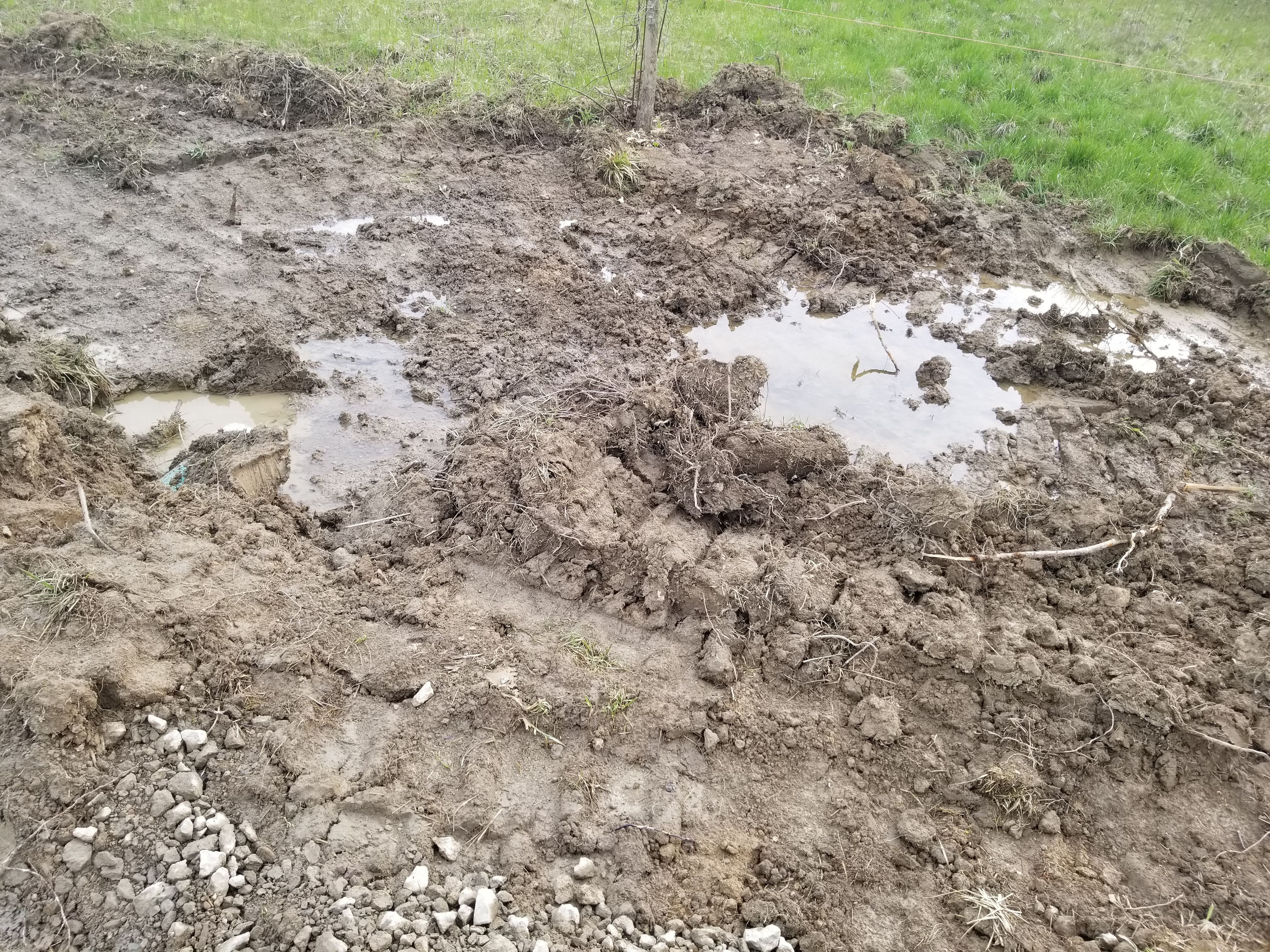 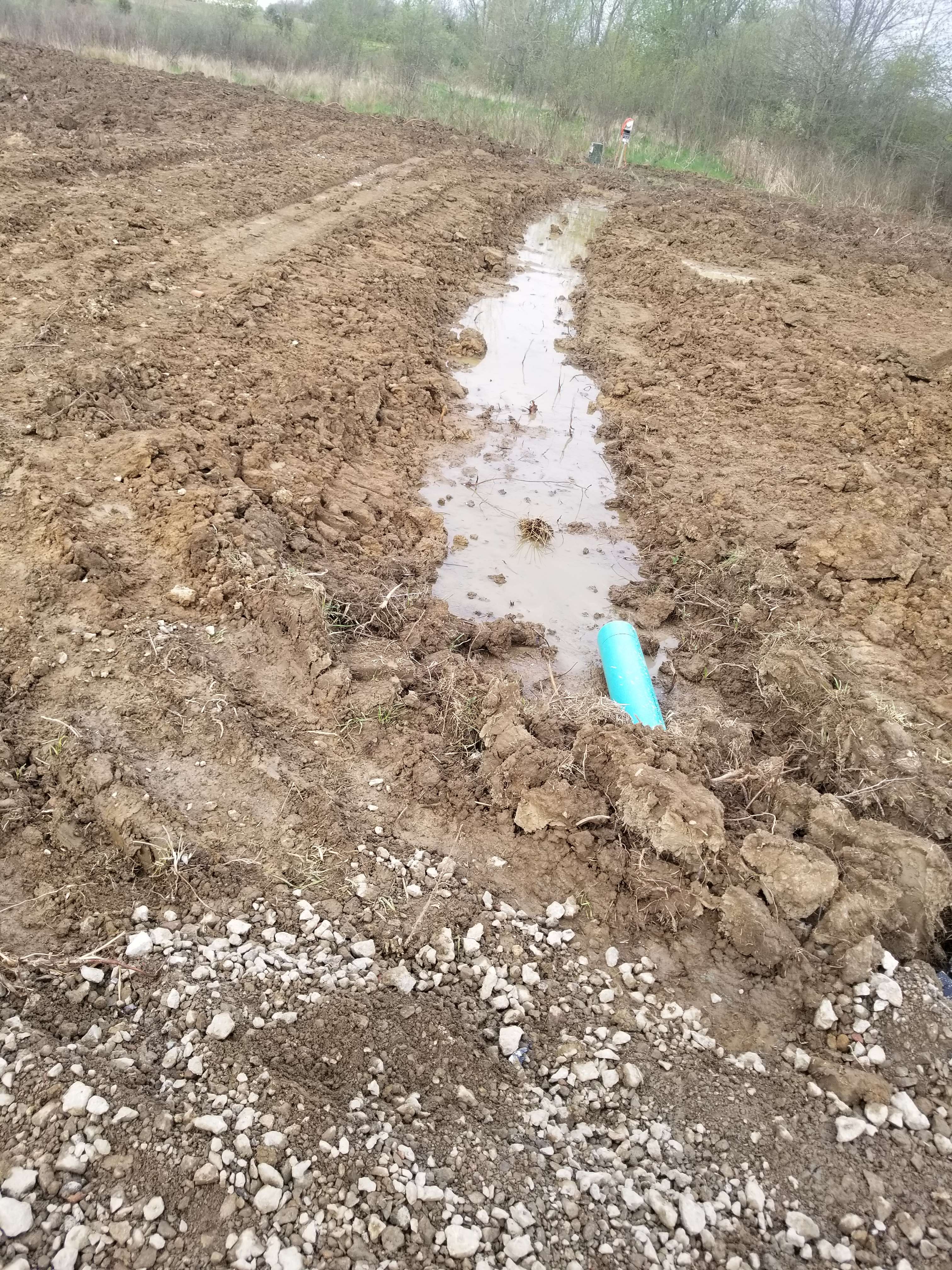 The only bad thing about today is that because it was raining and how they pulled the heavy trucks in, a bit of the driveway at the end was torn up and they disturbed the trench a bit that CDK made to funnel the water off the property.  Richard looked at it and said it looked like a small amount of water was still getting through.  It’s supposed to be warm still for the next couple days so hopefully a lot of the water will dry up.