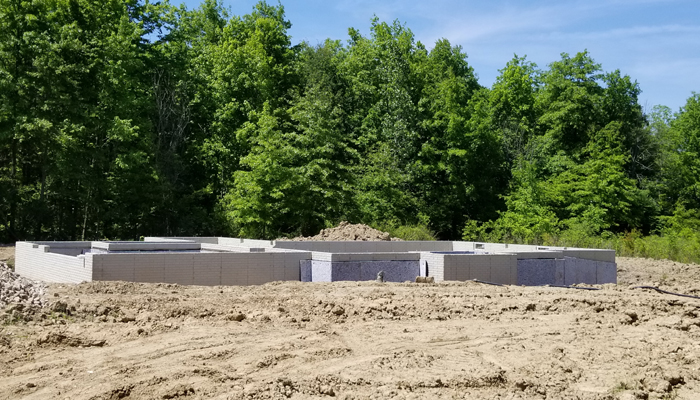 We finally had a chance to go back out to the property this afternoon and we got to see the waterproofing that was done on Tuesday (day 23).  We arrived to some huge piles of rock that is going to be used to backfill. 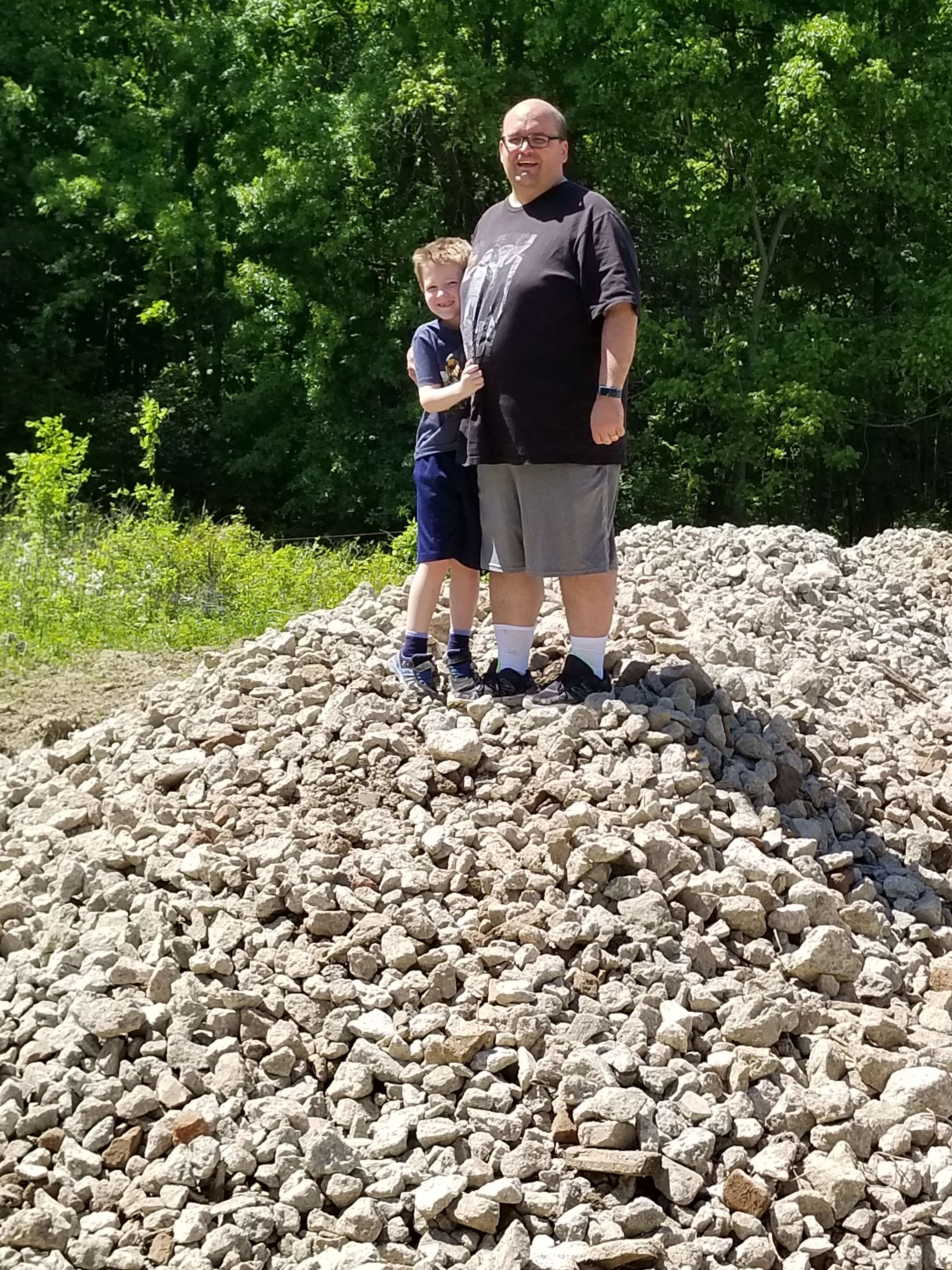 The waterproofing looks good and is very straight and clean.  Honestly it’s a better installation of it than was done at our last house which was also a new build when we bought it (although we had nothing to do with it’s design or construction process, we bought it as a spec).  I’m used to seeing the tar or whatever the black stuff is, a little sloppy to be honest, so I was pleasantly surprised at out precise it looked. 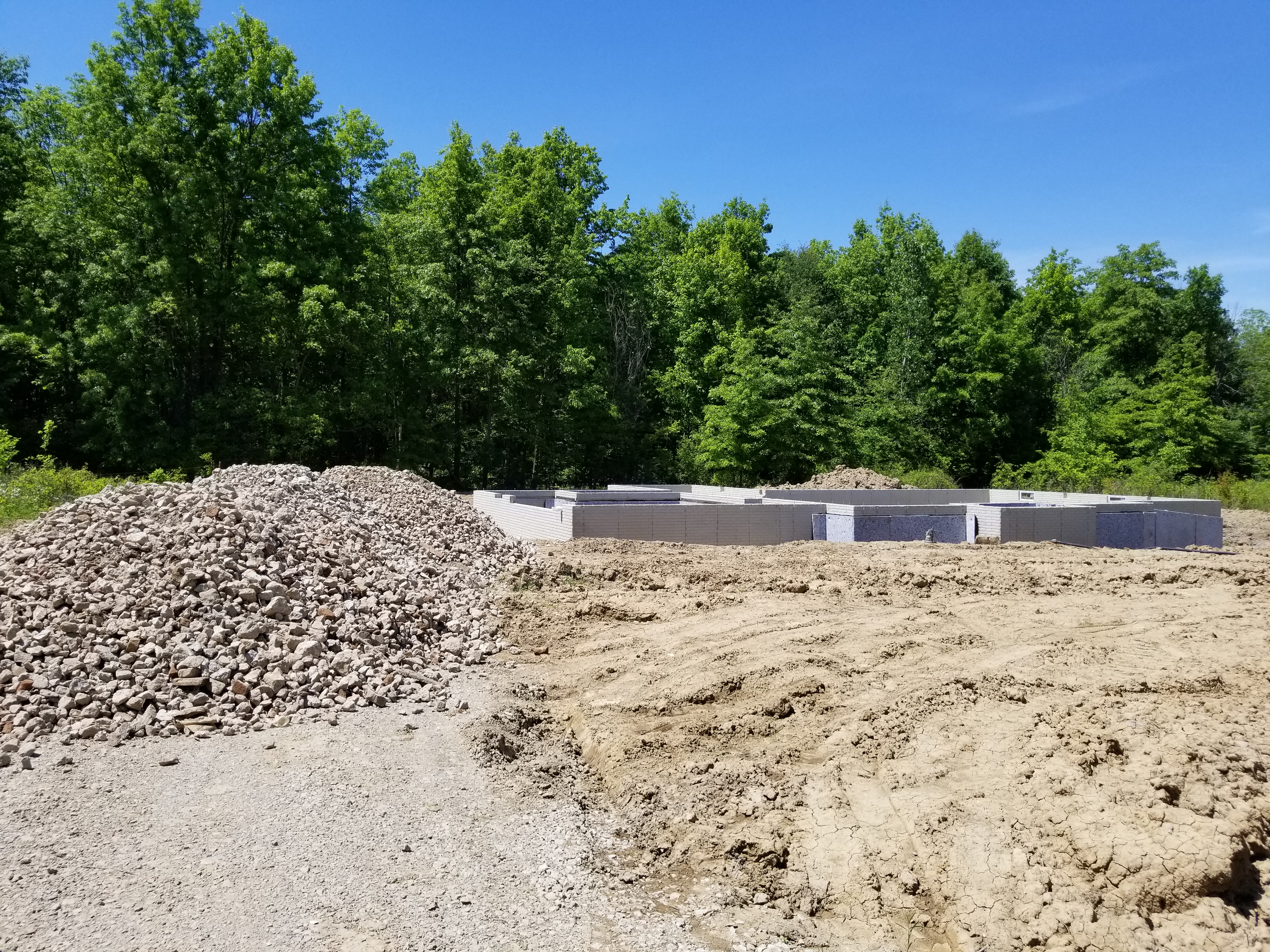 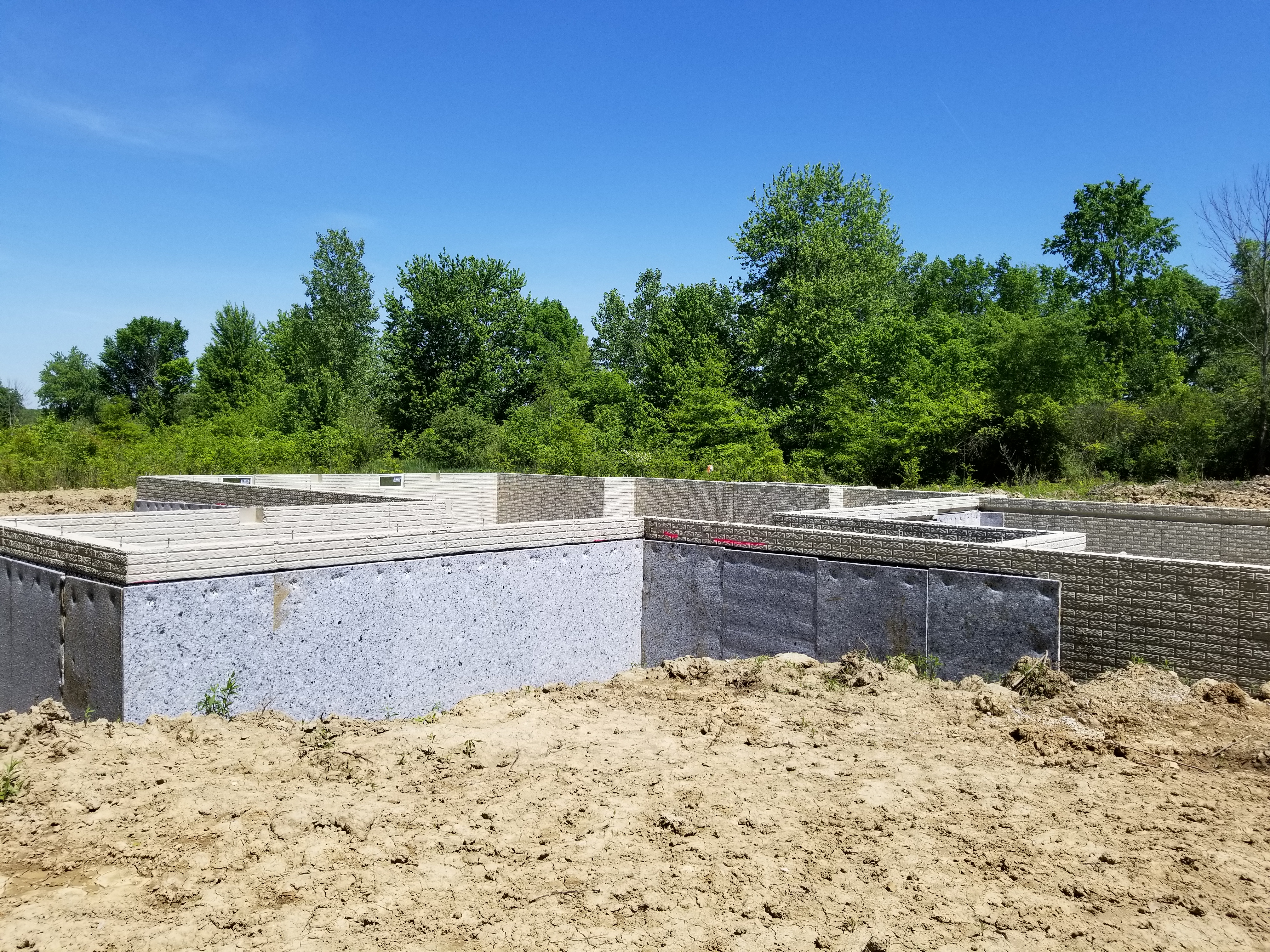 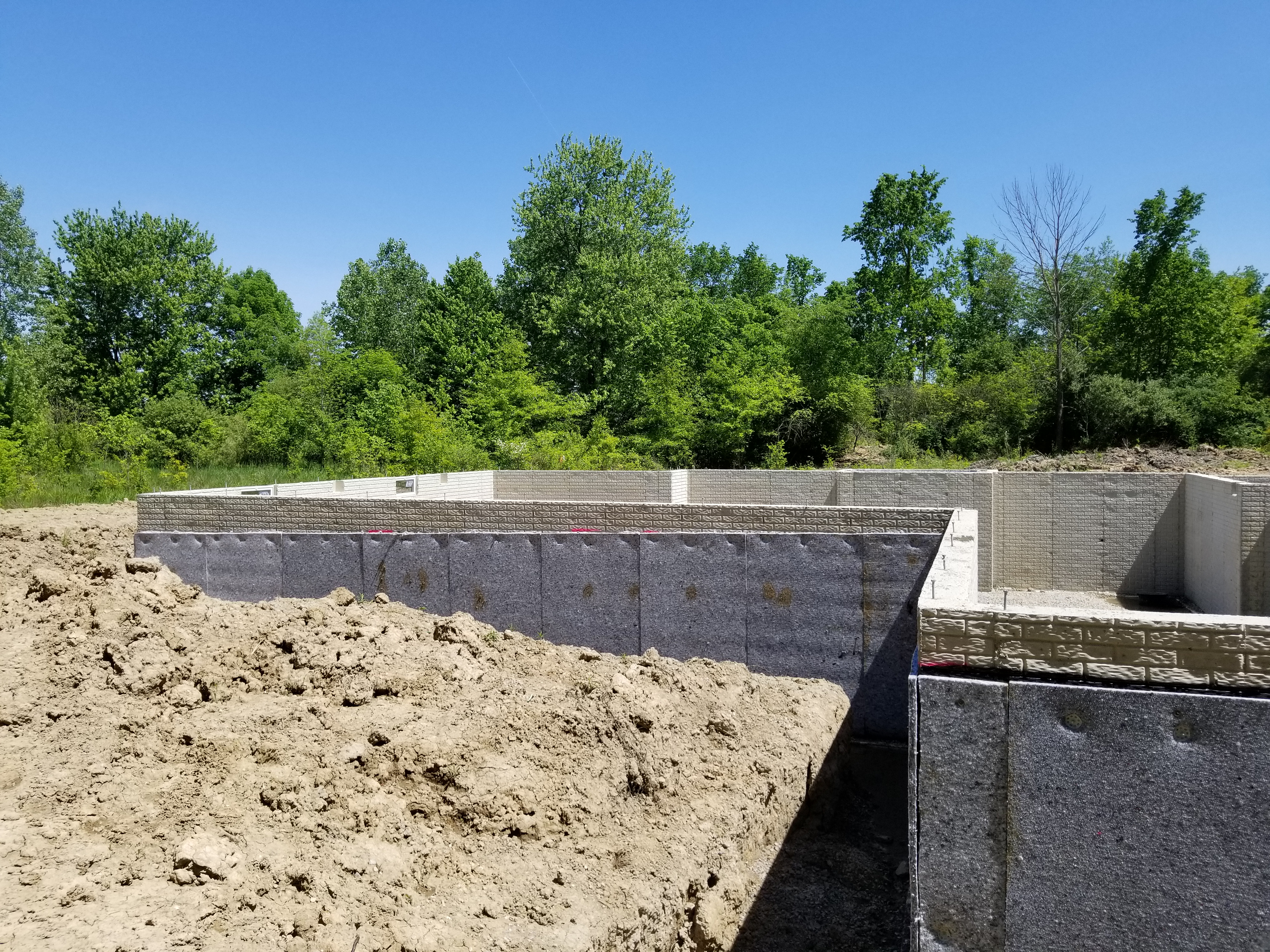 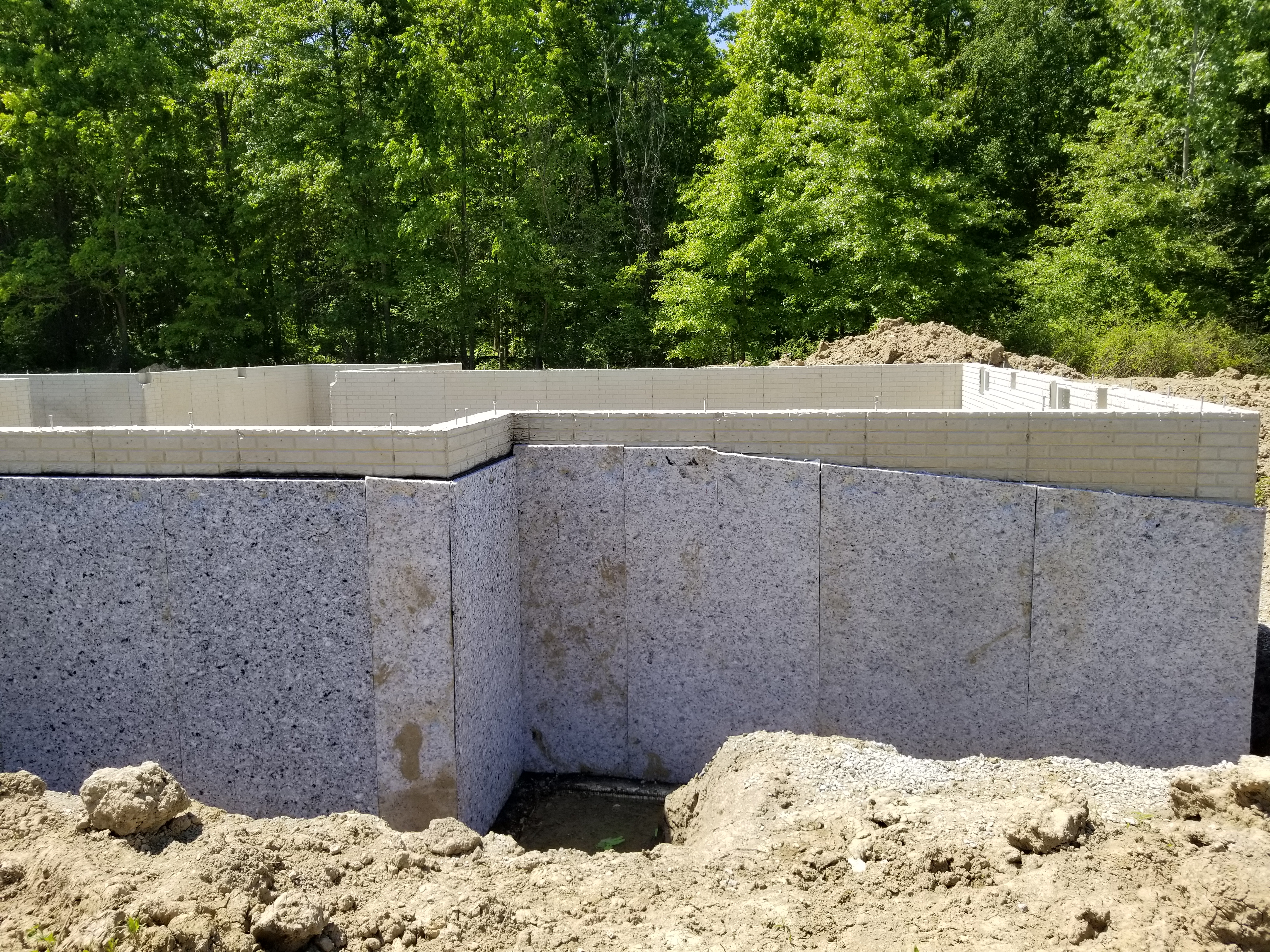 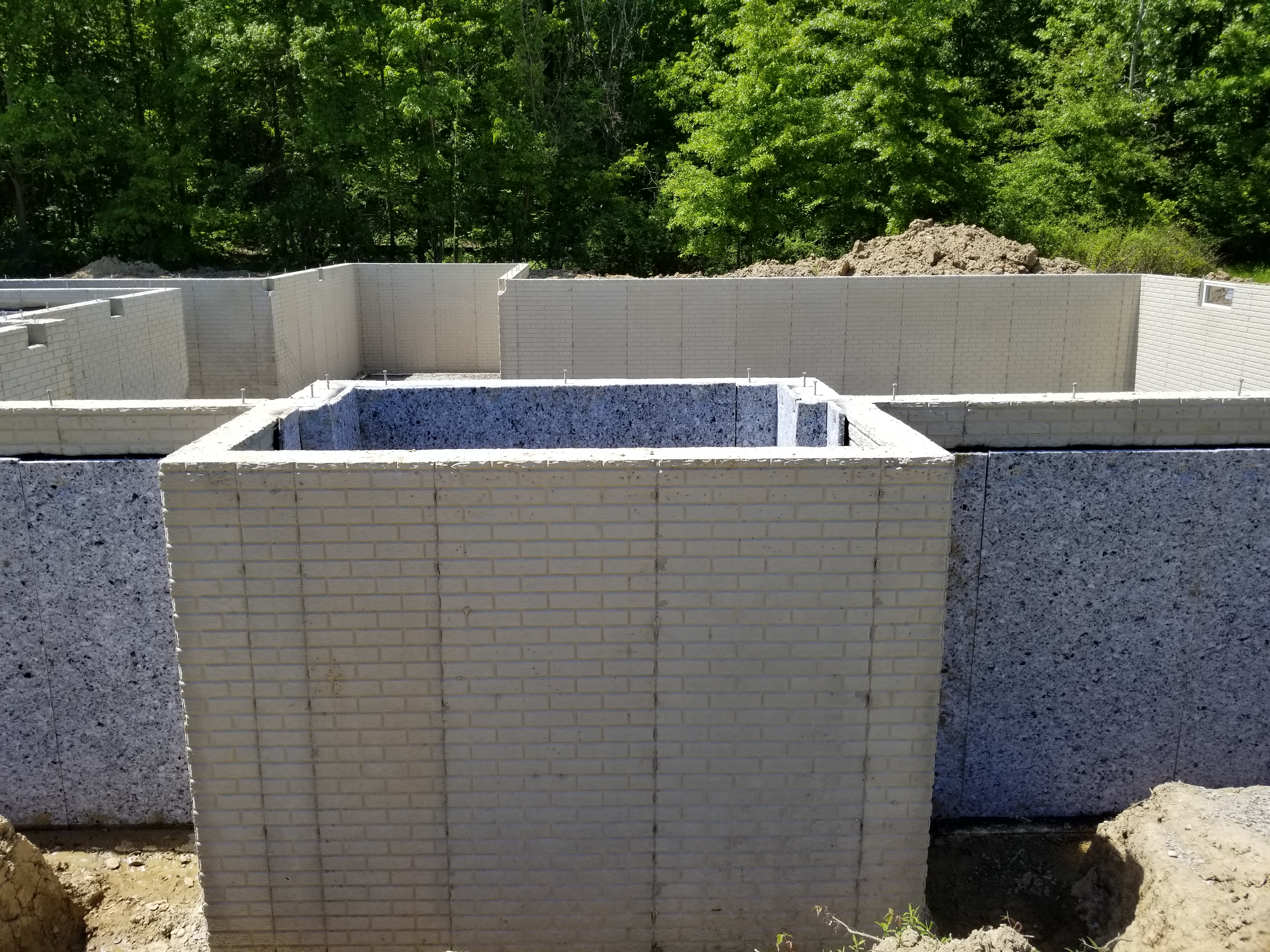 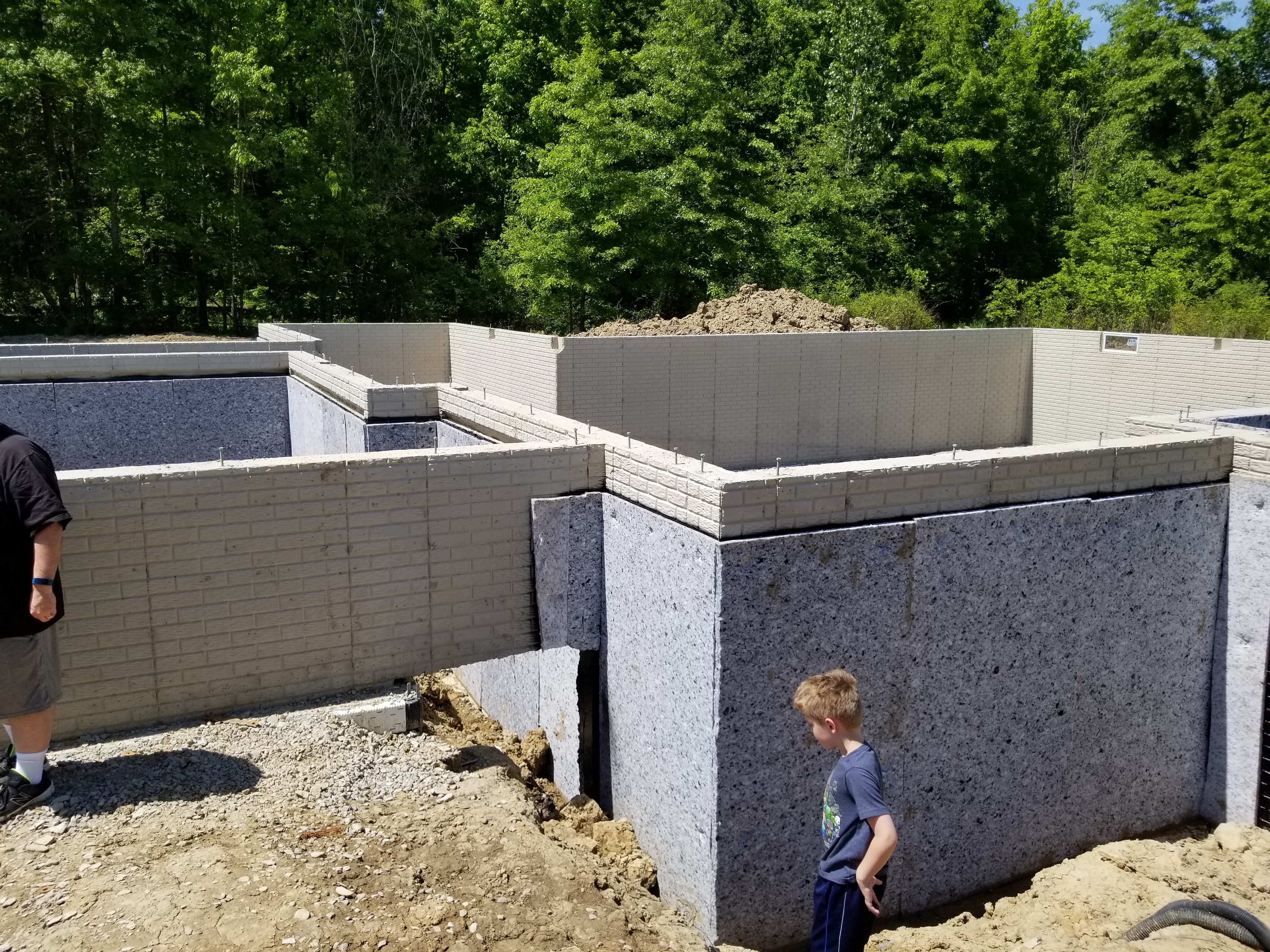 Another little surprise we got was that the windows were in for the basement.  They were done yesterday (day 24, we caught the change on camera), but we didn’t realize that before going out there so it was a nice surprise to see them in. 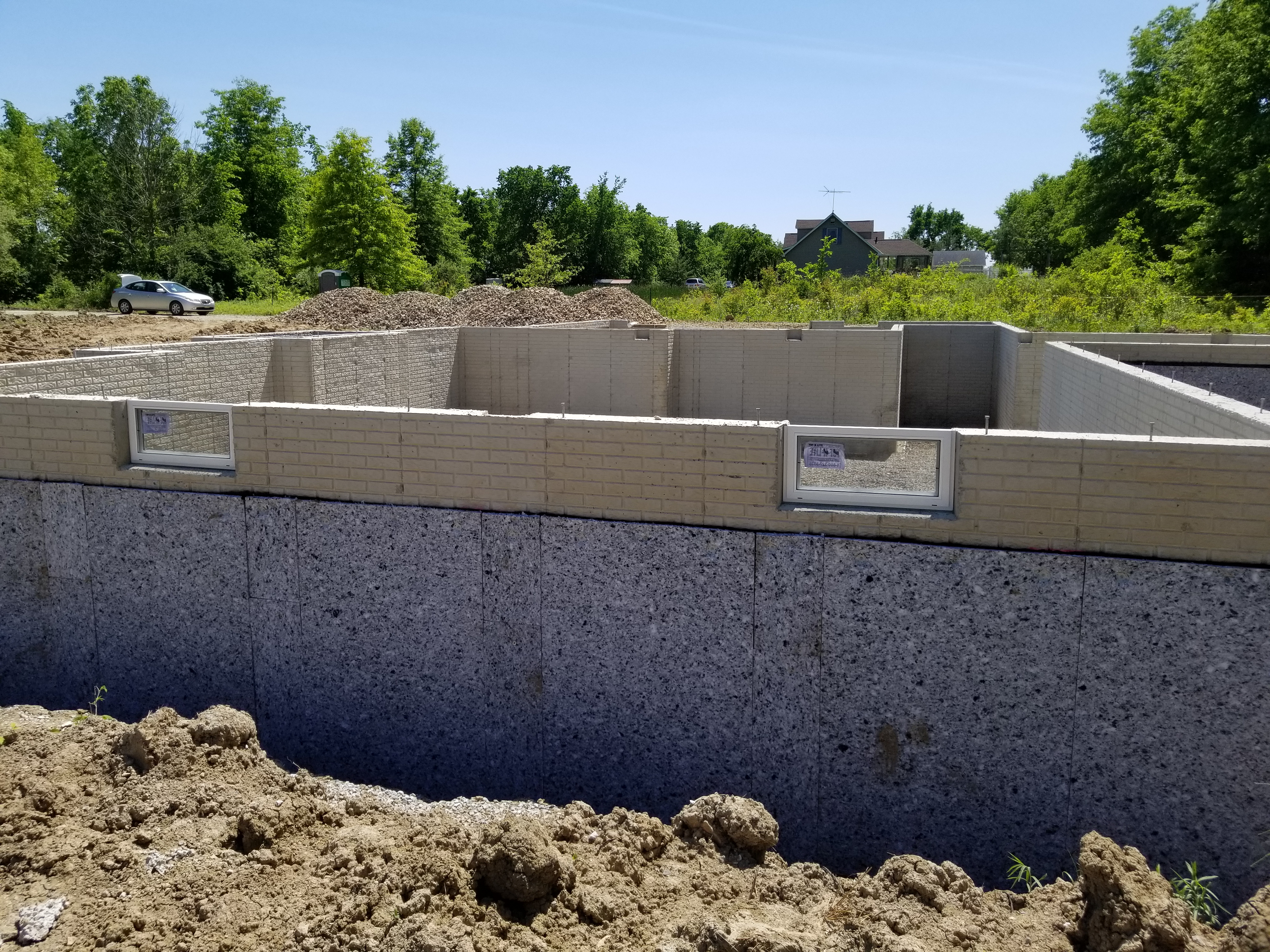 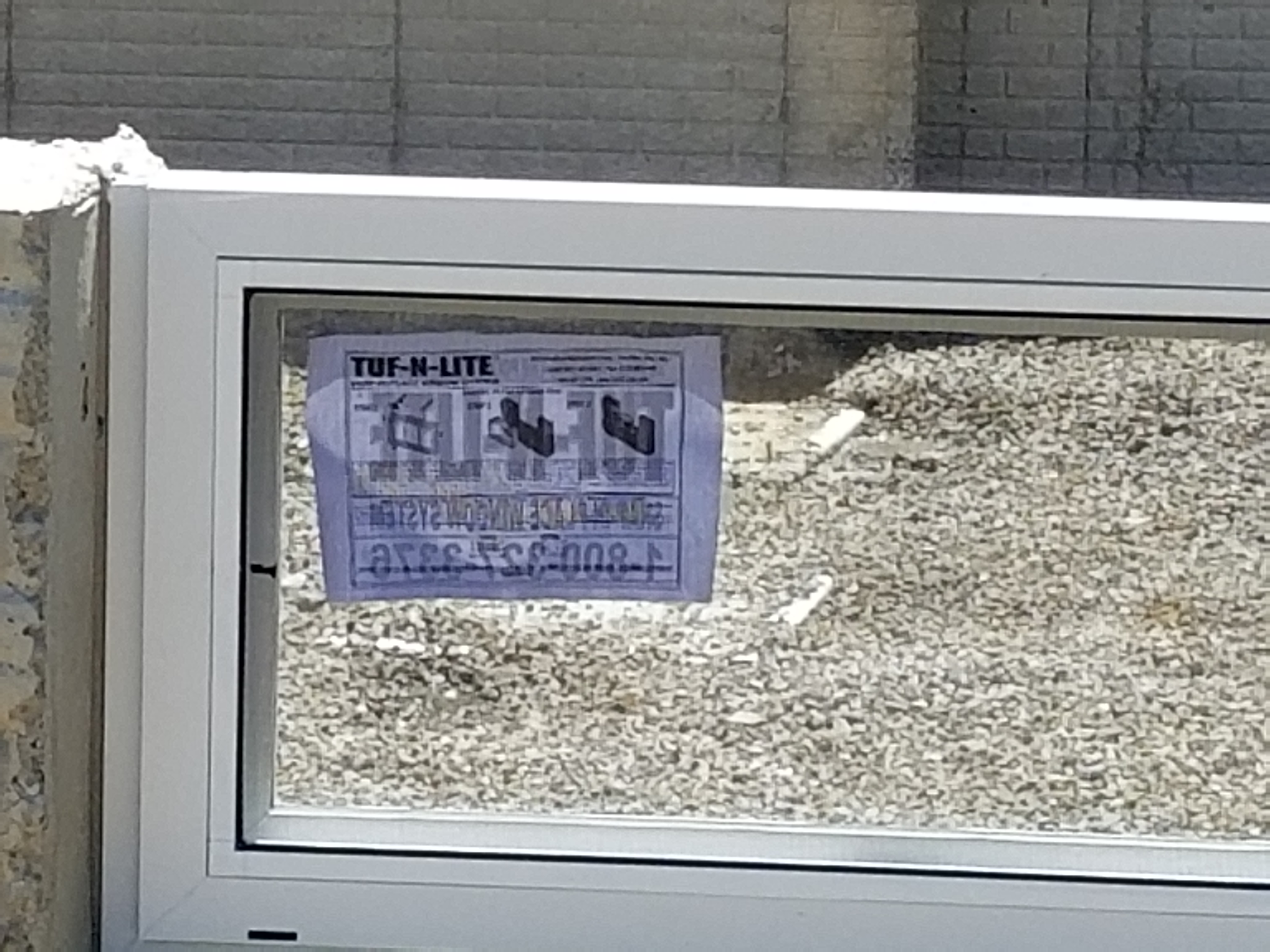 Also on Tuesday, the landscaper we have been using to cut down trees started the tree removal in the area of the septic.  We had given him the green light on Monday and told him to do it whenever he could, but didn’t expect them to fit us in for a while.  They ended up having an unexpected opening on Tuesday and came over to do some of the work. 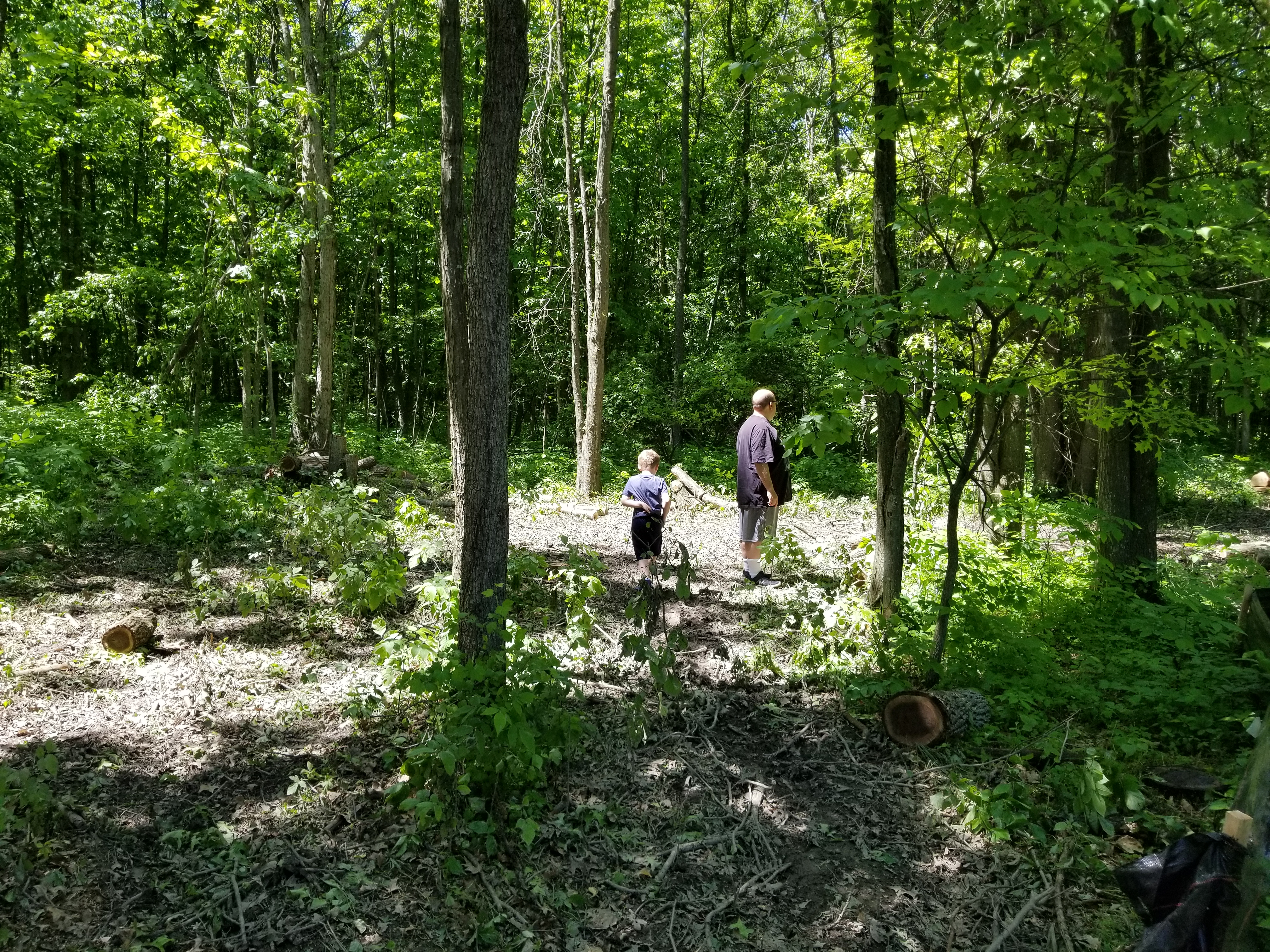 It looks like they got a good amount done and left the logs from the tree trunks at the base of each area as we asked them to cut them up for us to use in the future for a fire pit rather than to chip them. 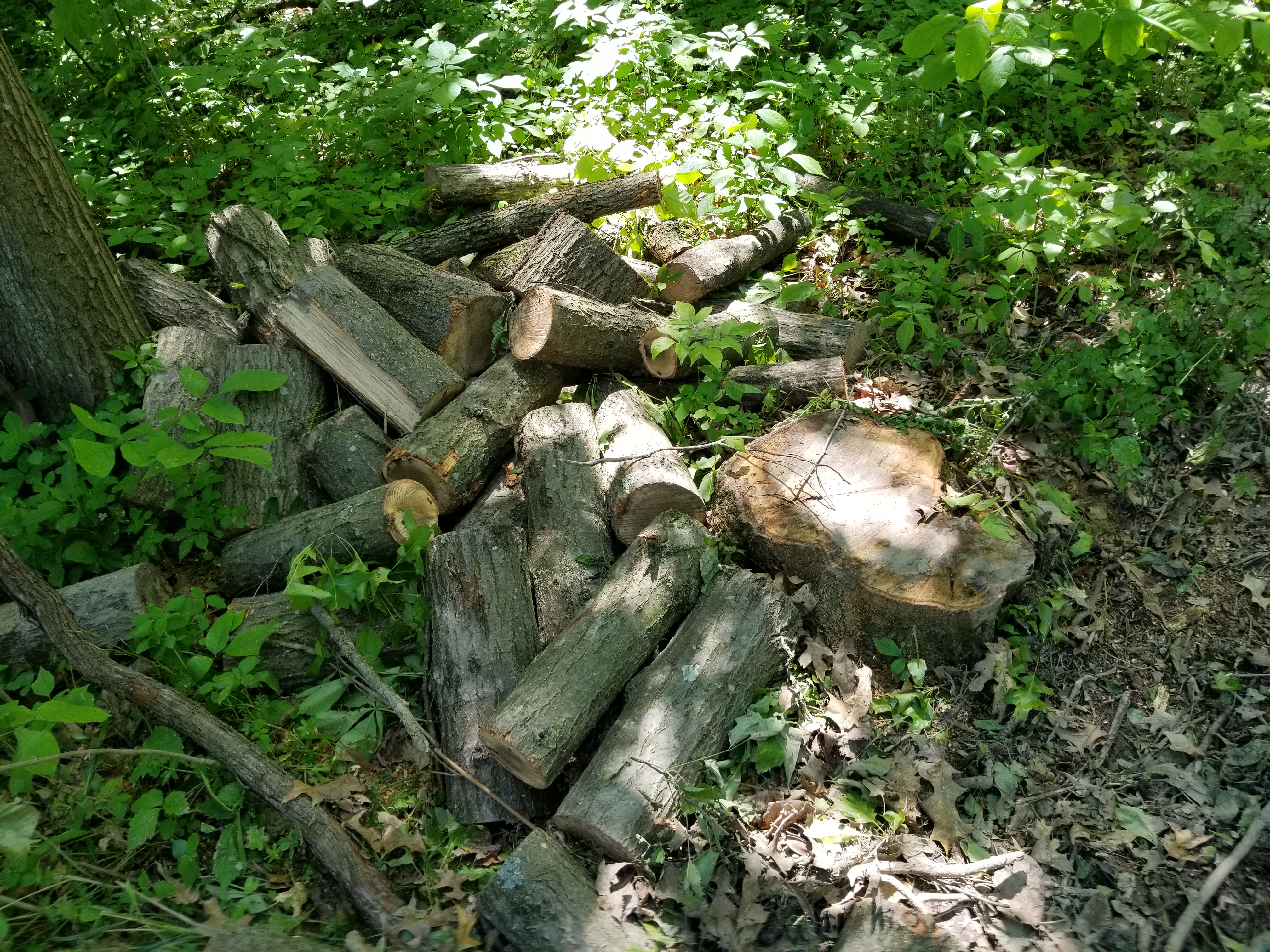 We will probably need to find a place to move them and stack them all up, but that shouldn’t be too hard as most of the trees are not too wide.  We may need to ask our septic guy where we should put them so they will not be in his way.  They were not able to grind stumps as the ground was too wet from rains last weekend, but they hope to come back and finish on Friday.  Backfill is also going to be happening then, so hopefully there is enough room for them each to do what they need to do without getting in each other’s way. 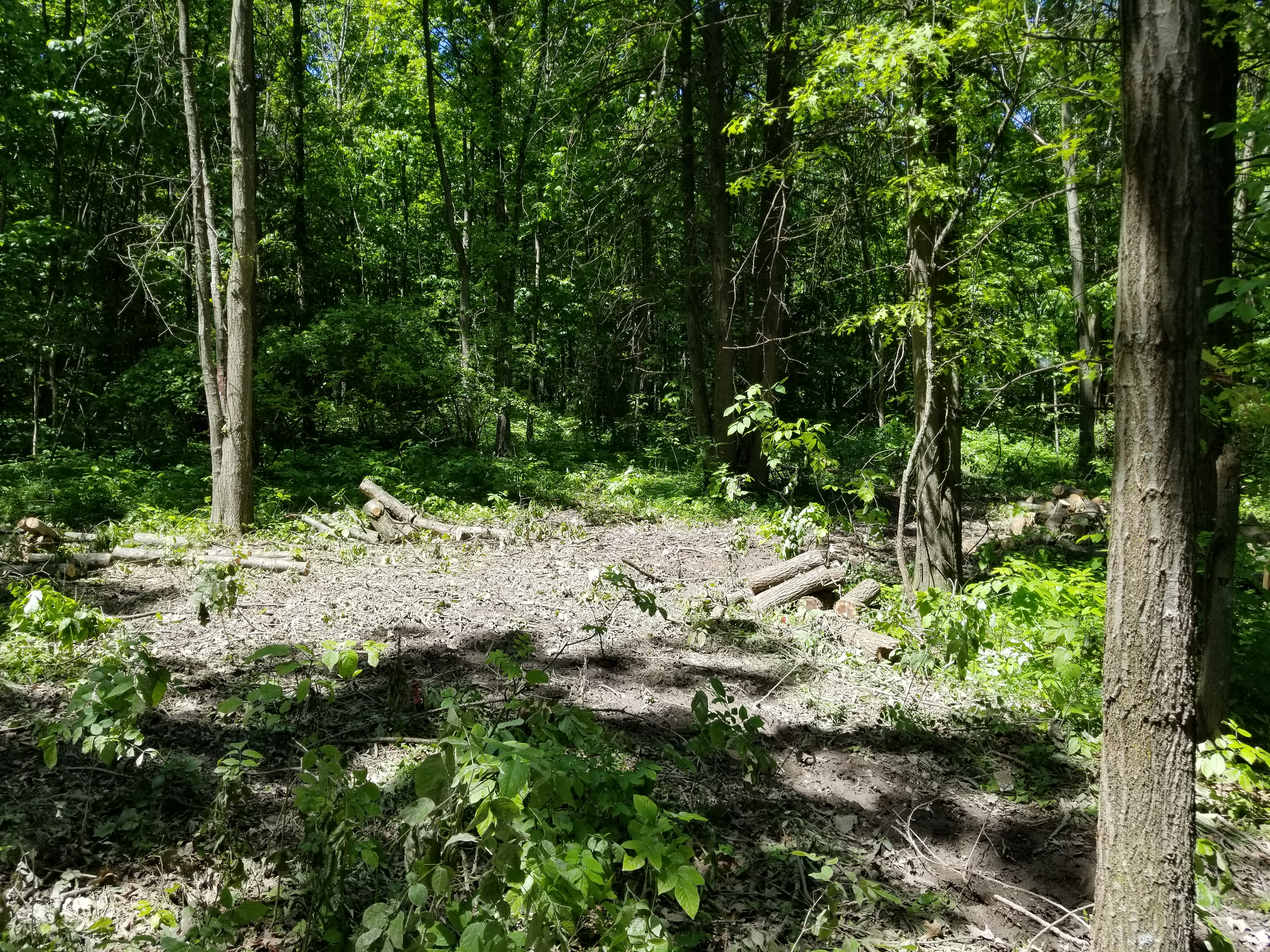 In other news, I mean to mention on my last blog post that the majority of the trash was picked up and put in a pile when we were there Monday night and today got there, that pile was gone.  There is still some random things here or there, but the vast majority of the plastic trash and aluminum cans are gone.  Eventually we plan to get a metal detector to have some fun on the land, especially around the old railroad bed, but I do know we will also find some random pieces of rebar in the front yard!  ?  Who knows, the grading at the end might lift some of that stuff back up and we can pull it out.  I know I saw some of it sinking down in because of the rains and when that area is wet with all the soil dug up that is like clay almost, it is very hard to pull things out.  When we’re done with this process we’ll each have at least one or two pairs of shoes we will just have to toss…won’t even be worth trying to clean them up.

Also, just for our own peace of mind, we went ahead and again measured the closest corner of the house to the string line we placed between stakes at the property line.  We still come up with just over 34 feet away.  So even if the string line is slightly off, and the overhang from the roof is significant (not saying it is, but IF), we are still well away from violating the 20 foot setback limits.  I knew this in my head, we verified it multiple times even with the surveyor, but I wanted to know that I know that I know that we were right so that if the zoning inspector calls again, we can be a little more forceful in dealing with him.  I feel like he’s trying to make our lives a little difficult at this point.  If he truly thought it was in violation he should have measured.

Finally, yesterday Wayne Homes had us request our lender pay out the first draw on the loan.  Wayne gets about 10% when the loan was finalized to start the build and then is paid the rest of the money in installments as the build progresses and inspections are made.  We don’t have the full cost of our home loan during the construction process, but we do have to pay the interest on the funds distributed so far to Wayne as well as a couple other things during the build.  So basically from here on out, about every month there will be a draw and our monthly interest payment will go up.

This is why we were very careful on deciding how much we were willing to spend on a rental because by the end, we will be paying our monthly rent, plus a pretty big interest payment on the home loan.  Many people try to stay in their current home as long as possible as to not incur the extra expenses of moving twice and paying storage fees, but I was not willing to risk that we would get a buyer at the right time and be stuck with 2 mortgage payments at once for who knows how long.  So much thought has to go into this whole process from beginning to end and you’ll still have surprises along the way you don’t count on.