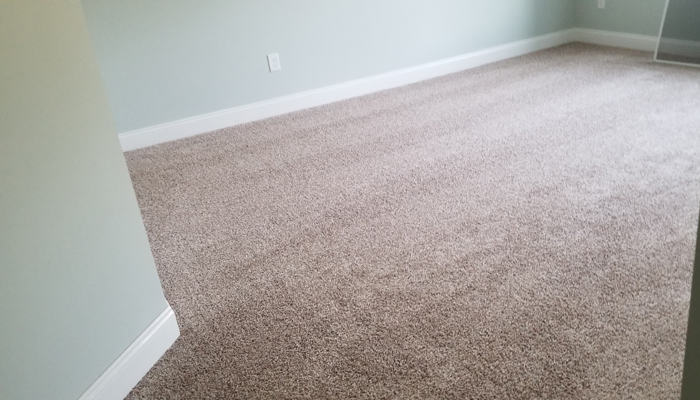 So we went out to the house tonight to continue pumping water out of the well to get the chlorine out.  We pumped for an hour or slightly more and the chlorine smell was pretty strong when we started, so we’ll be pumping out a bunch more on Thursday.  We also knew that today there was supposed to be a bunch of final trim things done and carpet was to be installed.

When we got there a box was sitting outside.  It looks like it’s from Pella so we assume it was the replacement screen for the one that our Field Manager found was damaged.  We put it in the garage before we left so the box is out of the elements.

We also checked out the bacteria test we started on Sunday that was supposed to sit for 24 hours.  I would think that the amount of chlorine we are pumping out has killed any possible bacteria.  I think we’re in the clear, but we shall see when the health department does its test.

Looking at the criteria for the negative versus positive test this is what we observed:  no gas bubbles really, gel at the bottom, color was more orange than yellow or red, but although the gel was at the bottom, the color was not what I would call clear above it.  I don’t know if we did something wrong with the test or what this means, but with the amount of chlorine we are pumping out and with most of the negative criteria being on target, we’re going to go ahead and call the county health department to come test the water soon.

Now onto trim work that was completed.  First there were 4 locks installed.

The dead bold on the back door:

The privacy locks on the bathrooms downstairs, which required the whole handle to be swapped out.  You will now see the buttons present to lock the doors:

The privacy lock on the bathroom upstairs which has a pocket door:

Speaking of that pocket door, you will notice that the door is a different color, that’s because it was installed today too and the painters will have to paint it when they do final paint: 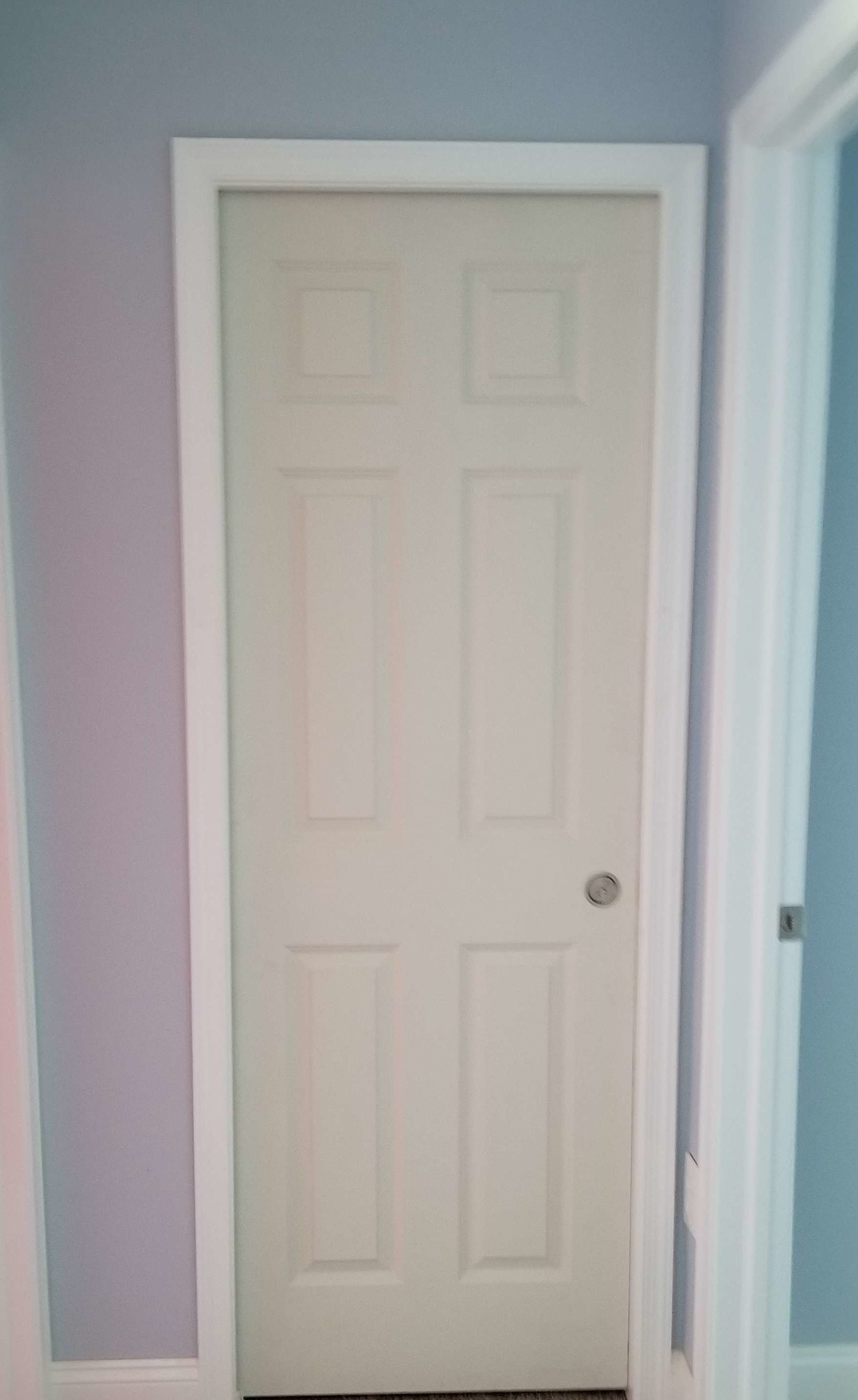 The handles for the powder room arrived and the holes were drilled but the handles were not installed yet.  We had to get 2 handles that were slightly smaller than the ones on all of the rest of the cabinets because the bigger ones would not fit the two tiny drawers at the top of the cabinet:

The full size cabinet was installed so there no longer is one cabinet that is too short:

All of the screens were positioned in the correct rooms by the windows.  I don’t know when they will be installed, but the final inspections with the county are tomorrow and I don’t know if they need to see that they exist to be passed off on or not.

Now for the carpet!  It was all installed and looked nice.  There’s some left over in the garage, I don’t know if they will leave us that for potential patching or at least part of it or not, but the garage in general has a few other things they have left us (extra tiles, grout, etc) so we’ll see.

The thresholds look nice and unobtrusive.  They had some extra carpet pad put down as pathways so workers to not get the carpet dirty.

Coming up the stairs:

Finally, while we were there running water out of the well, I spent some time making nice labels for the network rack as I found my label maker while I was packing today.  Yay!  I love my lable makers…yes that’s right, I have 2 of them! ?  Organize all the things!  We had used some temporary stickers to label the lines over the weekend, but this looks so much better.

Richard also worked on hooking up our SmartThings hub and our Arlo hub.  SmartThings will allow us to control our smart switches, dimmers and a host of other smart things we will be installing in the house.  Arlo is what we use for security cameras.  They are wireless, upload to a cloud so even if they are stolen, the evidence is still available and give you free storage for 7 days but you can download videos before they disappear.  The Arlo Pro cameras we have also include 2 way audio and have an app where you can get immediate alerts if the camera goes off.  Richard also registered the smart thermostat so now we can see and control the temperature from our phones and figure out how to fix a mode that occasionally is going off and setting the thermostat up to 80.  Richard thought he turned it off when we finally figured out what was going on, but we found it back in that mode again…some schedule that we did not set.  All of this technology is great, but there will be a learning curve. ?

All in all it’s looking really good for closing on time as long as everything goes well with the inspections tomorrow.  We have one concern right now with the trim, but I am sure that will get fixed.  Besides that issue, the cabinet handles being put on and the screens installed, we have paint that needs done and a shower glass door to be installed, but from the builder’s perspective I think that’s just about it!  There’s a couple electric things I want to change or fix down the line.

In the upstairs bathroom for some reason they put the switch for the fan first when you enter the door instead of the switch for the light.  I’m praying there’s enough wire for us to simply change the position of these two switches ourselves.  Also there is the previously mentioned issue with no light switches being for the kitchen on the one side of the room, yet there are two on the other side of the room.  I still think something wrong must have happened there and it’s certainly not something I understood would be happening or I would have changed it as it doesn’t even make sense.

But in the grand scheme of things, these are minor issues that can be fixed and the overall process has been good.  Did it take a little longer than I would have liked?  Yes.  Were there some frustrations along the way?  Well I would say if everything went perfectly smoothly I would have been suspicious!  Ha!  But I think we’ve had a pretty good overall experience and would recommend Wayne Homes to anyone who asked.

Oh and in case you are reading this blog now or in the future because you’re looking for experiences and feedback on Wayne, I want to make sure I point out that although my blog says this is day 143, that does not mean they went over their 135 day guarantee.  The guarantee starts at the end of the foundation installation which includes backfill.  Our guarantee date is by October 4th. 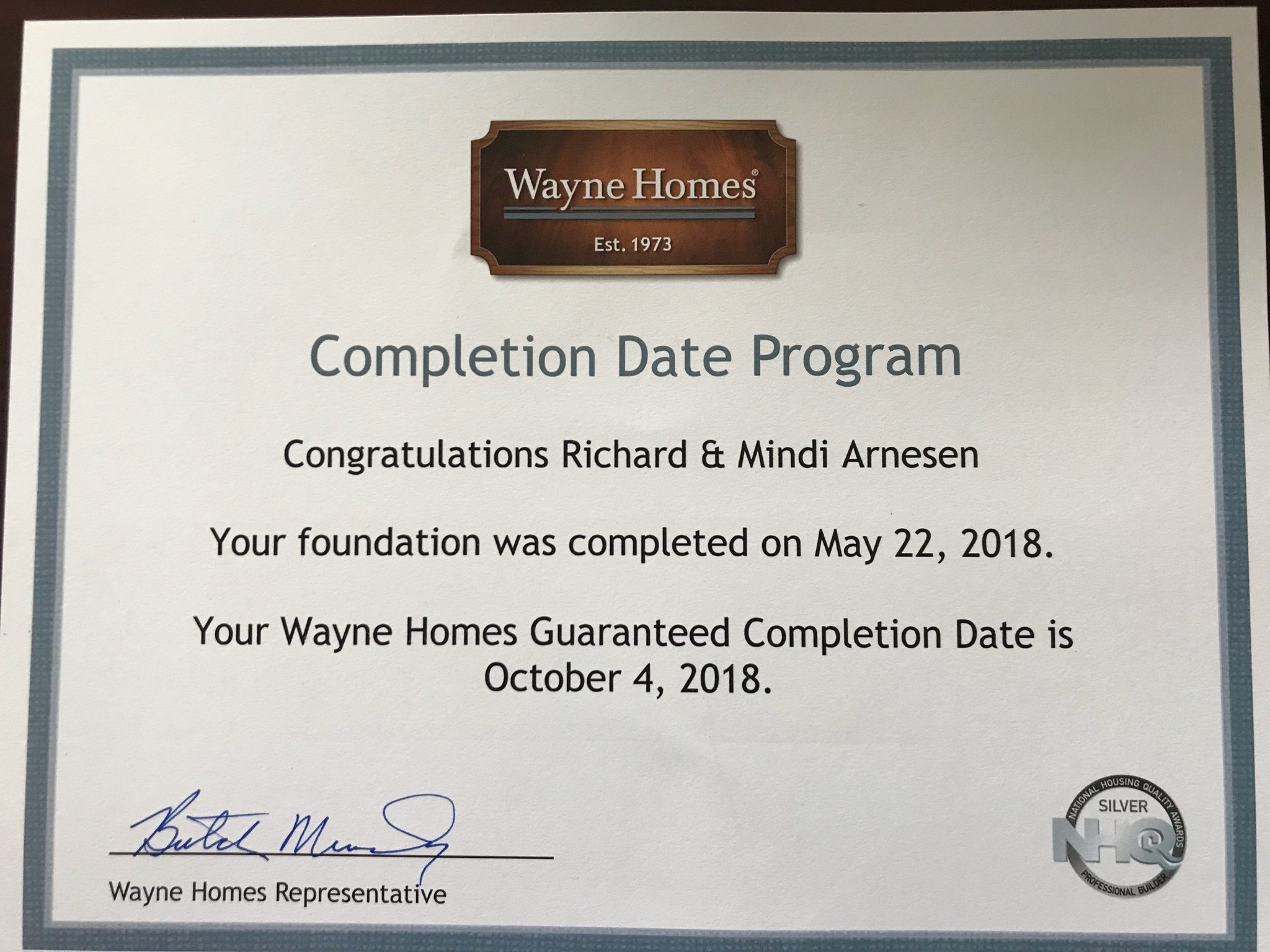 I’ll be honest and say we were hoping to be done several weeks ago.   We had looked at a log of blogs from other Wayne Homes builds and gotten an average on time until completion and based on that average we hoped to be in the house sometime last month, but we had several delays along the way and our house is larger than the average Wayne Homes build that the blogs were based on.  Some of the delays were on our end at the beginning.  We heeded some advice from some people we shouldn’t have taken and it took longer to prep the land to start the dig, other delays were just contractor delays, some were due to weather…but again, we should still be handed the keys and close about a week before the guaranteed completion date is here.

We probably won’t get out there tomorrow and honestly I wouldn’t want to be in the way when they are doing inspections so our Field Manager can submit for the certificate of occupancy anyway.  We definitely don’t want to slow that down!  But we will be back out there on Thursday to pump more chlorinated water out of the well and meet with our first landscaper to get some estimates.