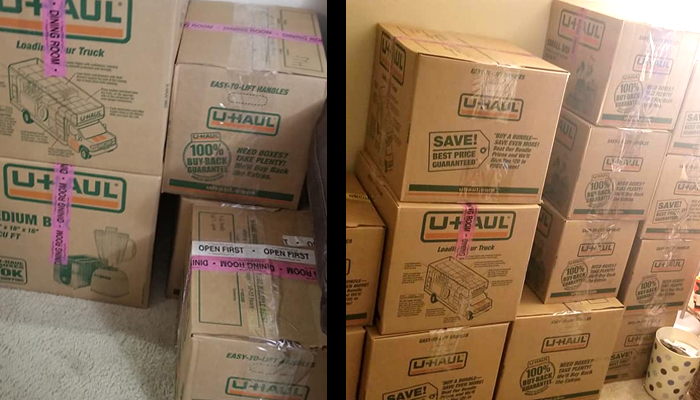 Today we did a pre-walk with our Field Manger in preparation for finalization of our house.  That’s right, we’re steaming towards the finish line!  Before I talk about that though let me tell you about the last couple of days.  On Wednesday I believe I mentioned that the doors were open when I got there and the thermostat was set to 80.  Obviously the doors were a function of the people in the house, but the thermostat we made an assumption was changed because maybe the people doing the sealing in the basement for radon..that maybe they needed ventilation for what they were doing and didn’t want fumes getting in the A/C system or something.  I didn’t ask them directly as they were finishing up their work and were leaving around the same time as the other contractor putting in the garage door opener, so we just shut everything up and put the thermostat back to 71.

However the next day we discovered that the thermostat was set to 81 and the flooring people had never showed up but the tiling tools were gone.  Richard talked to our FM only to find out that the contractor that was set to do our flooring had done their first job with Wayne and had done a horrible job.  We learned more about it today but basically it sounded as if the tile job was completely botched and was crooked and that the shoe mold trim was put on over the flooring with large staples that were very visible instead of typical tiny finishing nails.  Least to say it was the first and last job they got with Wayne.

At this point we think the thermostat change was intentional and probably retaliatory by this company as they were kicked off our job because of the horrible job they had just done that was going to have to be corrected.  For us, this was probably a good thing, but we are now going to have to lock the house up because of this issue.  Up until now they don’t engage the locks because of how many contractors are coming in and out, but we’ve also not had any issues up until now.  We’re also going to reposition our camera to aim more towards the driveway and garage where everyone enters from.  I would like to think that now that they have their tools and have no reason to come around that the idiocy will stop, but it’s better safe than sorry.

This however left our FM scrambling to line up different contractors to do our hard flooring and tile in our bathroom.  We met the tilers today as they were getting there around the same time as we did and they seemed like a good father and son team.  It will take them until Tuesday to do our shower and bathroom floors.  The discovered a slight issue with the framing in our shower for the wall insert.  It is slightly off center.  We could have had the wall in that area reframed, but honestly it was not that far off, we’re the only ones going to see it and I didn’t want anything to delay us getting done.

The new hard flooring contractor is going to start tomorrow.  Yep, you heard that…they’re working on Saturday so that we can stay on track.  They will be putting down Luxury Vinyl Plank (LVP) in about 90% of the downstairs and in the upstairs bathroom.  LVP is a product that looks and feels similar to laminate flooring…which in itself mimics hardwood…but without the risk of damage from spills.  It is durable, easier to replace a piece is one does get damaged because it’s not tongue in groove and is cheaper than the laminate.  Since eventually we want to do hardwood, it a was a very good choice over laminate for us in the meantime.

The hard flooring install should take only 2 days, Saturday and Monday.  Tuesday or Wednesday the final plumbing should start and finish up by the end of the week.  Carpeting will be installed next Saturday.  After that our FM will submit for the Certificate of Occupancy (CO).  He told us that the CO normally takes about a week.  Of course there are inspections going on next week to prepare to get that CO.  We’re praying all goes well as we’re in a time crunch I didn’t really want to be in here at the end.  He’s not anticipating getting the CO approved until the 25th, which leaves closing on the 26th.  Based on this knowledge we called our moving company and set up moving for the 27th and 28th.  We absolutely can’t go later than that because the movers are all booked for the last 2 days of the month, so we don’t have a choice to move on any other days than the ones we chose.

Now to the rest of the walk thru.  Our FM is very thorough, we pointed out a few issue we saw with the subfloor, and he immediately took in upon himself to shore up not only the couple of issues we pointed out, but a few other issues he found on his own.  We went around putting painters tape by any and all things that needed touched up by the painters.  We talked about my irritation with the lighting in the kitchen, which he said he would talk to the electricians about but he can’t promise anything on that one but said it would be easier to possibly change since it’s on the first floor and therefore they have access to it through the basement ceiling.  We talked about my sliding door that slighting sticks and he’s come up with a plan to hopefully fix the issue.

We discussed the outside paint, the hole in the back door (he thinks they missed putting in a deadbolt), when we can have the appliances installed, when we can do the well sanitation, when the dumpster will be removed and privacy locks on 2 of the bathrooms.  He also got me a piece of the cabinet trim so I can match it to mirror frames as I have been worried that I will think something is a close color and then get it in there and it be off in some way.  Mirrors are fragile, I don’t really want to be dragging ones back and forth because they don’t match.

All in all it was a good conversation, we got a lot of information and now we can go to the appliance salesman and our furniture salesman to arrange proper delivery dates.  We also know we have a planned work day or two at the ends of next week to do some final things in the house with getting our network set up and ready to go for when we move in (DSL comes next Wednesday) and to sanitize the well so we can get our water passed by the health department which is something we need to have done to get CO.

While we were out there waiting on our FM to get there we got all of the final wall plates put in except for one because we still need to put a keystone on the phone line to plug it into the final wall plate, which is a combo plate with 4 COAX jacks.  Our “must do” list is getting smaller and smaller every day it seems.

I’ve started packing this week, as you can see by my cover photo.  We honestly don’t have a ton to pack because a lot of things stayed in boxes or are things we still have to use until right before we move (toiletries, towels, clothes, bedding, etc).  For the most part what I can pack right now is all of our homeschool materials (there’s A LOT), some extra kitchen things I am not going to use between now and then (mixer, crock bot, extra baking dishes, etc) and some personal stuff like books and papers.  We have the added issue of not having a lot of place to stack boxes so it’s a challenge if I pack too much too soon.