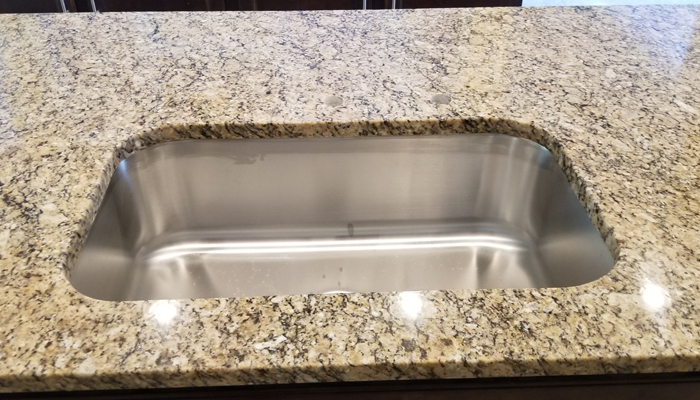 Today I was at the build to meet a concrete floor coating company to get an estimate on doing a finish on our floor.  We don’t plan to do it right away as it is a pricey expense, but it is something we want to do to protect the new concrete and make it easier to keep clean.  When I got there I was expecting to see the flooring installers, but they were not there.  Instead there were two other contractors we didn’t know were coming.

The other truck said something about insulation which didn’t make a lot of sense, but it turns out they were there to seal cracks in the basement floor to keep radon from getting into the house.

While I was there I took a few more photos of things I missed yesterday.

Speaking of the pantry, I took a photo of the problem with the sliding door there where the handle insert is hitting the trim.  Right now it is a small scuff but I feel like it’s eventually going to break a bigger chunk out there as it repeatedly hits in the same spot.

The kitchen sink.  I chose one deep bowl instead of a shallower, double bowl.  I rarely need two sides of the sink since I primarily use my dishwasher yet I often need a bigger or deeper sink to soak a large pot.

An up close look at the granite we chose, it’s called Venetian Gold:

Another look at the kitchen with the lights on.  It’s still not great brightness balance, but it does look a lot brighter than this in person.  The sunshine coming in the windows of the homeschool room definitely messes with the brightness in my cell phone pics.

When I got there the front door and the garage entrance door was standing wide open and it was 80 degrees in the house.  After the doors were closed and the thermostat reset, I figure the workers in the basement probably did that to keep the AC from turning on while they were using their sealing products.   They were almost done and about ready to leave so I doubt it affected their process to turn the AC back on, but our Field Manager had turned the AC down to 71 the day before to keep humidity down and have the subfloors at the right temperature for the flooring install and I wanted to make sure it was back where he wanted it to be.

We didn’t get an official quote from the floor coating company, but got a ball park figure.  With everything else going on I think we’ll probably be postponing it until spring, but we still have 2 other companies to get quotes from before we decide who to pick and what look we want which of course affects the price.

I will probably have another update on Friday as we have some finishing wall plates to do that evening and then all the outlets/switches/Ethernet ports will be complete!