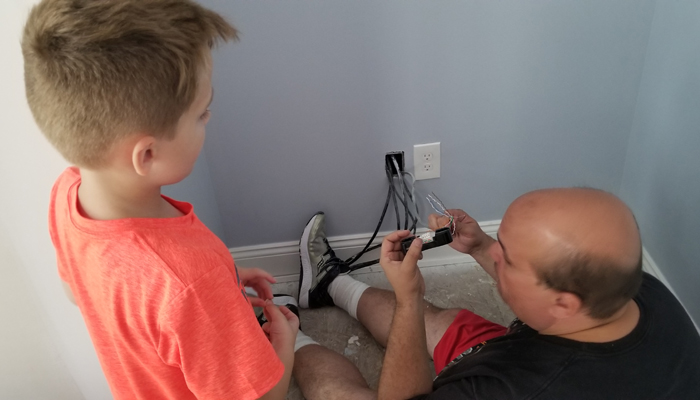 We spent our day today out at the house build doing the finishing part of the Ethernet cables we had run throughout the house.  We were originally planning to run it, but the electricians told us they would run it for $20 a cable which included boxes, staples and protection plates, but we had to provide the cable.  We decided we couldn’t run it ourselves for that.  What probably took them an extra hour or so of work would have taken us days to do and we would have had to buy some tools we didn’t have readily available (most of our tools are buried in storage) as well as the boxes, staples and protection plates!

Before we get to what we did today, let me show you a few pictures from yesterday’s work from the electricians.  They were on day 2 of final electric.  They have at least one more day, possibly two.

The fan we bought for the great room.  It has reversible blades as you can see from the second story picture, but I definitely wanted the darker side down to match all of our cabinetry.

In the basement they got my freezer circuit installed: 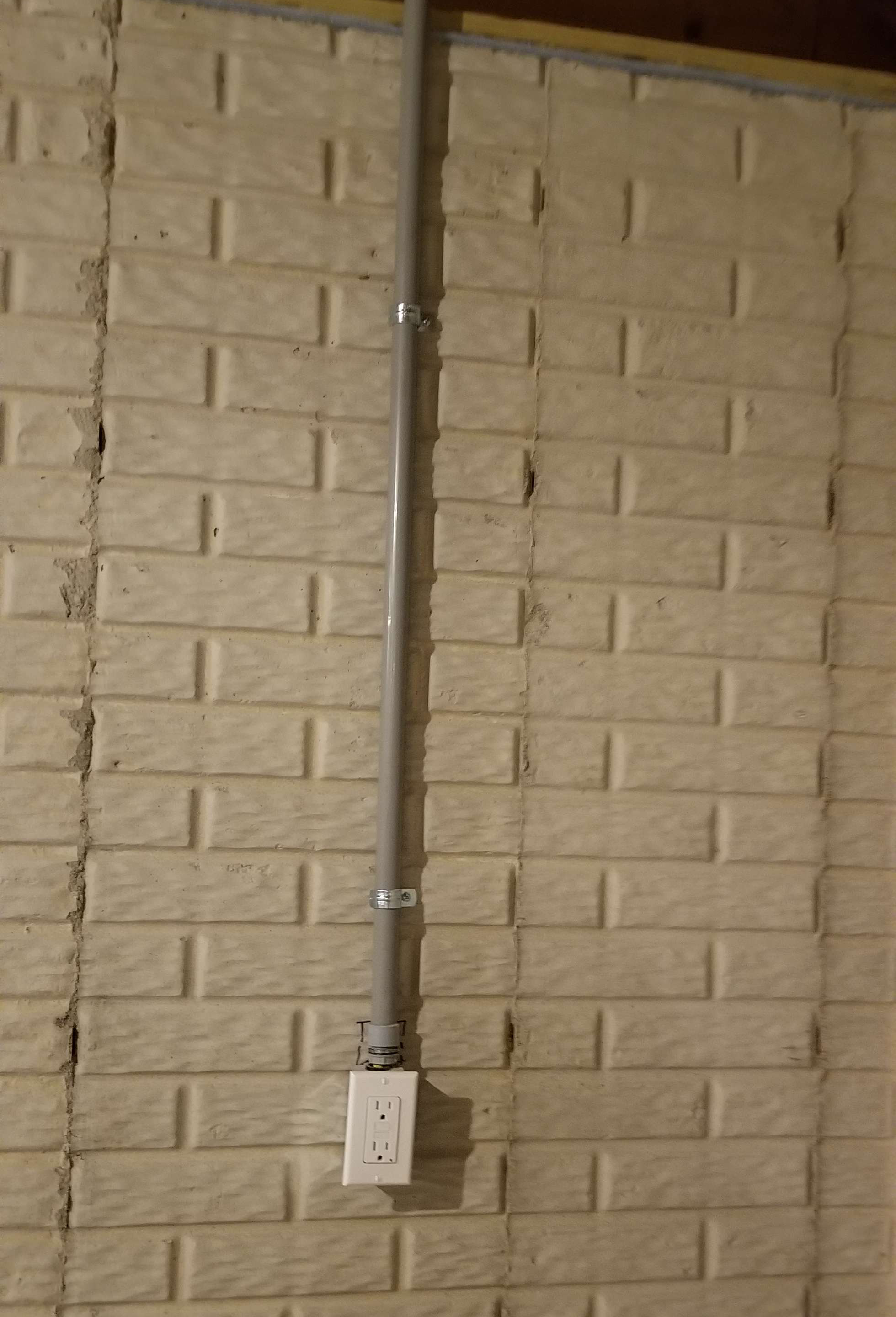 The panel got a few more circuits completed: 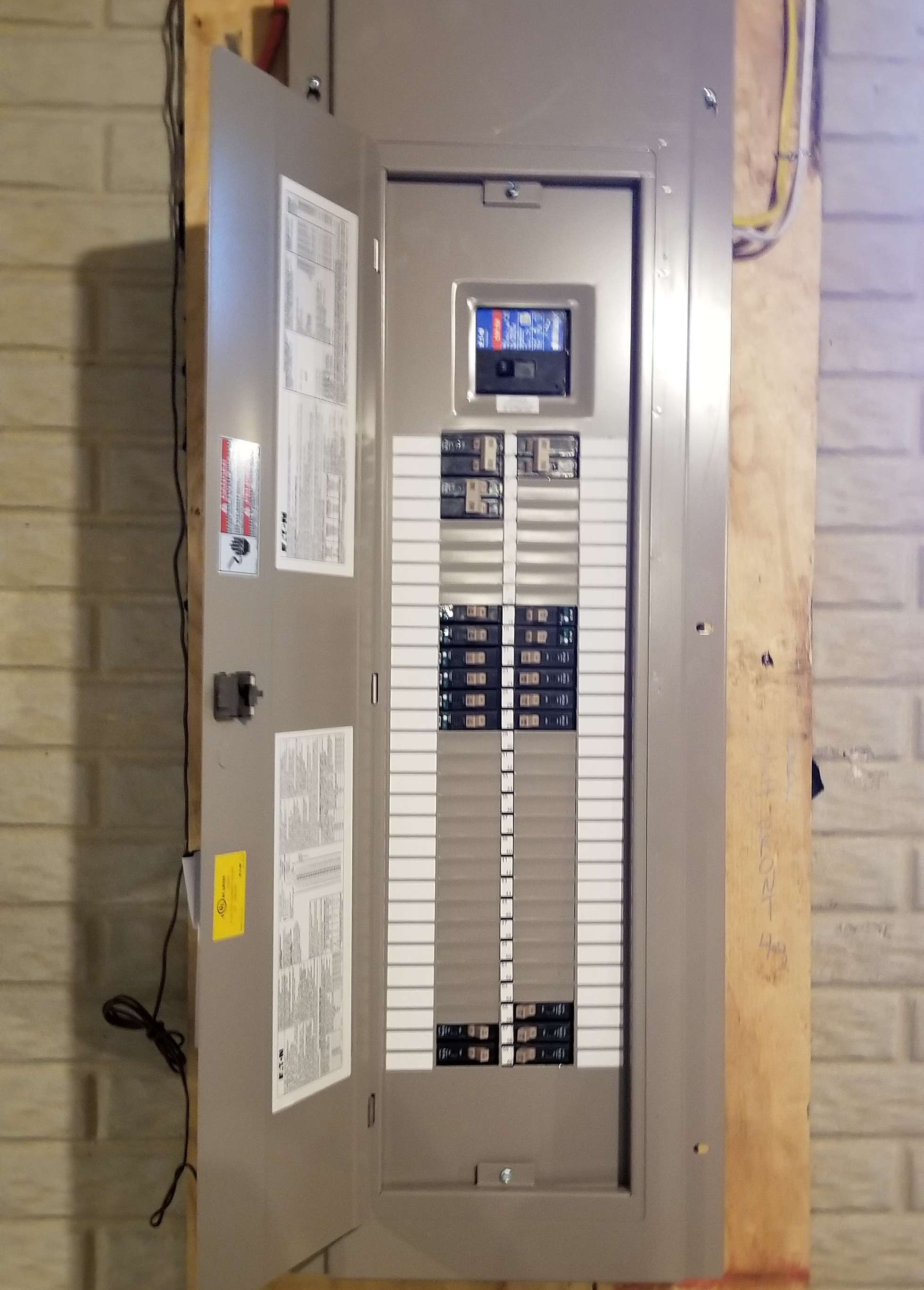 And we noticed while we were down there that the HVAC company had left us all of our paperwork attached to the furnace for the new systems. 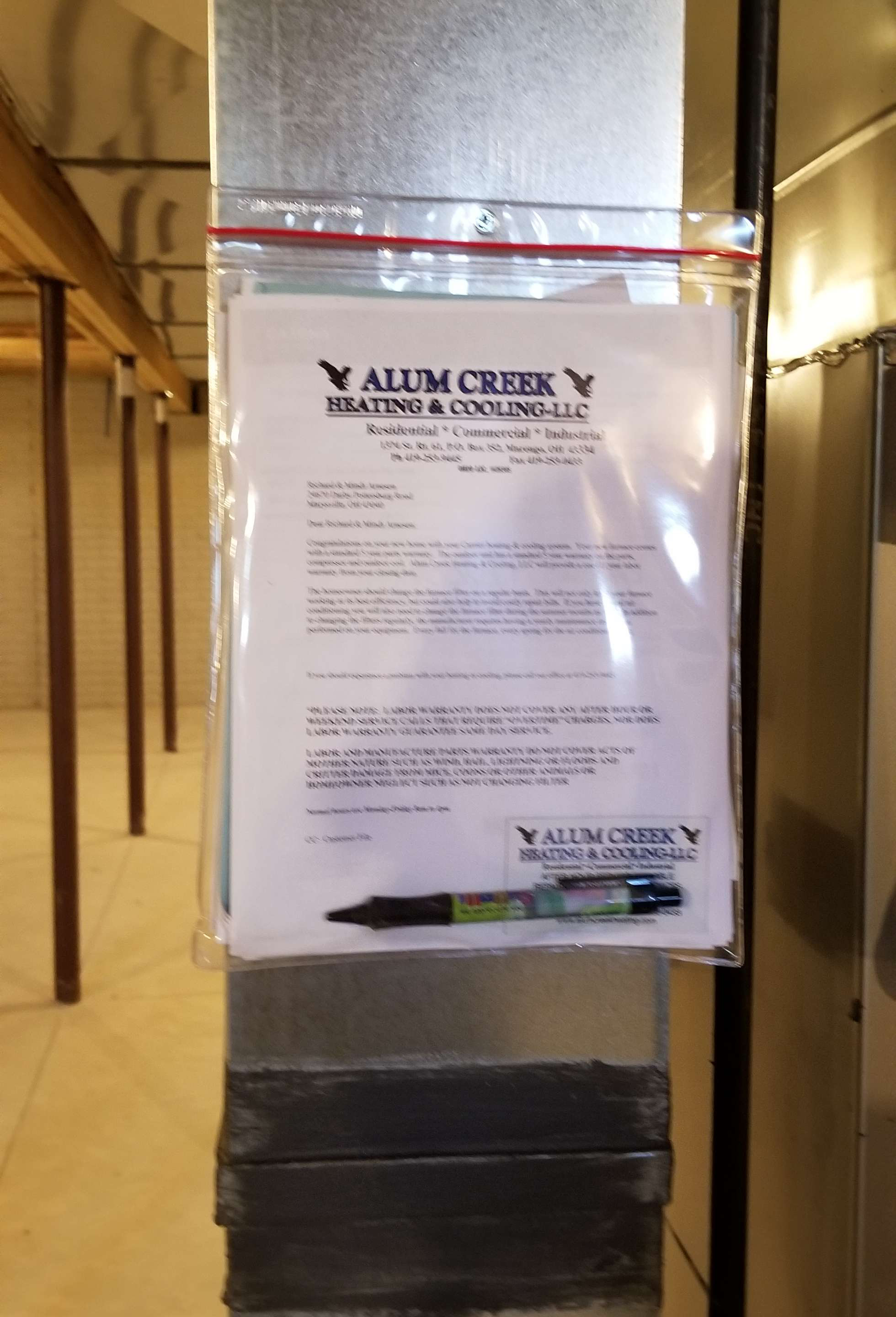 A few other details were finished upstairs such as the exhaust fan covers:

Now on to the work we did today with the Ethernet cabling.  Richard had to strip the cables, separate all the different threads, put them together in the connectors in a specific pattern and then put covers over the wires. The wire we chose to buy was shielded Cat 6 cable.  It is thick and definitely takes some work to get to the 8 wires and then to get all the wires properly separated as some of them are twisted together and punch them down into the connectors in the right order for your installation. I then went behind Richard and snapped the connectors (called keystones) into the switch plate cover and screwed them into the wall while he moved on to the next cable.  We have various different configurations and not all of them could we complete today because the electricians still have to finish a couple other things, but we got the vast majority of the work done today (12 of 13 keystones, 8 of 11 wall plates).  It’s a very detailed process and takes a while to do each one.  This network won’t be configured until we install our network rack, with the network switch, PDU and punch panel and get all the wires connected to those pieces.  We can’t do that until after flooring though as we don’t want it to be in the way.

Here’s a keystone Cat 6 connector, currently hanging out of the master bedroom wall until the electricians finish off the coax cable that is housed in the same electrical box.

And double connections in the guest room/office closet where we plan to house a couple peripherals:

Creative kid’s room is getting a jack, but as of now we don’t ever have a plan to make it live.  I don’t believe children should have privacy when it comes to the internet, so whenever he wants to use a computer it will be the one at the homeschool room jack (which I just realized I failed to take a picture of) or a tablet used via wifi while he’s downstairs.  But for resale value alone or if the room ever gets changed around, we added a connection.

One of two multi connection outlets in the great room.  We cannot fully complete it because the electricians have to finish out the coax cable before we can plug it into the back of this outlet and then push all the cabling into the wall and add the switch plate cover. Both the TV connection above the fireplace and the wall to the right of the fireplace have these jacks with their own ethernet cables and HDMI cables run in between the two connections so we can hide all of our game systems/DVR/etc in future built ins to the right of the fireplace but have them connected through the wall to the TV.  I did not want to have cables strewn across the stone fireplace.  The jack behind the TV will not have COAX as any signal coming from a COAX will go through a DVR or cable box anyway and not be directly plugged into the TV.  We currently can’t get cable at our house, but we do use an antenna with a COAX connector going into a stand alone DVR currently and will be attempted to have the same set up there.  If we can’t get good enough signal for routine streaming we will have to resort to DSL. 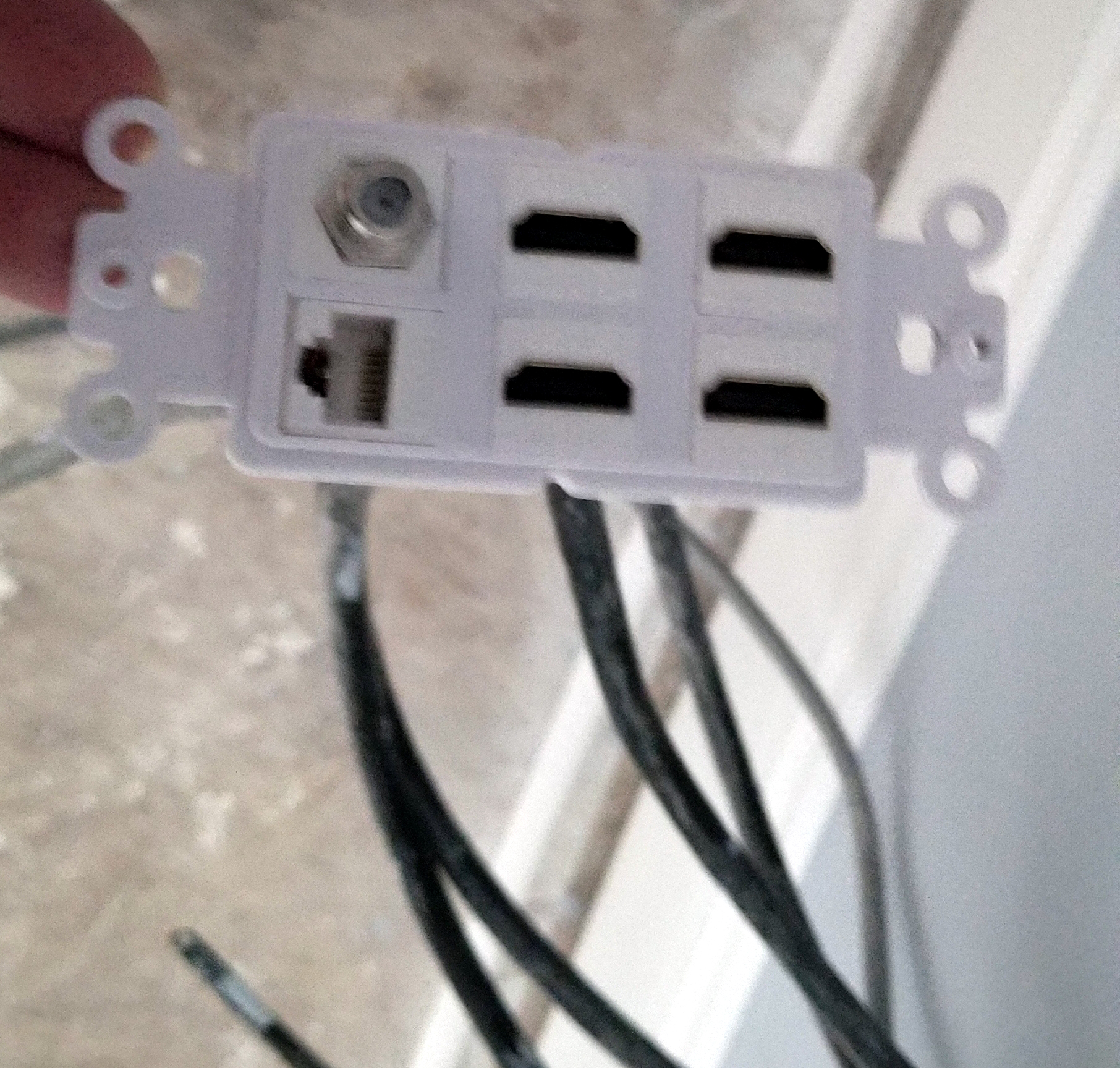 Creative Kid even got a little lesson on how it’s done:

So that was what we did today.  I went around making notes of things we need to have touched up or other things we noticed for our talk with our field manager next week and in general tried to keep CK out of Richard’s way when he was doing this delicate, detailed work.  We are taking tomorrow ‘off’ from doing house stuff but will be going back out there on Monday to do a few tiny things and drop off some supplies for the electricians and leave them a few notes.

One of which is about a Ethernet wire that was supposed to be put in one of our island cabinets by the ‘rough electric’ electricians but was not put in.  There was a note written on the beam below the cabinet in the basement saying to check with us about where we wanted it located in the cabinet but no one ever did.  Thankfully we caught it.  The finish electricians said they could add it where it’s supposed to be, but it hasn’t been done yet and it was our understanding from our FM before he went on vacation that countertops were supposed to be done on Tuesday.  So we want the electricians to do that installation first because an outlet box will not be able to be run to that area of the cabinet (it’s closed off from the rest of the cabinet) after the countertops go in.  I’m praying it all works out timing wise and that the electricians see my note in time!