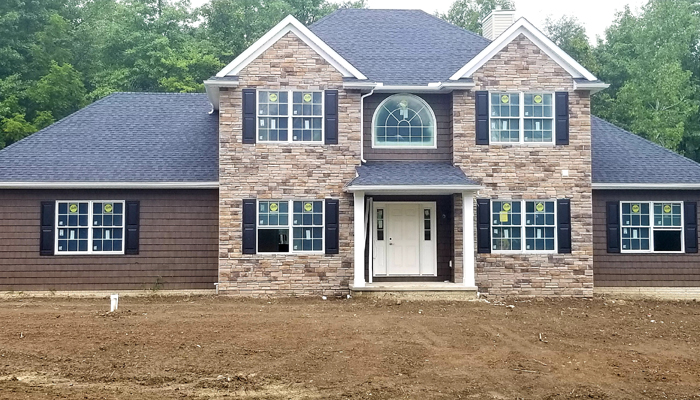 We decided to go back out to the house yesterday, day 120, because we had a few things we wanted to do in the house that we couldn’t do while the painters were inside the day before. I took a few more photos while I was there of some of the trim painting they were doing and as you can see they have blocked off the stairwell while the stain dried.  I had planned to walk the whole house taking note of any subfloor that squeaked so we can get it taken care of before the floor coverings are installed but the upstairs would have to wait.  I plan to be there for a half day on Wednesday when the electricians start doing final electric, so hopefully I can walk the upstairs floors then. 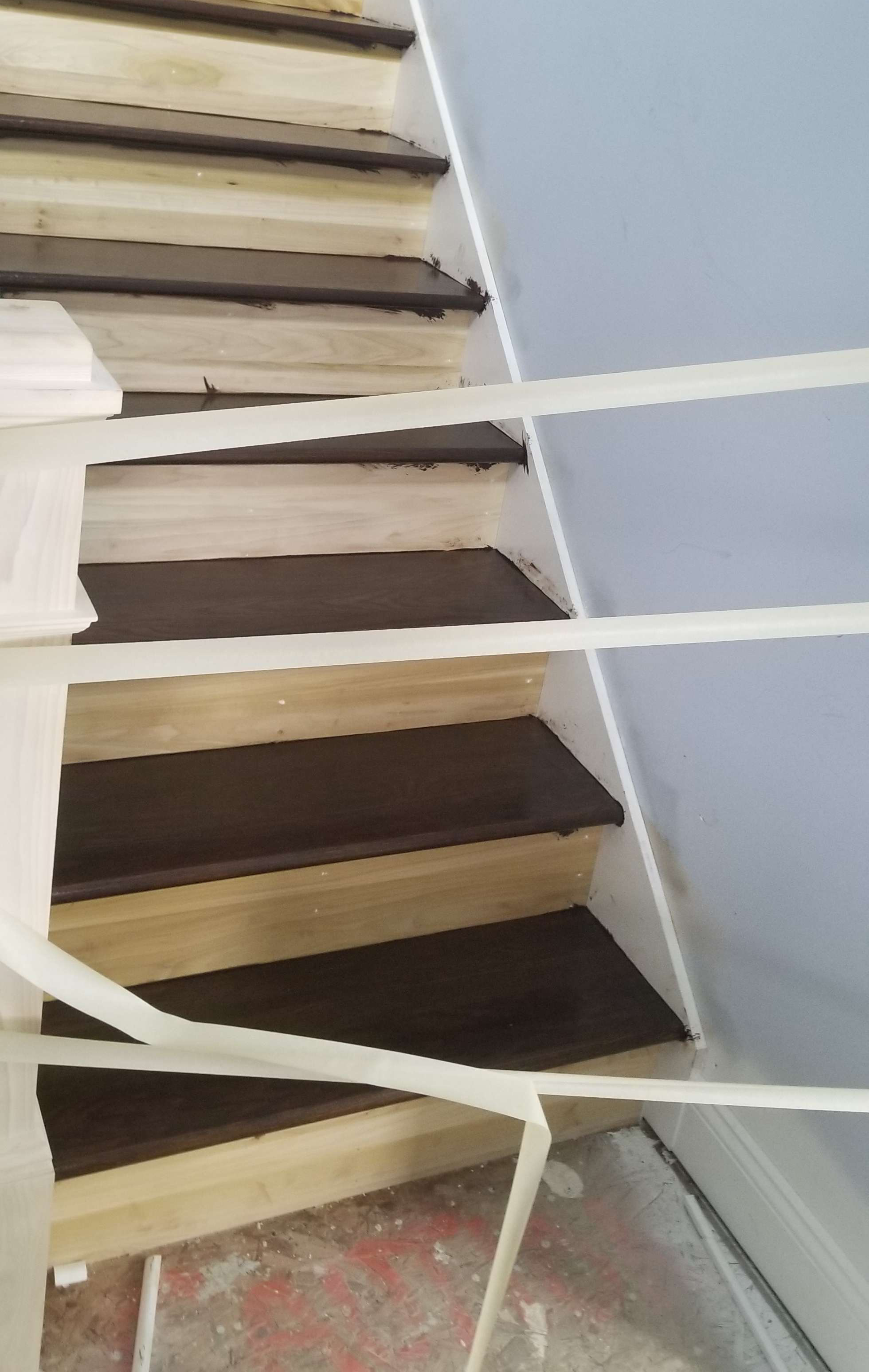 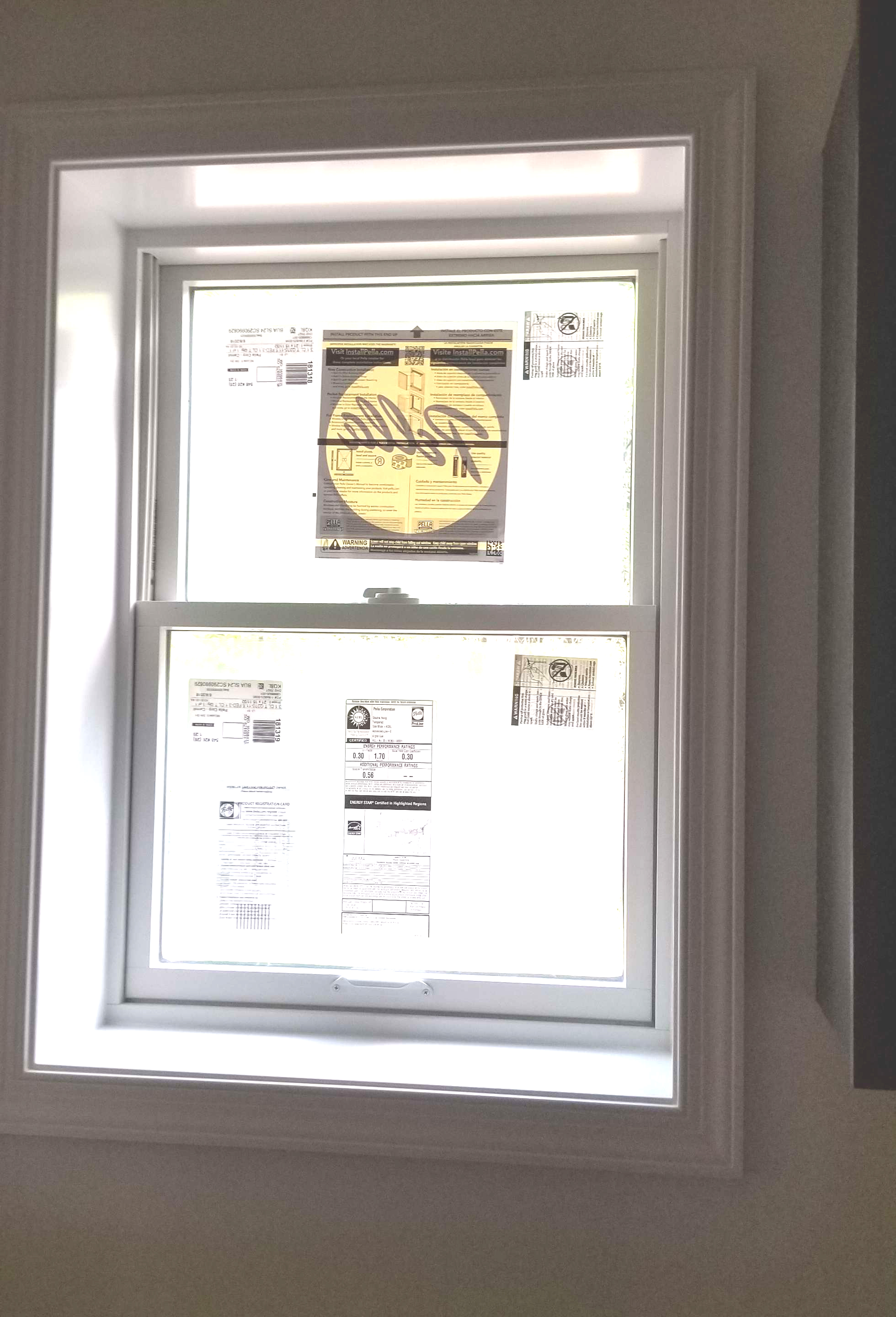 You can see in this photo that they have been patching over all the nail holes again where the drywall came together to make sure they get a nice smooth final coat.  We have noted where there are some gouges in the walls in a few areas that have not been patched yet that we will be checking on after the final coat is done, but I am sure they will catch them when the start painting that final coat on.

We also took note of the doors that have been sprayed out.  Of course the pocket doors had to be painted while on the frame.

We also took a new photo of the outside now that the stone work is complete.  After they paint the front door and the porch columns, the downspouts will have to be reattached before we can get a final complete photo of the front of the house.

While we were there we took note of a few things we missed after the end of the trim was done.  For one the door stops were installed and while they took the stop itself off when they sprayed the baseboards, they did spray the hardware the holds it, so they blend in well and you don’t notice the hardware on the wall.  While I was checking out the cabinets, I found extra parts including all the handles that would be needed for the bathroom cabinet that didn’t get handles.  I assume they just didn’t get around to putting those handles on that day and since they have to come back later for another issue, I figure they plan to put them in then.

I also noticed this piece of wood that was put in where the dishwasher will go.  I must have missed it that day, but I assume it is there to make sure the cabinets are spaced properly until the countertop is set.

We’re getting near the end of all of this process and I’m ready to be out of this crazy period in our lives.  Don’t get me wrong, things could have went much worse.  We’ve read some building horror stories that would make some people too scared to even think about going down this path, but in the end I think we will be much happier having got exactly what *we* wanted.  The alternative was settling for a home that we would have needed to remodel and having just been through the small remodel in our old home to get in ready for sale, we really didn’t want to go through a major renovation.  And truly everything we contemplated that was on the market was overpriced right now and never really felt right…either the house or the setting were just not what we were looking for and everything that came close were snatched up so quickly your head would spin.

Up until now we’ve been focused on what we needed to do to get into the house.  In fact we were so overwhelmed earlier in the year we made the conscious decision to solely focus on the bare minimum we needed to do to move in.  I made a list of all of those things…things we needed to do, things we needed to purchase, etc…and it’s worked out well.  Now we have started to transition to the long list of things we need to do after we move.  We sold or got rid of a lot of things before we sold our house (yet we still have 3 storage units!) and so a lot of things will stay in boxes until we replace furniture.  We had a good $5,000 worth of Elfa shelving from The Container Store that we used at the last house that we put in storage, but we’ve decided we don’t want open shelving anymore, so there will literally be no place to put a lot of things at the beginning.  As I told my sister-in-law today, I think we’re going to be spending a lot of money at Ikea in the next few months to find good storage options that don’t break the bank, especially for the homeschool room, the gaming loft and my craft studio.

So now I am off to start making lists.  I am a list maker and love lists so this is actually fun for me!  It helps me stay organized and not let things fall through the cracks.  First up?  Figuring out what window coverings we want and for which windows.  Bedrooms must have some sort of window covering and I would want the front of the house to match, but I am really contemplating going without any window coverings for a while for the great room and sun room and see how it goes.  The back butts up against our woods so there shouldn’t be any privacy concerns and I really want as much lighting in those rooms as possible.