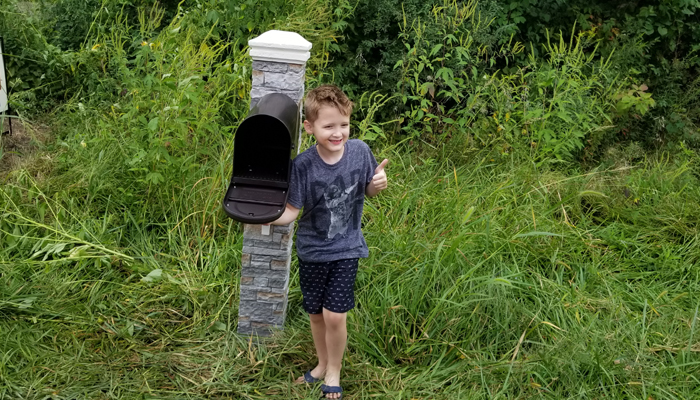 Today we headed out to the build to install our mailbox.  This seems like a simple task, right?  Not so fast.  We were not putting in a simple mailbox.  I wanted something to reflect the house, so I found a cast stone mailbox post cover kit, then I bought an oversized mailbox since we tend to get lots of small deliveries and a no dig post hole anchor since we can’t cement it in the ground per county rules.  We planned to go to breakfast, purchase the actual 4 x 4 pressure treated post at Home Depot and head to the build.

We didn’t really get going as quickly as we had liked and breakfast took a bit longer as well.  Even the Home Depot trip took longer than expected as we had to wait a bit behind another big order before we could get the post cut down to size.  By the time we got out there it was getting ready to rain, but we started getting the pieces put together.  At Home Depot we found a better no dig post hole anchor than the one I found on Amazon, so we decided to use that one instead.  Richard was trying to get our multi-tool with the weed eater up and running but you could tell the storm was coming fast so we decided not to worry about the weeds for now and instead try to get the post in before the rain started.

Then the guy from the propane company we have chosen called and asked when he could come out and see the set up since we want to get the propane in next week so it will all be in place by the time a mechanical inspection is done the following week.  So we told him we were there and to come on out.  He got there about 10 minutes later and we were in the middle of trying to pound in the post so we left it to go show him around.  Of course the skies opened up and by the time we were done talking with him and getting things squared away, we looked at the radar and decided to wait for a few minutes to see if there was a break but eventually Richard decided to keep pounding on it out in the rain.

What we found was by following the directions, we thoroughly tore up the top of the wood post.  At first I thought we could still use that piece but then I realized it was just too splinter to salvage.  Thankfully we kept the piece we had cut off the post and it was only a couple of inches shorter, so we thought it would work and we would just stop pounding in the post a couple of inches away from the ground.  It was a 30″ spike so we didn’t think this would make a huge difference in stability.

So we get the post cover kit out and found that we needed a masonry drill bit to finish putting it together, so we packed our stuff back up and headed to the closest hardware store to get it and some silicone caulk that was needed for the post cap that wasn’t included.  I meant originally to pull out the instructions before we left but because we were kind of sluggish this morning, it never happened.  By the time we got the items we needed and got back to the land, the rain had subsided.  So after drilling and screwing and more drilling and more screwing and adjusting and caulking….this is what you get.  We think it turned out quite nice. 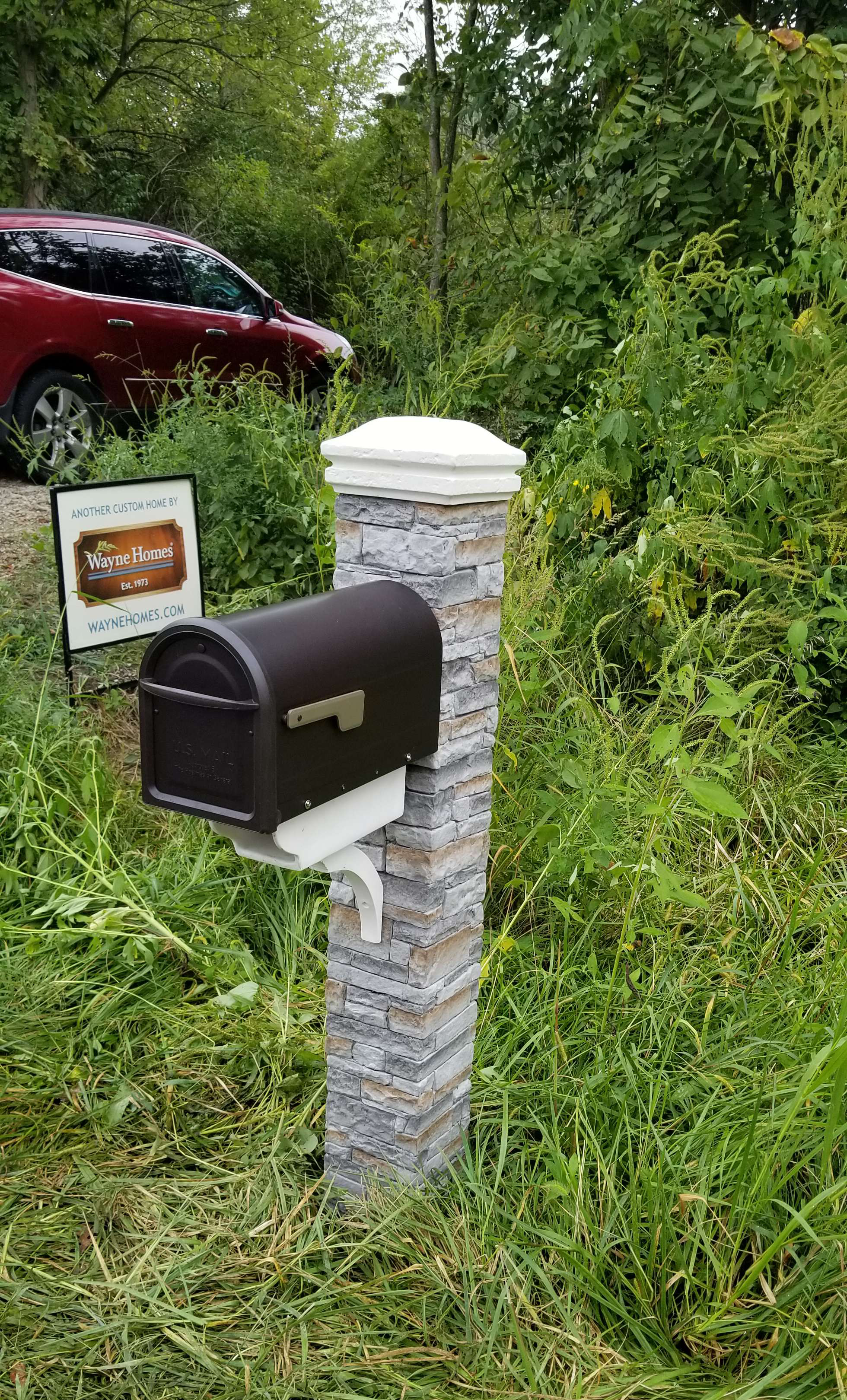 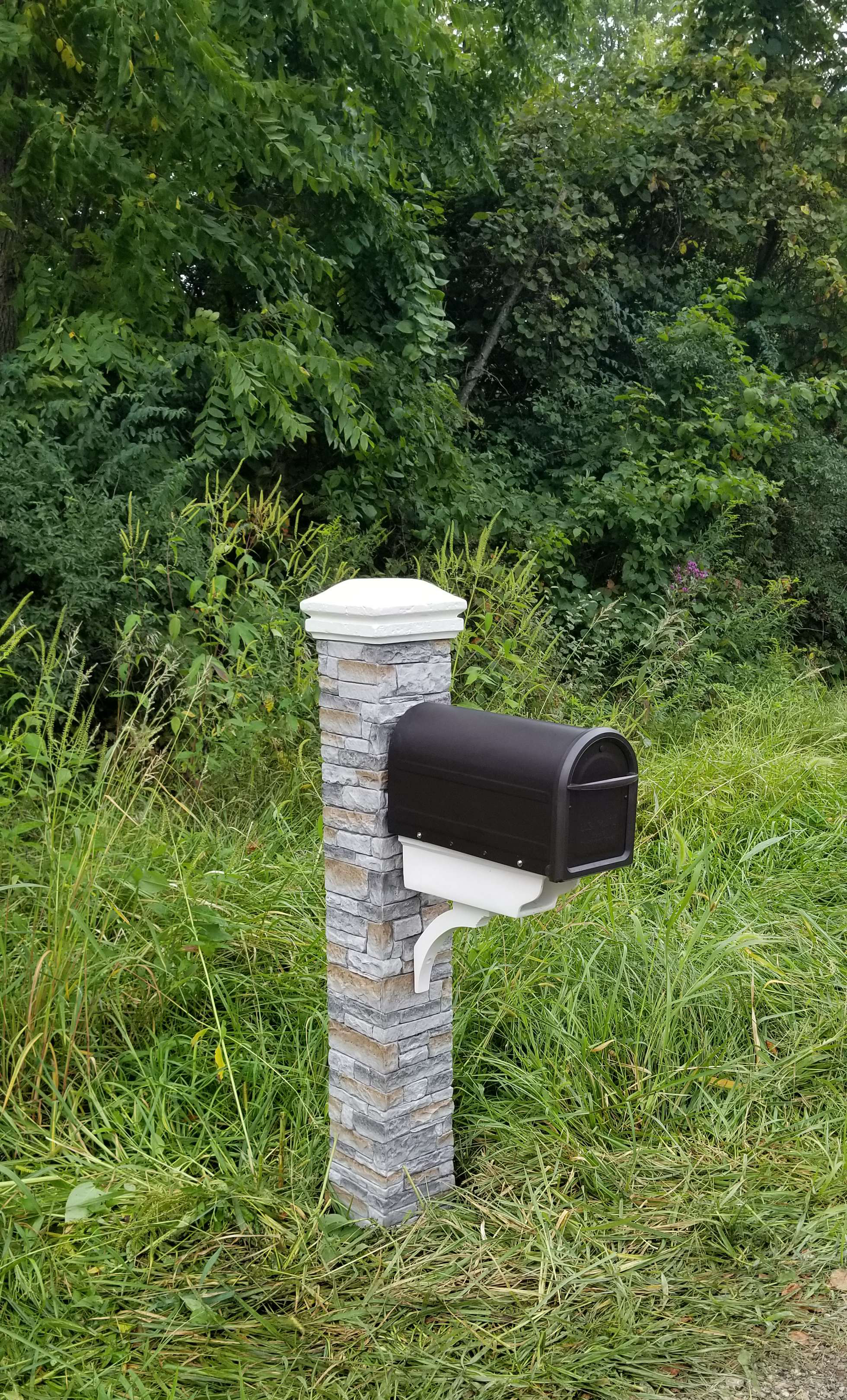 We need to decide what numbers we are going to get for it and how we’re going to attach them.  I like the reflective number signs out there but I am unsure if I can actually attach those to this post. I also don’t know if I would like the look of those big green or blue letter signs with this post, so I’m leaning towards trying to find some sticky reflective letters for the side mailbox itself.  Of course we never did get trimming done with the rain and the series of unfortunate events today, but we will put that on our list for another day.

While we were there, the full paint crew (5 or 6 people) were spraying the trim and staining the stairs and railing.  We went in to take a few pics before getting out of their way and one of the guys, who seemed to be the leader of the crew, was showing me how they mixed the stain to match the cabinets by using a spare board of the cabinet and let me tell you it’s pretty spot on.  Here’s the photos I took while we were out there. 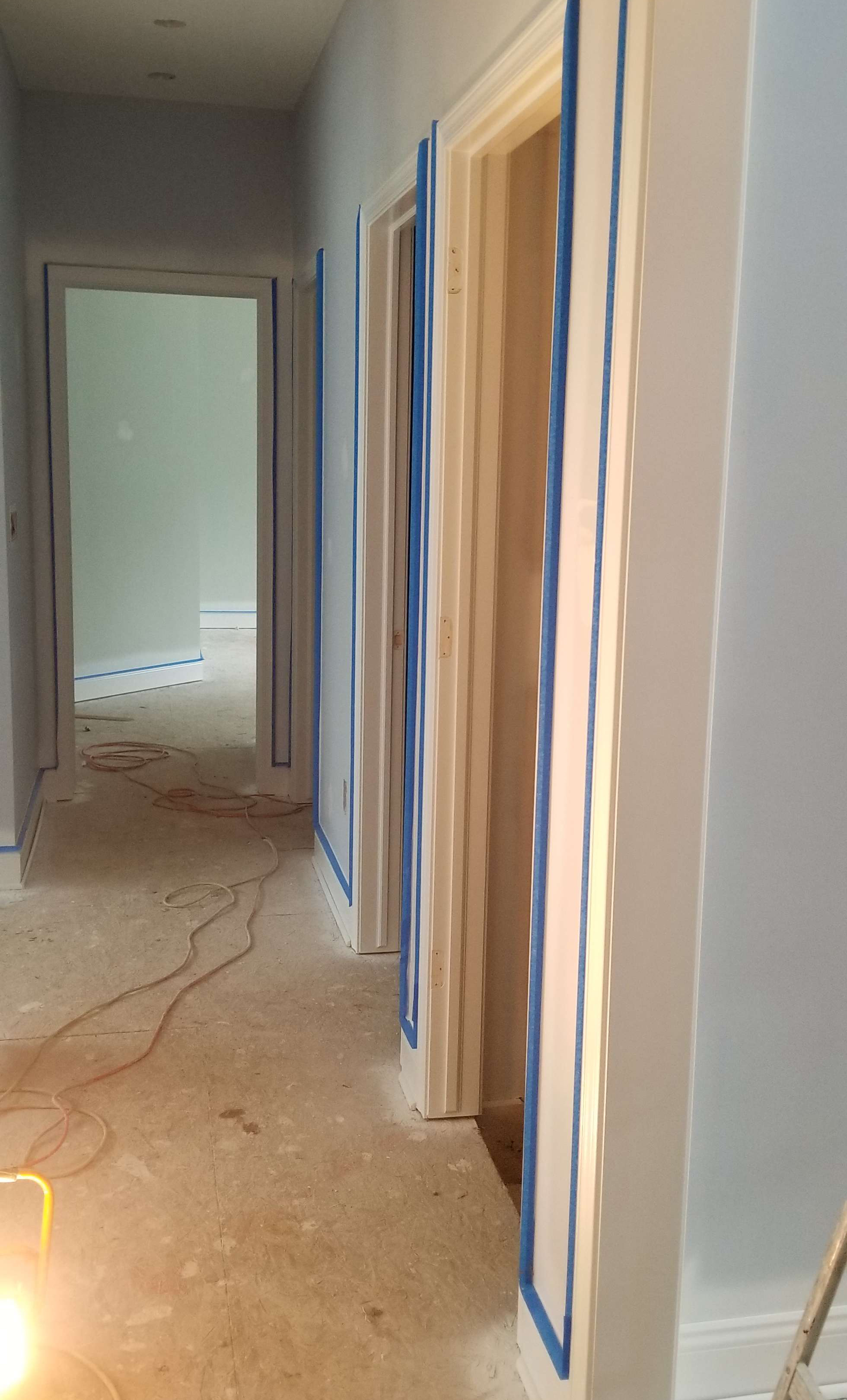 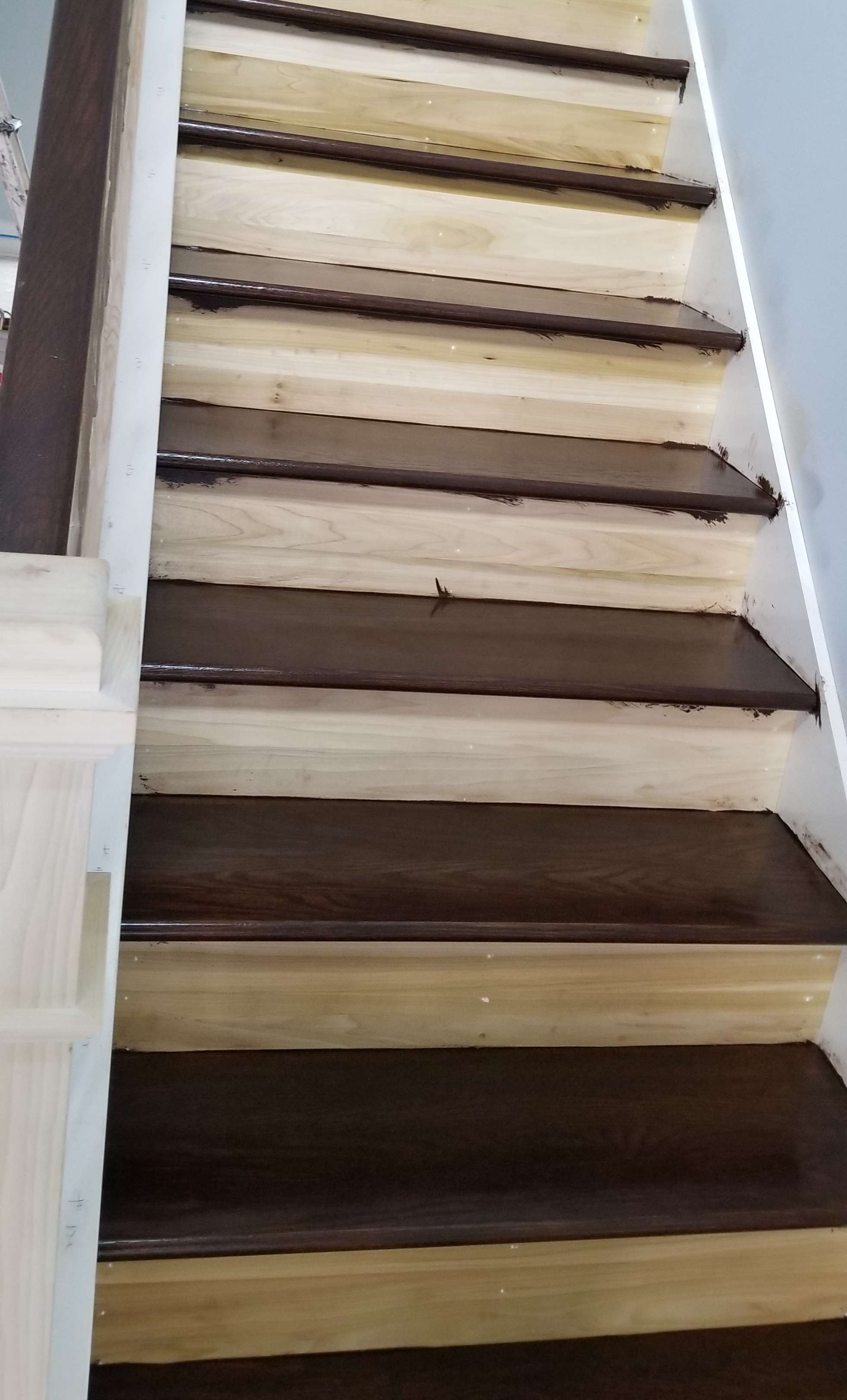 So that’s all I took.  We didn’t stay in the house long as they were very busy, some of the paint was wet (didn’t want any accidents with Creative Kid touching anything he wasn’t supposed to) and the fumes were pretty noxious.  My guess is they have another 2 days worth of work because they have to do all the final paint on the walls themselves now that they’ve done trim and stairs. They spray trim and stain first because they can paint over any of the over spray, they tape over areas where they absolutely can’t over spray.  It sounded like they were going to be coming back out on Wednesday or Thursday to do the painting outside on the porch area because of the rain today…at least that is what I think was said.  I have trouble sometimes deciphering accents plus CK was talking at the same time, all I know for sure was the words Wednesday or Thursday was said and he was gesturing towards the porch/front door area. ?

Sadly, the stone guys never showed up on Friday.  We let our FM know before he left on vacation, so hopefully he was able to light a fire under them. Propane though will be going in next week.  We ended up going with an above ground lease for now because the options for underground tanks right now are limited and very costly.  Less companies are doing them and we just don’t want to deal with it right now to be honest, so we’re punting on it until sometime next year when we can reevaluate and have time to shop around more.

Our personal list of ‘we must do this before we move in’ is getting much smaller.  We have an appointment set up for DSL to run their lines to the house, we got the mailbox done today, we have all our lighting and dimmer switches ready to go for the electrician on Wednesday, we purchased our water softener and our FM said he could help us get that installed if need be.  The major things left on *our* list is purchasing bathroom mirrors (I didn’t want builder grade frameless mirrors), deciding on a trash service company and getting that set up, sanitizing the well once we have all the plumbing fixtures in and changing our insurance because we no longer want the company we currently use as our permanent home owners insurance after we move in.

Now the list for after we move in?  Let’s not talk about how long that one is…one hurdle at a time.