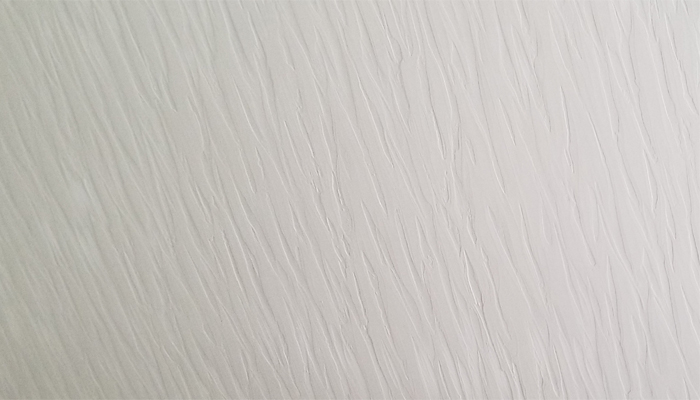 So I haven’t posted much this week and it’s not that nothing has been happening at the house, it’s that what is happening at the house is barely visible.  All of this week they have been doing drywall mudding and taping.  It’s not a sexy job, but a quality one is important.  Unfortunately since you have to let it dry, sand, repeat, it takes quite a while to complete while nothing else can really be done.

We did notice one day when we dropped by that the barn beam mantle for over the stone fireplace had arrived.  Ironically we passed our Field Manager on the road while we were going to the house after he had just dropped it off.

We also noticed that some additional shingles were dropped off and that some changes were made to this area where the porch roof meets the stone towers.  We haven’t really asked why this is taking a while to complete, but obviously there is still some fine tuning going on before the stone can be finished.

So our Field Manger called Richard on Friday and gave us a rough timeline of what is going to happen in the following weeks leading up to our closing and moving in, the first of which was ceiling texture would be done today.  We were already going to be heading out there this weekend to put up the TV mount over the fireplace so that they will be able to do the stone around it, but this gave us a good reason to go out today.

We LOVE the ceiling texture.  The texture on the ceiling of our old house is called a stomp.  It is what is most prevalent around this area and after staring at it for almost 17 years we HATED it.  Plus it was super hard to match if you ever have to have work done that requires you to take out a portion of your ceiling (which we did).  For those of you unfamiliar with a stomp ceiling it looks like this. 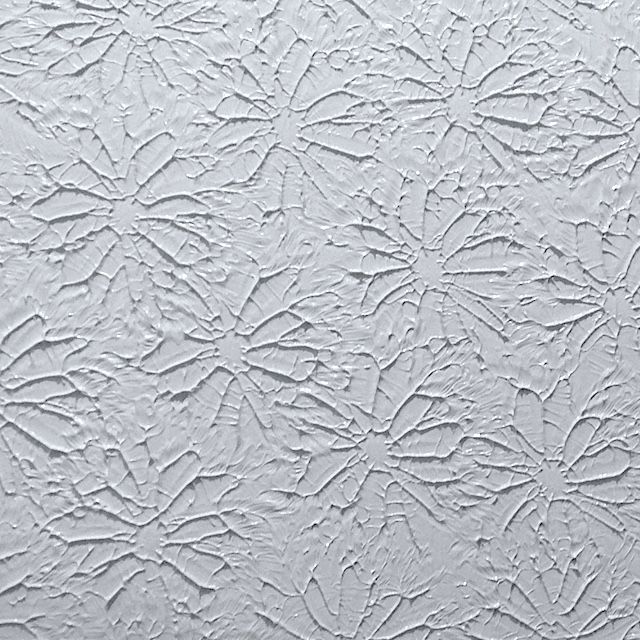 All those little peeks and points hanging down collect dust, they’re hard to clean without knocking that stuff off at times and into your eyes and in general we just hate the look.  We originally wanted flat ceilings and every builder we went to said they don’t do smooth ceilings.  In my opinion it’s probably harder to make them look completely smooth and home owners are probably rather picky, so they just don’t want to do them.  So we did the next best thing, we paid to upgrade from the stomp ceiling to a tree bark texture.

Unfortunately on these bigger pictures I don’t think you can really see the texture because the light washes it out. 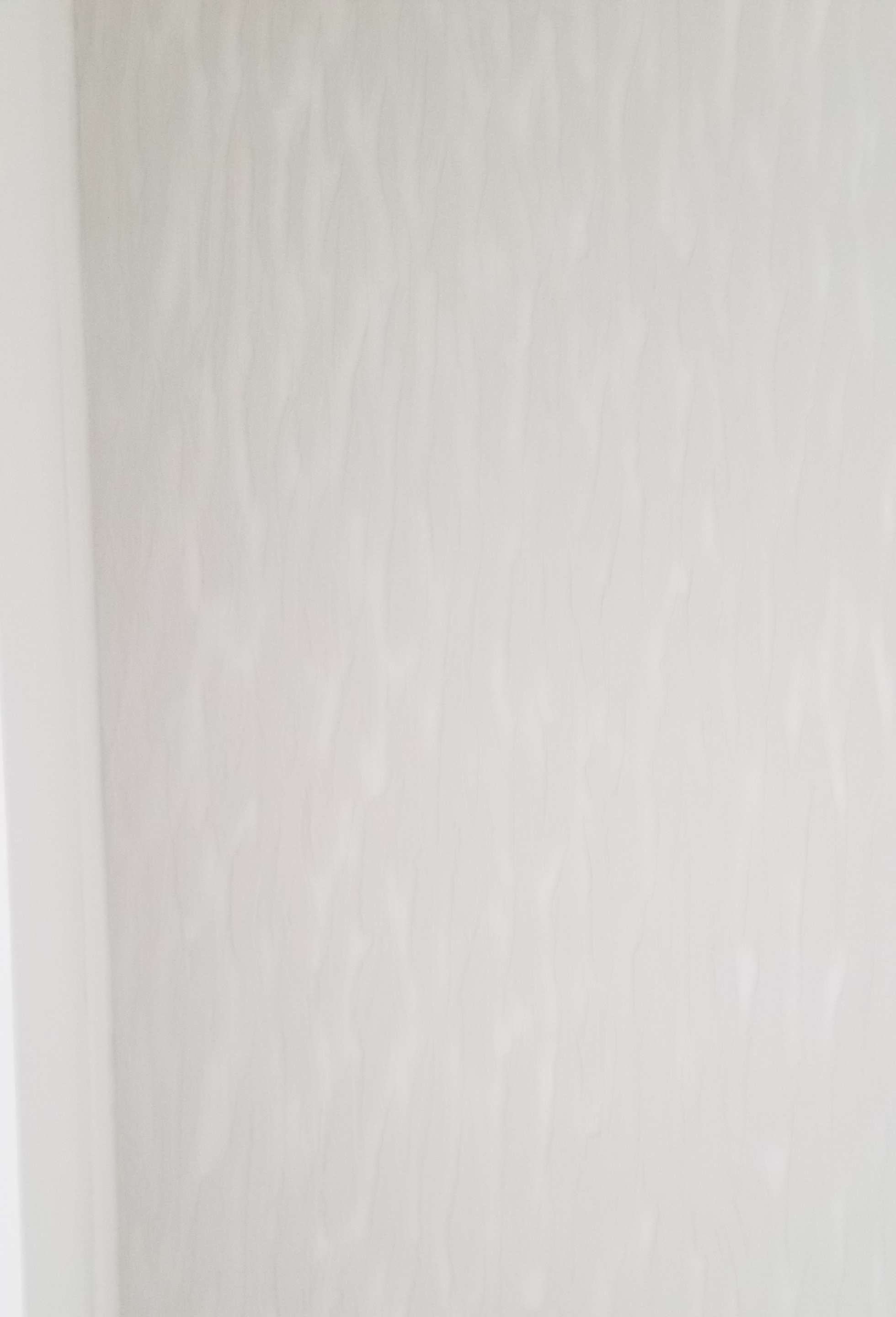 Here’s a couple more zoomed in, so you can really see the look.

We are digging it!  No pointy areas hanging down, it’s fairly smooth but with a bit of flair, it’s totally going to fit with our house in front of the woods with the tree bark look and Richard actually says he likes it better than if we would have gotten the smooth ceilings we were originally desiring.  Seriously, don’t discount how the little things make a space feel…this totally looks more sophisticated and eye appealing that the stomp texture. I felt guilty at first for paying over $800 just to do an upgrade on the look of the ceiling…now I will say, it was TOTALLY worth it.

And finally, here’s the reason we went today. 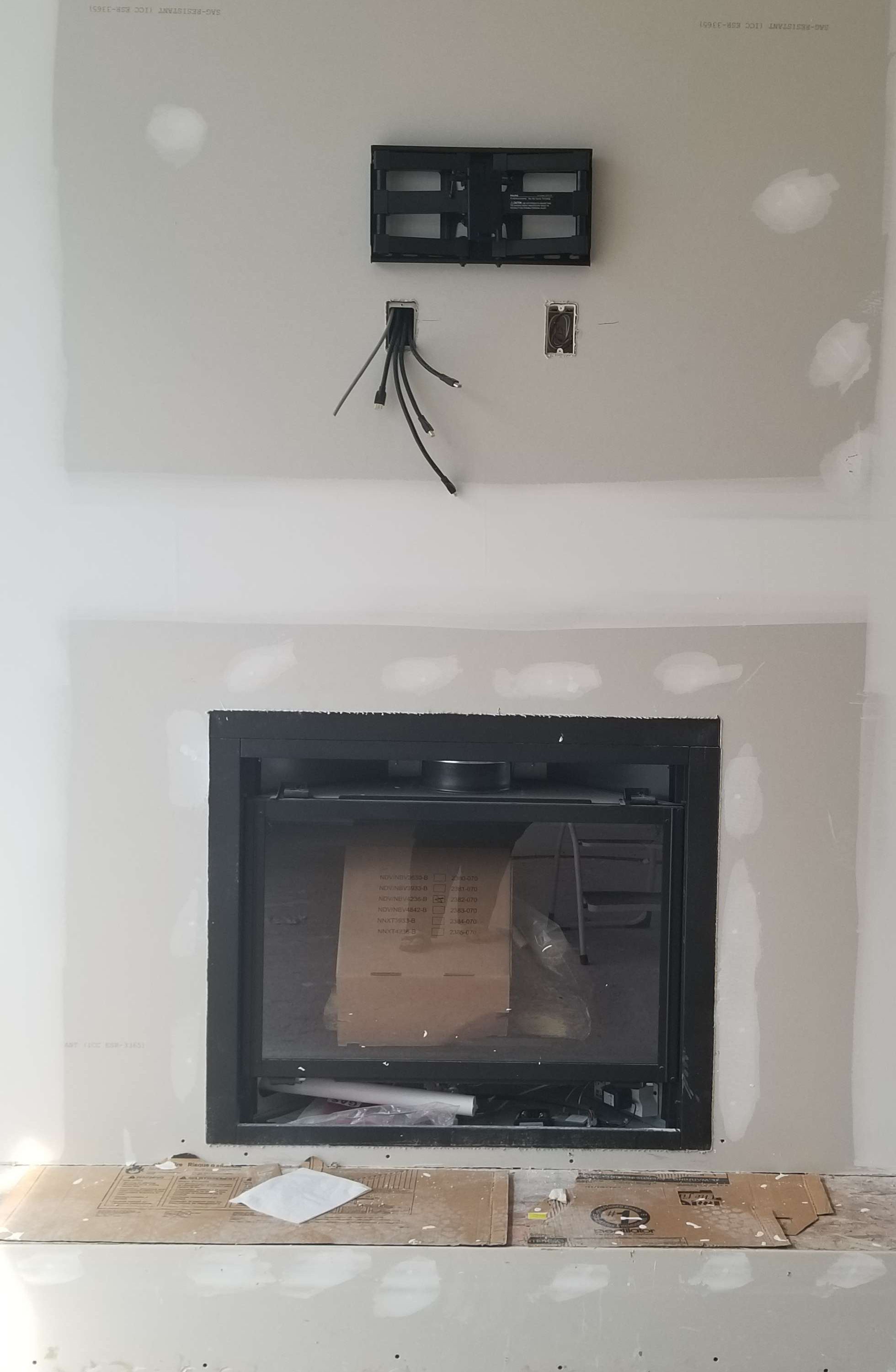 We need to go back and tighten one lag bolt because it went in at a slight angle and we could no longer get the socket wrench over it once it butted up to the frame, but it’s a really solid mount, heavy duty and can hold up to a 70″ TV.  They will now be able to do the stone work around the mount and electric/media boxes.  Speaking of which, let me give you a timeline of what our FM said is coming up:

8/20–Fireplace stonework and stone half wall

Obviously these could change if there is a snag somewhere and this doesn’t lay out all the things being done, but this an outline of what we’re looking at.  On our end we made some more decisions and purchased more things this week that we need before we can move in.  We bought specialty switch plates, our ethernet rack, patch panel and PDU(sorry geek speak if you don’t know networking), and a mailbox, mailbox post, and specialty mailbox post installer since we can’t concrete the post in via county rules.  We also have our propane tank on order, started the process to have line run for DSL since that is the only internet we can get at the new house and sent info to the postmaster to get our new address added to the USPS registry.

Towards the end of last week we heard from our well driller about putting in a water softener.  We had already planned to put in a water softener so we put into our Wayne Homes contract to have plumbing lines all set up for a water softener we would purchase.  Our water came back at 25….like well beyond simply hard, so the water softener is a must, not just for better taste in drinking water but to stop our pipes, fixtures and appliances from developing horrible amounts of scale.

Our well driller had sent us a estimate to install a 45,000 gpm water softener and a small pamphlet from the water softener company about the model.  We hadn’t had a chance to really dig into it, but the call reminded us that we needed to do it soon.  After a lot of research we found that the water softener they wanted to put in was from a smaller company where we really couldn’t get good info on reliability or real world reviews.  Plus their cost with installation seemed to be rather high considering we had already paid to have the plumbing lines run in our Wayne contract.

In the end we have found a well reviewed water softener that we can buy through Amazon for a great price and we will be contacting the plumbing contractor on our house to find out what the cost would be if we have them install it.  I guarantee it will be massively cheaper than the cost the well driller quoted us.  I think a lot of people probably just go with what they are offering because it’s easiest, but I want to get the best product for my money and I don’t want to waste money on doing what is easy.

Our ‘must buy to move in’ list is getting smaller and smaller, but we have started moving on to things we need to DO to move in and not just buy and to that end next week I will begin packing the apartment.  After a rather boring week at the build, there will be lost of exciting updates next week!