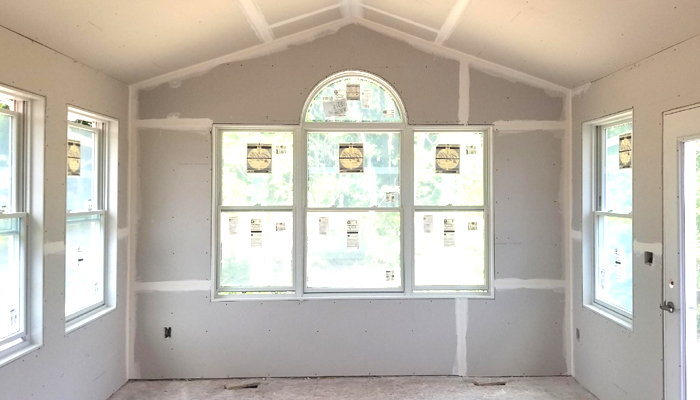 The drywall crew was back today to start the process of taping/mudding/sanding.  It’s so funny how the little details really make such a difference in how you see the space.  Without the taping, it still looked so unfinished, but the mudding and taping really makes it start looking like real rooms.

First thing’s first…window screens were dropped off and left in the garage.

And now for some photos of the drywall work done today.

Well that’s it for today.  We spent some family time this weekend while mixing in some house decisions we needed to make.  I’m giving in and letting Creative Kid paint his room red.  We originally told CK that he could paint his room whatever color he wanted, but at the time he was totally set on another Minecraft room and I assumed we’d be using some natural tones for the wall weather it be green for grass, brown for dirt or some color of stone.

Over the past 6 months he’s been all over the map with what he wanted to do, but then he saw a Lego bedroom that was done with red walls and from then on he wanted a red walled Lego bedroom.  *SIGH*  Red doesn’t really flow with the other colors in the house nor is it easy to paint over when he gets to be a teenager and inevitably wants a more mature bedroom.  But he seems pretty set on it and it’s what we promised, so he’s going to get it.  He wants some Ninjago wall decals and other lego touches and of course he still has all of his Minecraft items which I guess can still ‘go’ well because of the Minecraft Legos.  I’m trying to do some searches for things to help bring it all together.

I’m really looking forward to decorating all the rooms.  It’s going to take some time to get it all done, but that’s definitely the fun stuff for me!