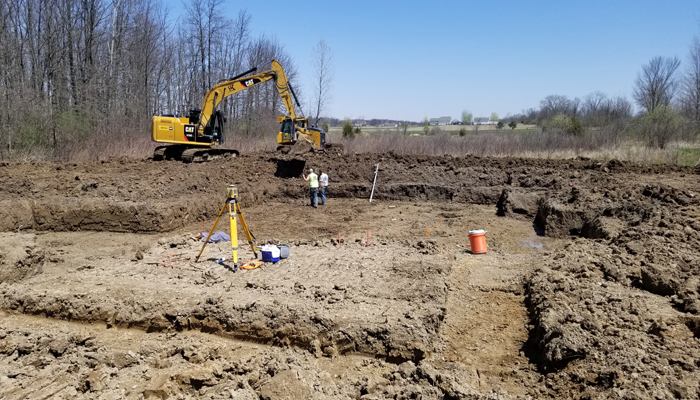 The day has finally arrived!  Dig Day is here! I know it’s frustrating with delays and permit slowness and other things we had to accomplish to get to this day, but I have to remember that we only got serious about finishing up our improvements on our old house to prepare to sell around this time last year.  Then we went through a remodel, several handymen fixing odds and ends and our own sweat equity before we could put our old house on the market.

We then took only a month to decide on a builder and sign a contract!  I’ve been looking at other blogs and talking to other people and it seems this is fast for most people, but when we have a goal and set our mind to it we’re full steam ahead. While our house was on the market we bought land for the new build and then our house finally went under contract and we had to scramble to do final fix requests from the new buyers, celebrate Christmas with our little guy and move right after the first of the year before my husband left on a business trip that took him away through most of the end of January.

We then had to finalize the encroachment issue with the neighbors, finalize our loan, start cutting down a bunch of trees and brush and get all of our permits and the electric and driveway in before we could get to this point.  This stuff took longer than we anticipated I think, but honestly the weather did not cooperate this winter and our land stayed pretty wet which made it hard to do the clearing we needed to accomplish, so it seems like the last 3 months have crept by….but…then I sit back and look at everything that has happened in the last year.

We did a whole heck of a lot in about one year’s time and we should be proud of that.  If you would have told me that a year ago we would be breaking ground on our dream home, I would have told you it just wasn’t possible.  We didn’t think we would be able to put the old house on the market until now!

So we were told by the Field Manager that workers would be on the land at 7:30, but that no one would be able to really talk to us and they wouldn’t be breaking ground that early.  That instead all we would see is people running around marking things and verifying the dig boundaries, etc.  He said we could probably arrive at 8:30 to see the beginning of actual dig work.  We had planned to be there then or a little early, but a couple small things slowed us down and we ended up there a few minutes after 8:30 and they had just started digging.

We came into the driveway and saw this new page put on one the original Wayne Homes sign.  I thought it was a nice touch that it has a welcome message for us at the bottom. 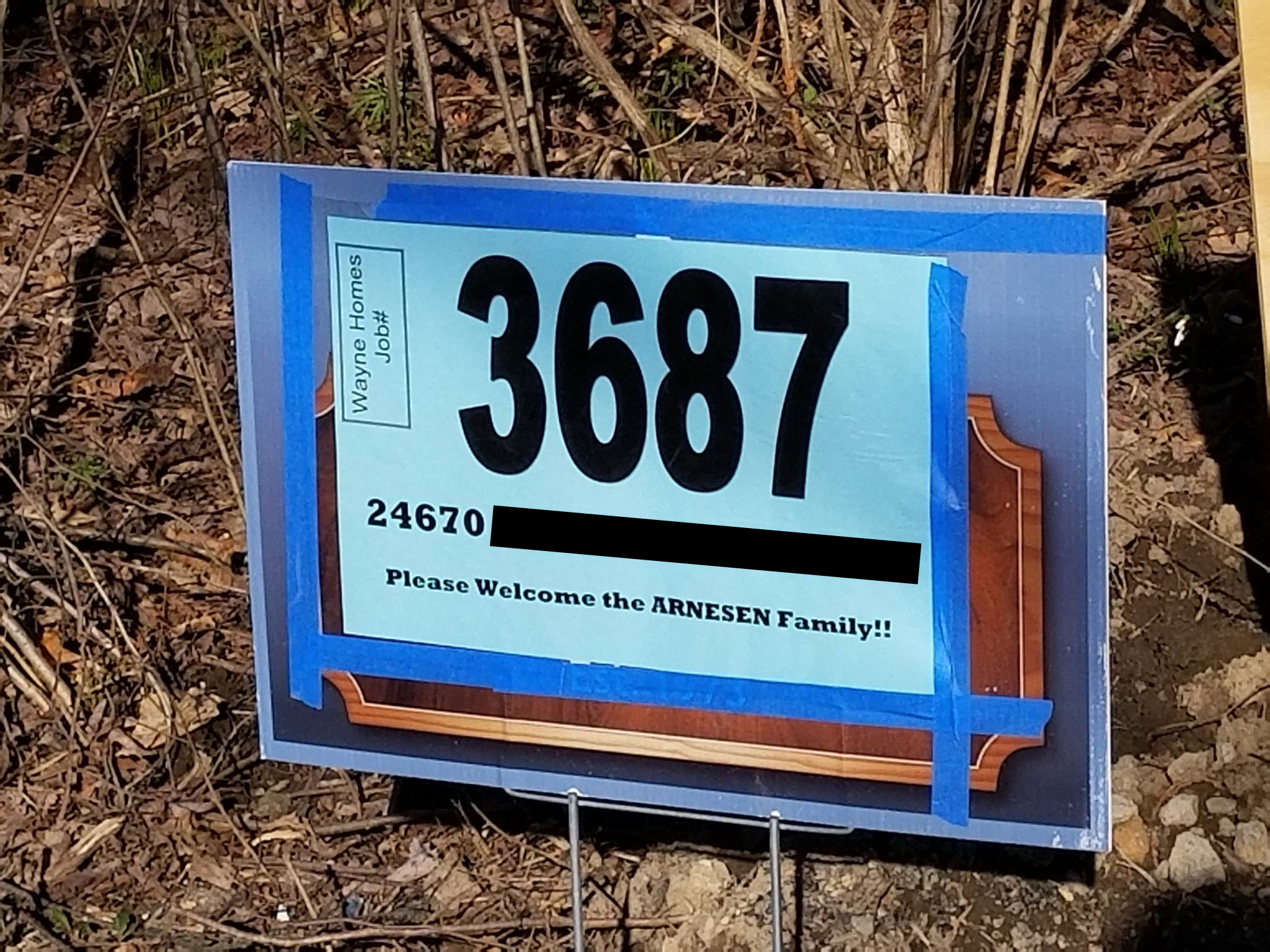 We also had a new Wayne Homes sign on the other side of the driveway. 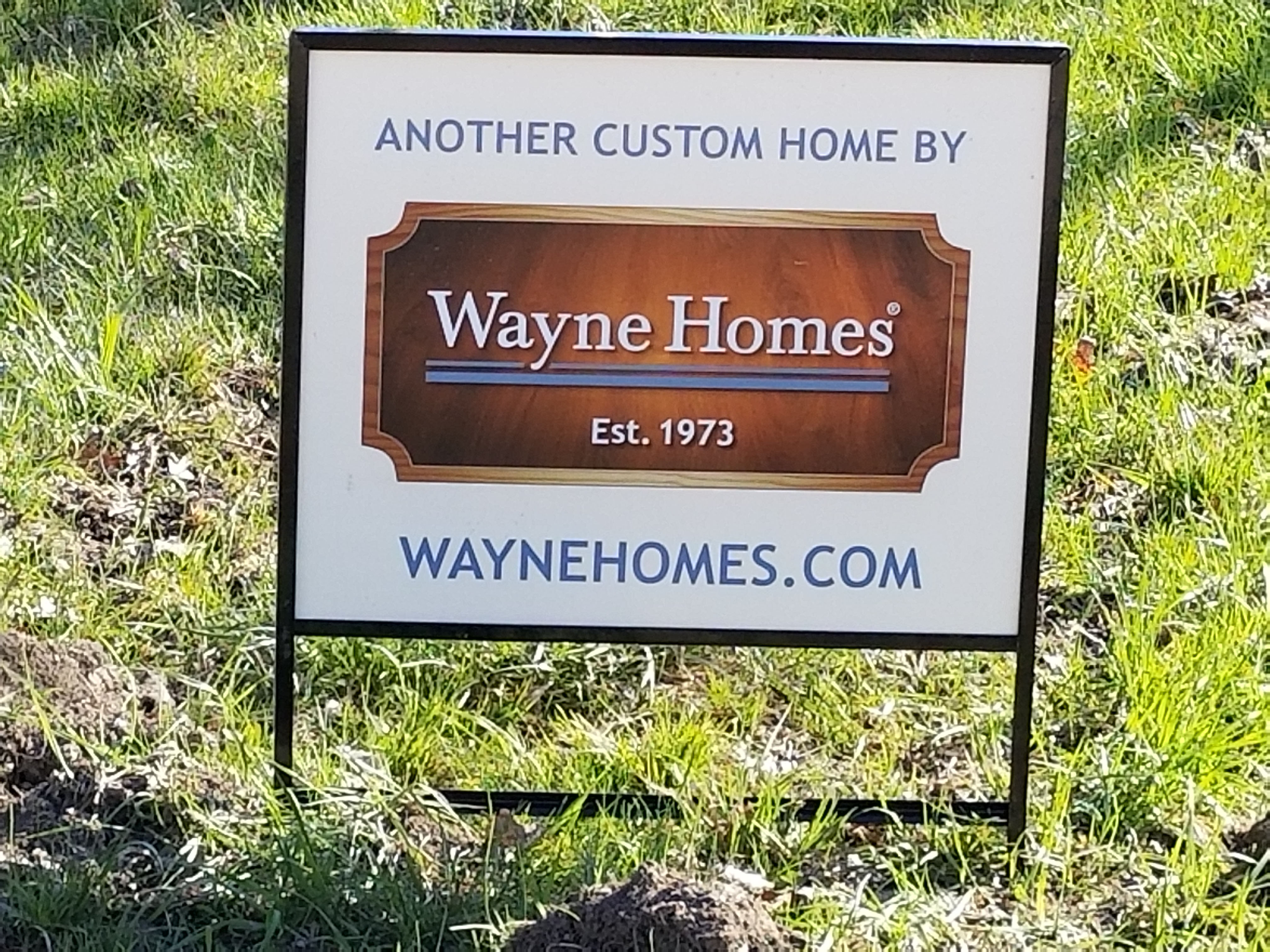 We passed our Field Manager on the road when we were coming in and were told by the excavator that he had to run to another job site close by and would be back.  The excavator also told us that on his very first scoop, he hit field tile.  When I asked if we would have to relocate it, he said it didn’t seem to be going to anywhere but back through our woods from the front of the neighbor’s property.  He had previously told us he thought the reason we were having a back up of water on one side was because that neighbor doesn’t have a culvert under their driveway.  For now he crushed the tile and pulled it out and I don’t think we will have to relocate it.  Here are a few pics of the first few hours of excavation. 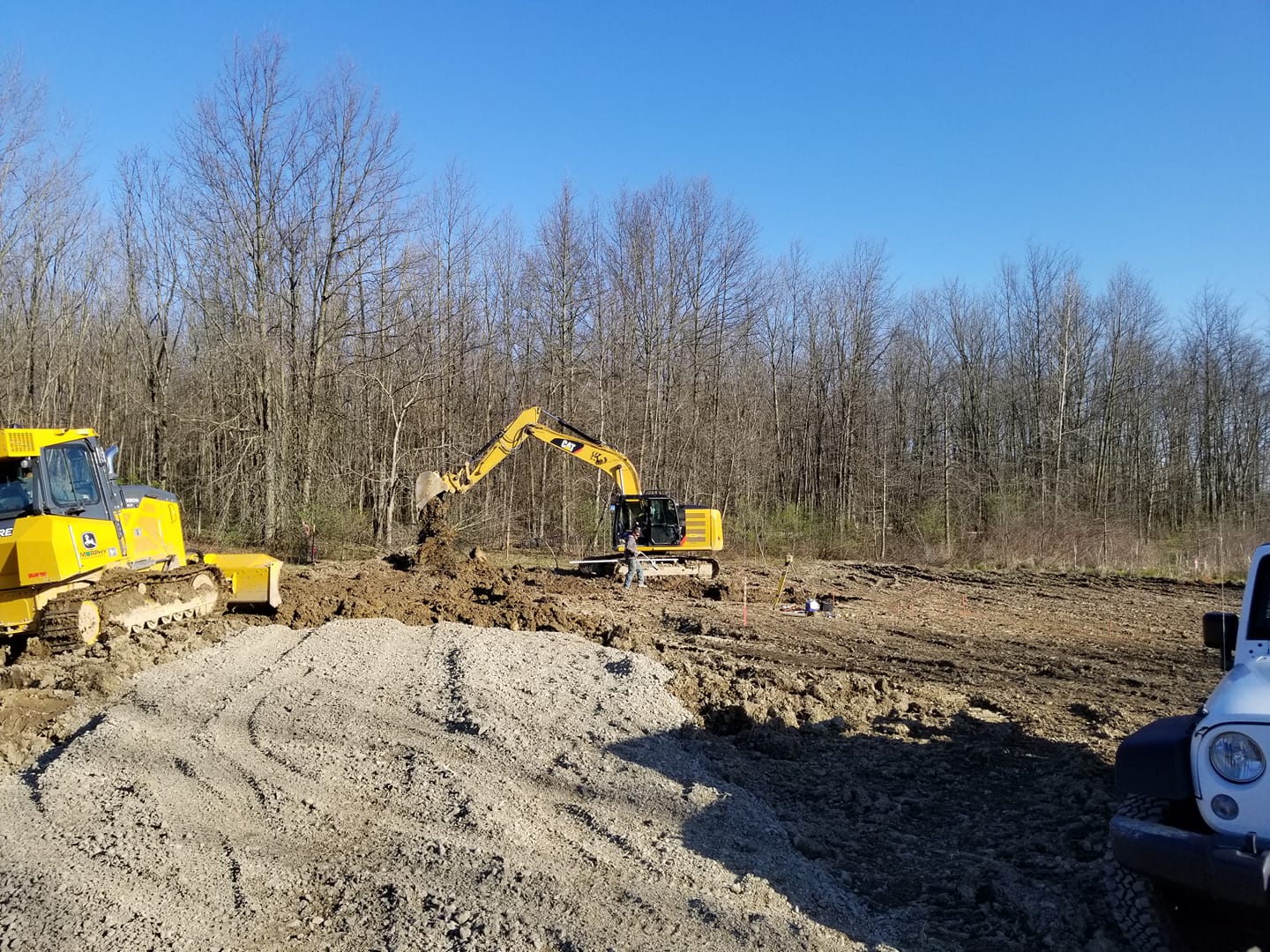 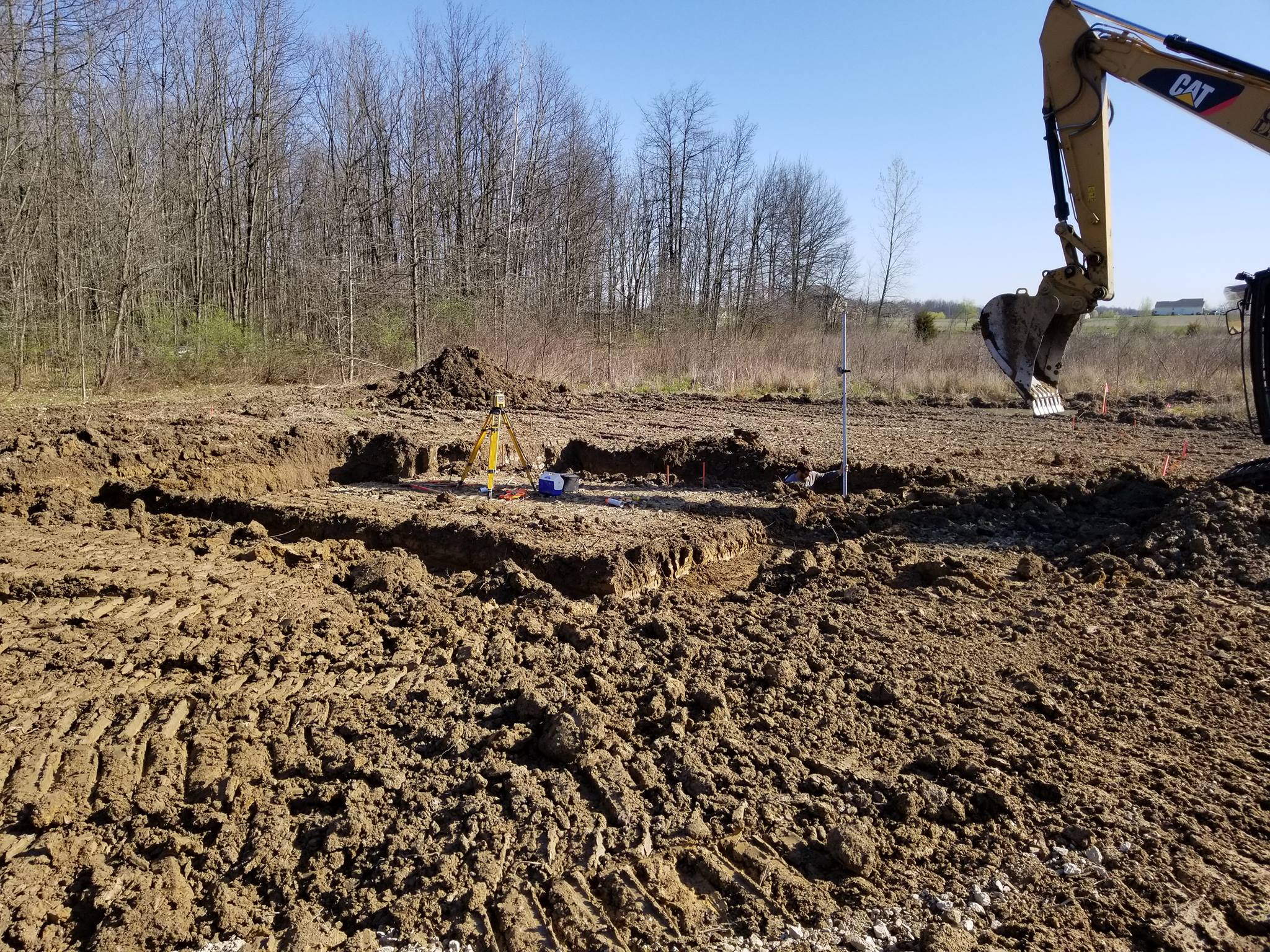 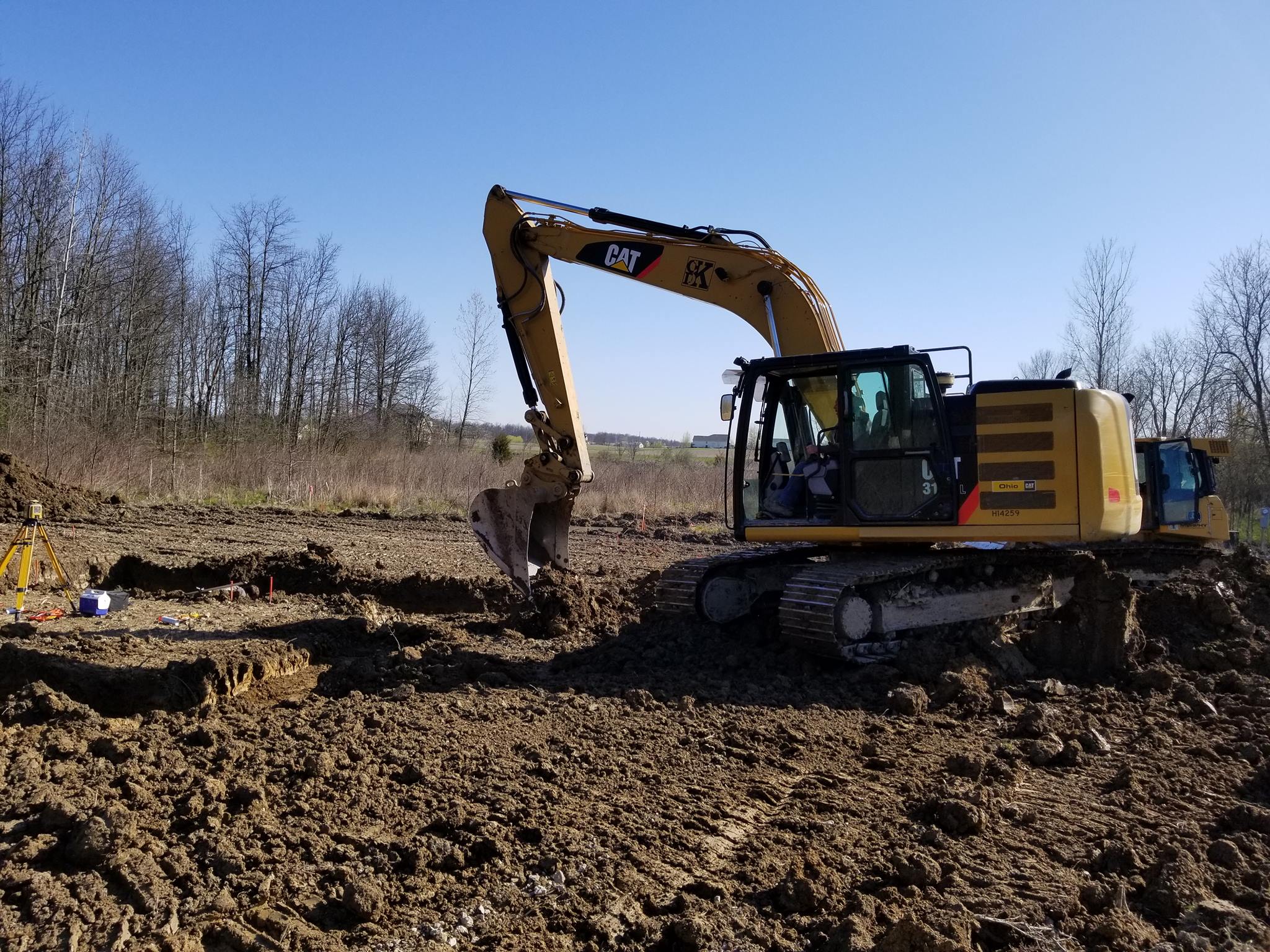 While they were digging we decided to get some of our own work done and we took loppers and started cutting more paths through the front tree line.  We’re trying to get a lot of the honeysuckle cut away so you will be able to see the front of the house through the trees.  Then we will decide what front trees we are keeping and what we want to get rid of.  I would like to be able to see the house from the road, but I also want some trees remaining and a border at both property lines.   During this work, Creative Kid really wanted to help, but our loppers are so heavy duty they were too heavy for him to hold at an appropriate level and I was afraid they would fall, sharp edges down, right onto his foot.  We promised him when we went to lunch, we would go to Home Depot and get him an appropriate sized pair of loppers and some work gloves for him to help with clearing paths.

Around ten o’clock, this truck showed up.  This may seem like a little thing, but this will be so helpful to us when we want to go out and work on the land for prolonged periods of time. 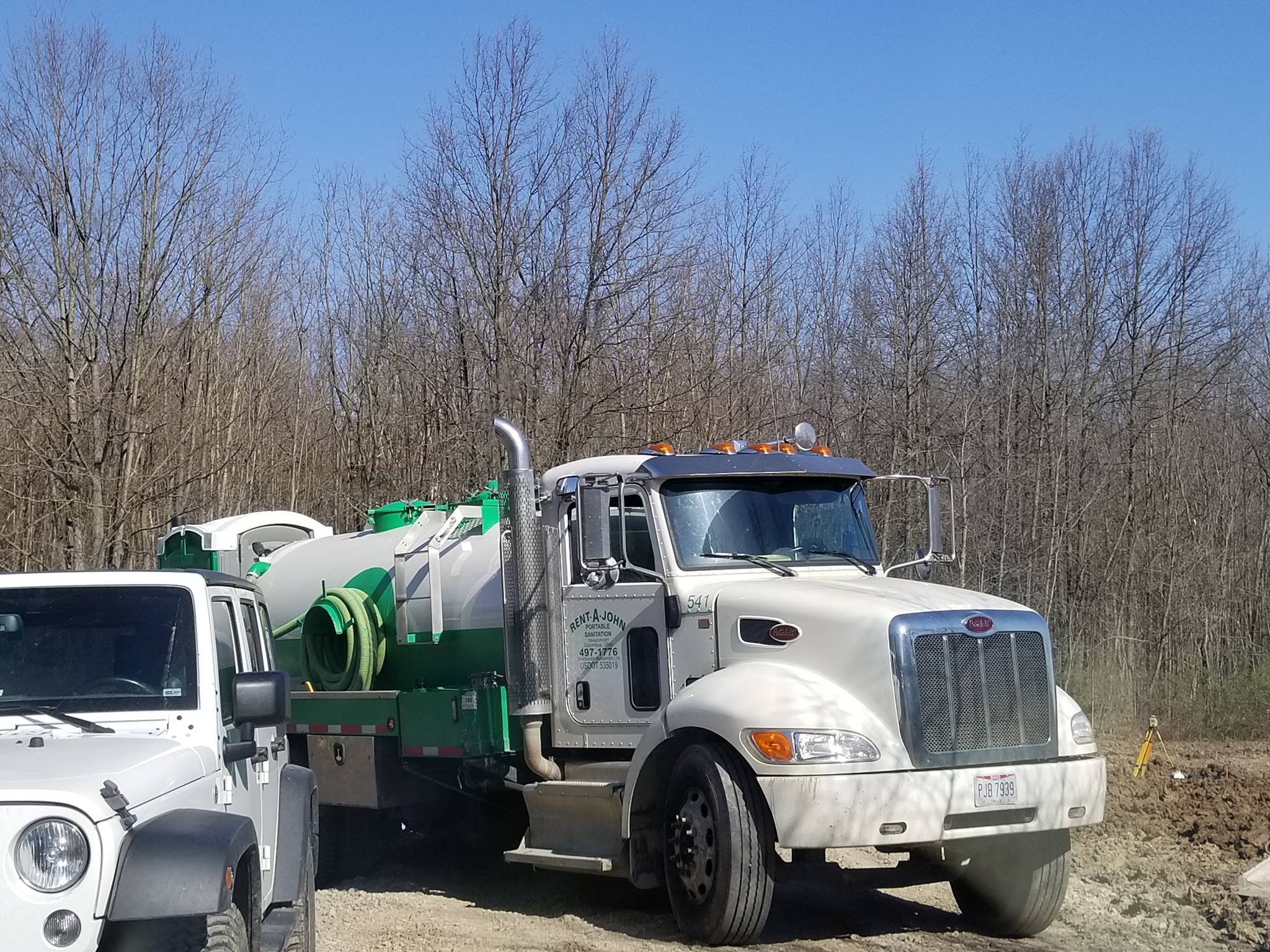 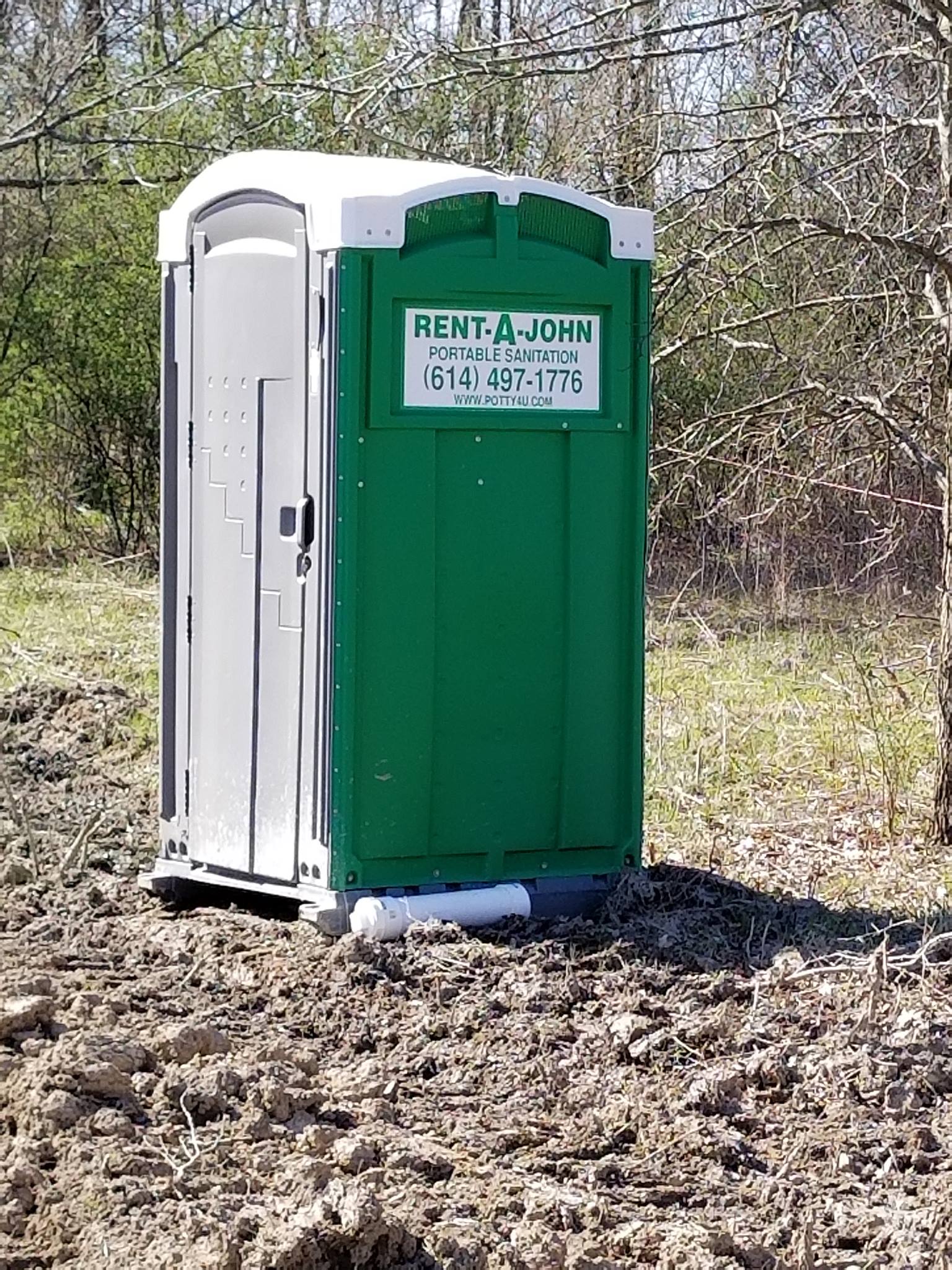 Shortly after the port a potty arrived, our Field Manager showed back up.  We touched base with him, but there really wasn’t a lot to say.  He went to get a physical copy of our building permit and put it in that white tube on the ground by the port a potty for now since there really isn’t any place to post it.  He also put some instructions in there with some of our blueprints for the people who will pour the footers tomorrow.  He said the contractor who does the basement poured wall forms may not be as long to get to our job as we originally thought, so that was a positive.  He of course told us we could stay as long as we liked, but he had to go to a closing after lunch so he had to get going.  He had touched base with the excavation contractor while he was there and seemed pleased with how it all looked. 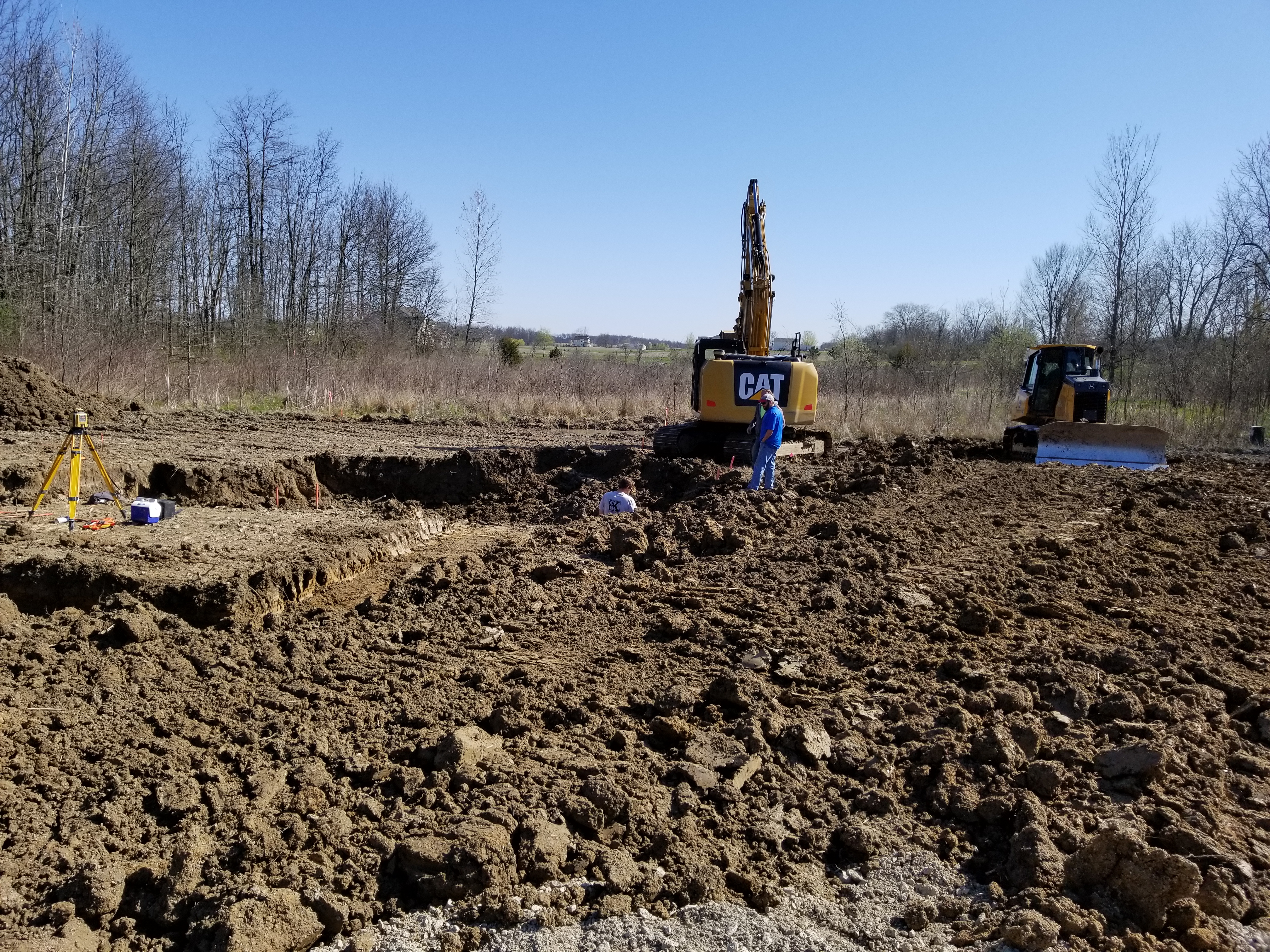 Shortly after he left, we too decided to leave for lunch.  We had planned to go check out a convenience store/gas station about 5-10 minutes away because we are still trying to get the lay of the land and figure out what places will be closest once we move in if we need something.  It was a good size little store that reminded me of a small IGA.  From there we went to lunch in Marysville and then headed to Home Depot before going back to the land.  As you can see from these pictures, Creative Kid was very happy that we could find some loppers he could handle and some small garden gloves. 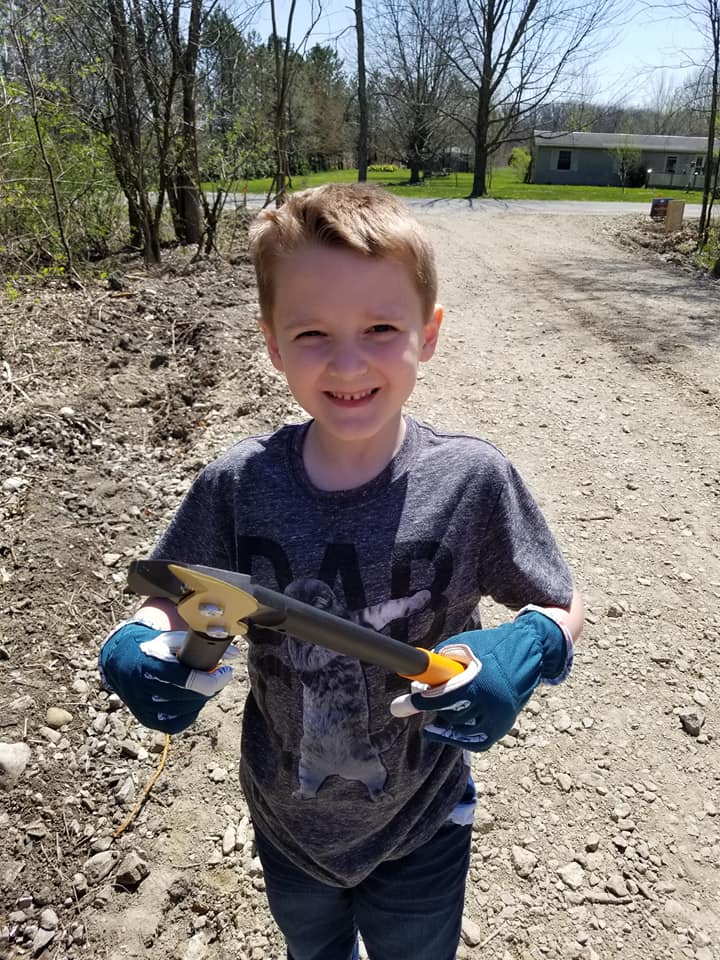 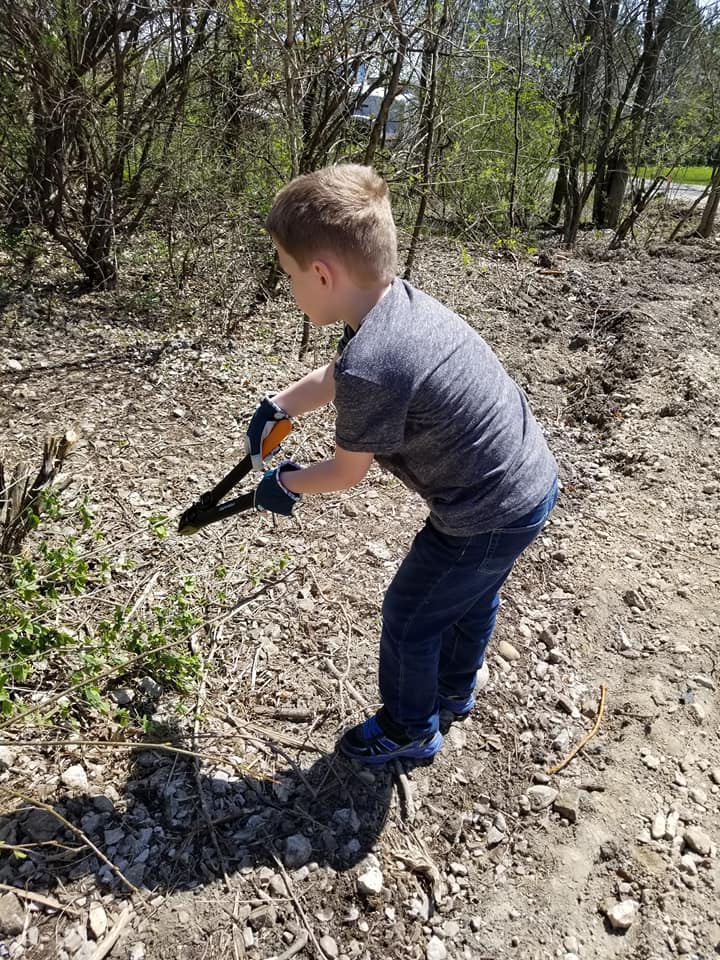 We had been gone for about 2 hours and when we came back they were getting pretty close to being finished.  We also were surprised at how much extra our excavation contractor had done.  When our FM was there he told us that our contractor was the best.  That many other excavation companies would have just dug the hole and that was it, but our contractor, CDK Structures, would completely change the landscape for the better and we couldn’t agree more.  The way him and his crew were reshaping the grade and fixing the future front yard to remove the water issues was great.

We had talked with the FM about the side we still had to clear and he told us, hey maybe you can sweet talk Chas (CDK) into scraping off that area with the dozer they had out there because it would probably take us an hour or two with our tools to do what needed done but he could do it in only a pass or two with the dozer.  We came back with the intention of asking Chas if he could do that for us and he had already scraped it down and added dirt all on his own!  We didn’t even have to ask because he just believes in doing quality work and giving his clients the best possible outcome.

Here’s a picture of what we came back to and we couldn’t have been more pleased.  You can’t tell from this picture, but he really did us a big favor without us even asking because that’s the way he thought it should be.  We now have just a little patch towards the back of overgrowth we have to cut away, but that area is drier and shouldn’t be too hard for us and our tools. 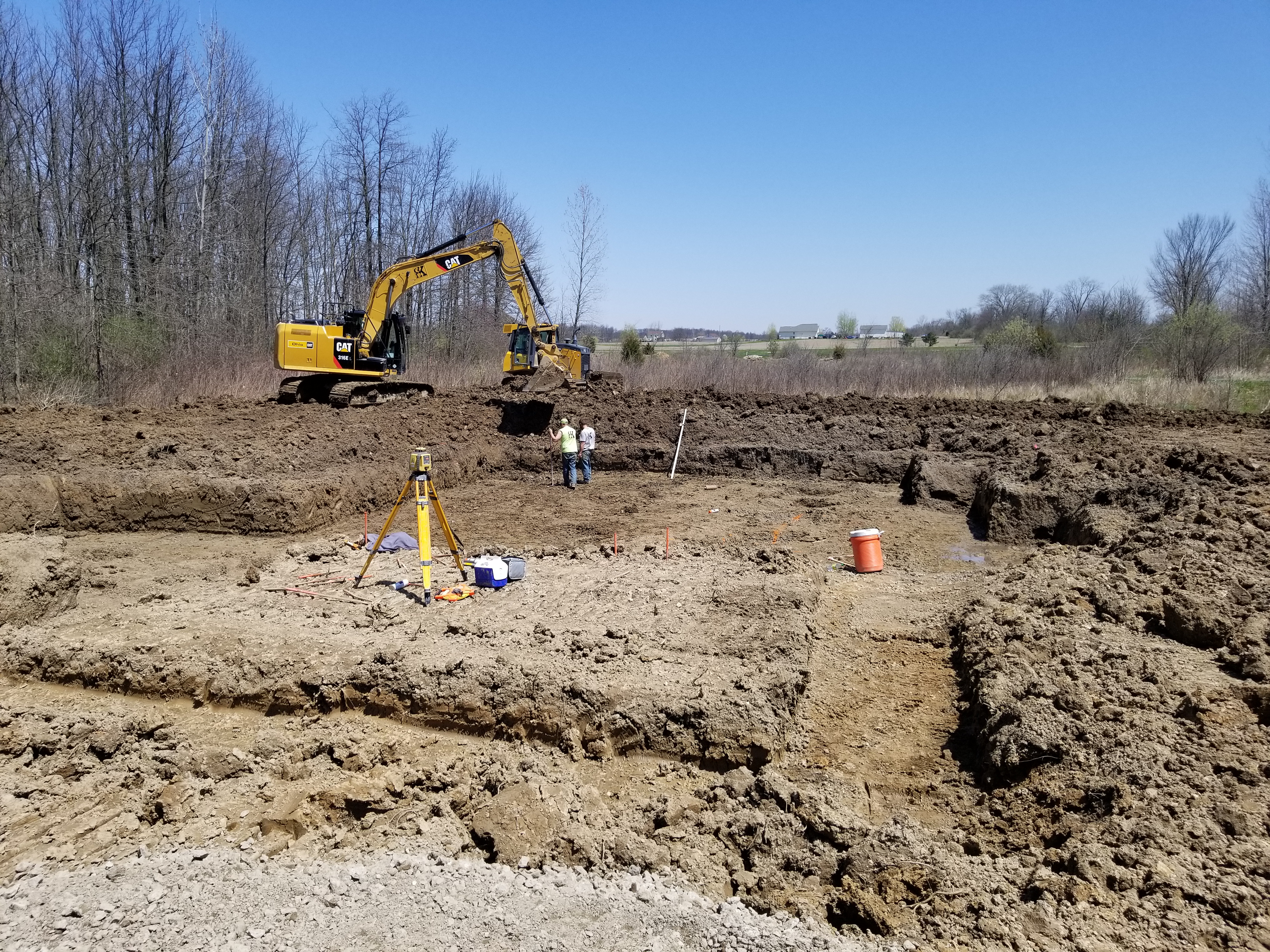 We watched them do a little more digging and then they were done.  They had one more truck of gravel come in so they could finish the construction driveway up near where our side entry garage will be and Creative Kid immediately wanted to run up to the top before they flattened it down. 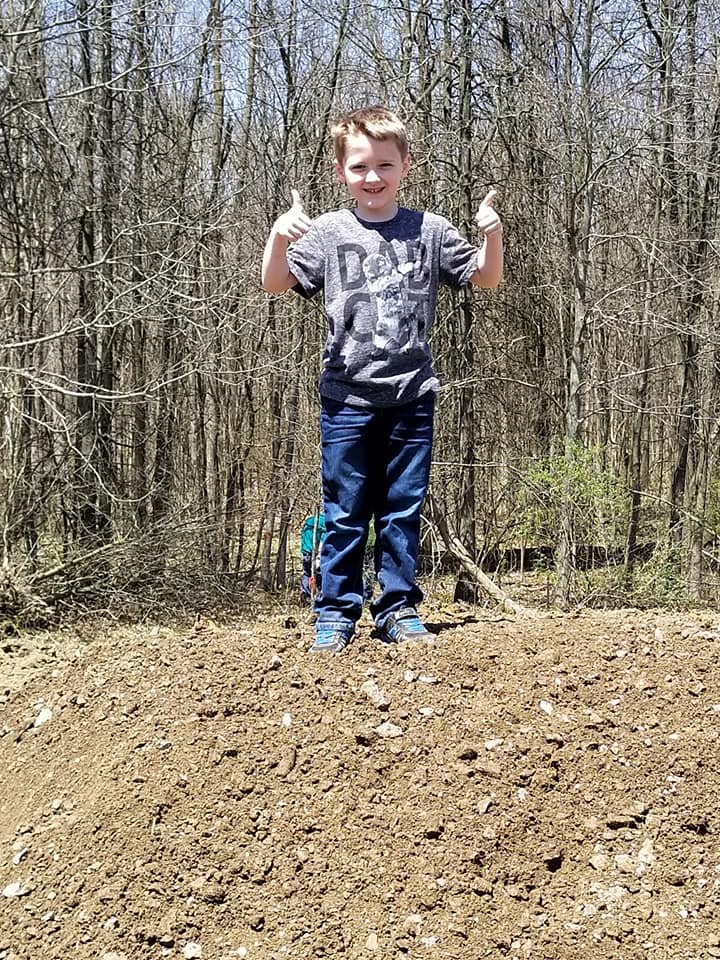 We then spent some time marking trees that need to be cut down where the septic is to be now that Chas was able to explain the new boundaries thanks to the county.  Chas and his workers spent time cleaning out the treads on their equipment and left while we were working in the woods.  When we came out we took a few moments to take in the work that was done today and check out the basement area.  Richard and Creative Kid climbed down into the hole to check it out. 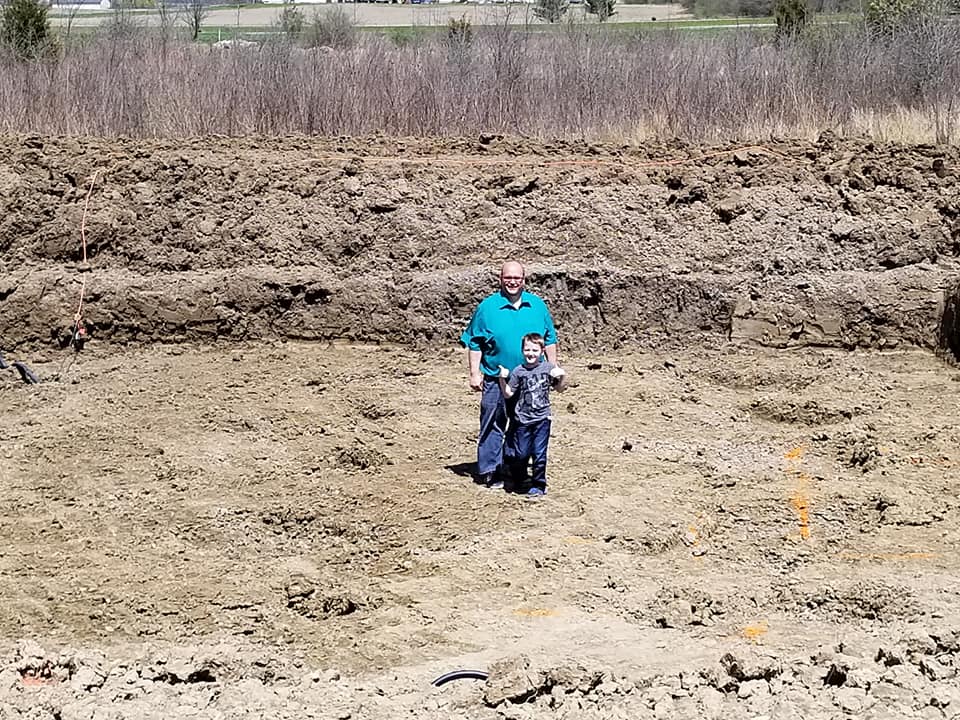 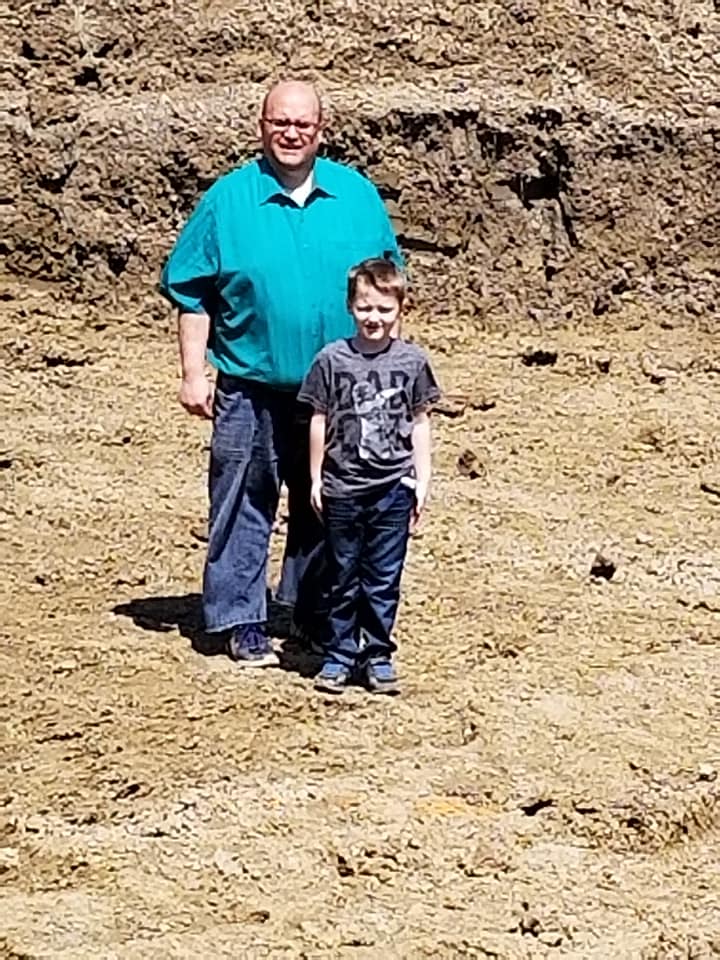 To me from above the hole doesn’t look all that big until you see people standing in it and can see the scale.  This is a huge house for us, almost twice the size of our old house, and the first floor alone is bigger than the square footage of our old house.  Yet from standing on top it is hard for me to wrap my head around that.  In the end there was a little water at the bottom of the dig in a couple corners and honestly that could have come from where there was still some water laying on the ground.  We were concerned we could hit a spring or something else that would cost more or slow us down, but other than some useless field tile, there were no real surprises.

Before we left, we took the images for the timelapse off the camera and here is the result.  You can’t really see a whole lot of the basement hole because they are building up the elevation around the house and the camera is not high even to show that downward angle, but you can see some of the shadow of the hole and the outline.