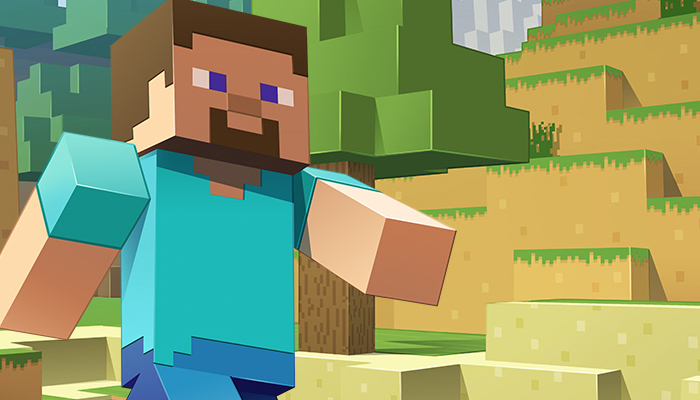 Do you play video games with your kids or do your kids play alone?  I was recently talking with one mom about Minecraft and she was impressed that I knew so much about the game and that I actively played it with Creative Kid instead of him playing the game by himself.  I will be the first to admit that I wasn’t all into Minecraft at first (for that matter, l I don’t play a lot of video games anymore unless they are a quick thing I can play on my phone or tablet), but the more I saw my husband play it with my son and the more I saw how into it Creative Kid was, the more I wanted to check it out for myself.

Our family plays on the PS4 together(although I also own the PC version and Creative Kid also plays on his tablet via Pocket Edition).  It’s fun, we can play co-op or PVP and it can even be educational!  The comparison I hear most is that it is like Lego, but in a video game, and while this is true in that you can build things and you get different blocks to build with, I think the comparison doesn’t really do Minecraft justice.  Minecraft has something for everyone and I think that’s why it makes a great family game.

Are you a builder and like building things from your imagination?  Minecraft is for you!  You don’t even have to turn on the fighting portion of the game or have to go ‘mine’ to get the blocks you want to build with…just turn on Creative mode and all the blocks are at your fingertips.  Do you like competition and like to beat the bad guys?  Well you’re in luck, there are plenty of bad guys you can fight in Minecraft…from skeletons to ghasts (which are really like large ghosts that shoot fireballs at you), you can be the hero and save the world one bad guy at a time.  Do you need a goal?  Minecraft has many goals you can go after from fighting a wither to beating the Enderdragon to trying to get the ultimate armor, there are plenty of goals to be had!

Then there’s the educational side of things.  Creative Kid learns about different biomes and how to make simple machines.  He learns about farming and where different resources come from.  He learns some physics properties, how to build structures and even how to follow a map.  There are lots of educational opportunities within the game, but who says you have to stop there.  We follow a youtuber, Stacy Hinojosa, who does a lot of Minecraft videos (and she keeps her channel family friendly 😉 ) and she recently started a Minecraft Field Trips series where she goes to the actual biomes in real life and does educational videos on those things as they relate to Minecraft.  I highly recommend her channel and can’t wait to see where she goes on her next field trip. Creative Kid has also become interested in the mods and modding in general that has been done to the game.  He is too young yet to play on a PC, but I can totally see in a few years time he may be interested in learning some computer coding all because this game has piqued his interest.

Then there are things you can do outside of the stand alone game.  We created a super flat world just so that we can do build battles against one another.  We pick a topic, like car, and set a timer for 15 minutes and see who can build the best looking car in that time.  Its fun to see what we each come up with when we have to think outside of the box.  There are mini-games you can play against one another where the last man standing wins (kind of like a cute version of hunger games) or ones where you just try to knock your opponent down to the bottom of a bunch of layered land masses before you hit the bottom (this game is called Spleef).

And of course we can’t forget the Minecraft Legos, mini-figs and other various toys Creative Kid has collected since the beginning of his Minecraft obsession.  I have to say, if Creative Kid is going to have one set of toys or a franchise that he loves, I’m glad it is Minecraft as it seems to hold the test of time (it’s not a fad that he stops playing with after 2 months) and is something the whole family can enjoy.

So if you’re a mom who normally just verifies that the games your child are playing are age appropriate and then lets them play alone, I urge you to look at it from a different perspective and give it a chance to be a family time game.  I can tell you that we make great memories using Minecraft as a platform for family fun!