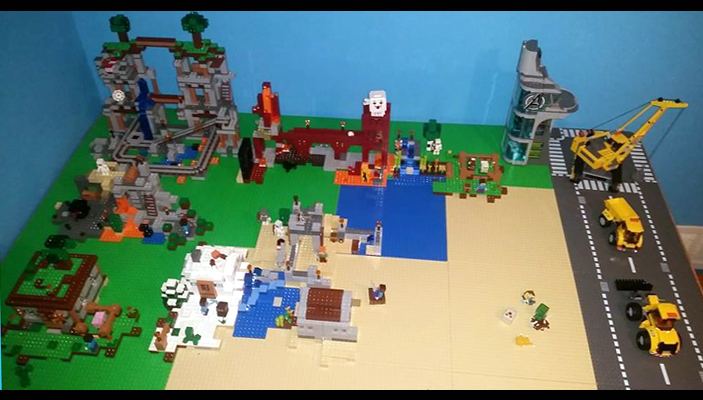 Let me start out by saying this project is not cheap.  If you are looking for an economical way to make a Lego table, this tutorial is not for you. However, if your child is obsessed with Legos and you want to make a table that will stand the test of time and is for bigger children and adults, not just for toddlers like you find on the market, then this is exactly what you are looking for!

So let’s start with why I found it necessary to make a Lego table in the first place.  My husband and I had purchased one of those cute little Lego tables for Creative Kid when he was 15 months.  It was pricey at $150, but we thought he would use it for years and it was his big Christmas gift that year along with a bunch of duplos.  It was the type of table that the top could be flipped over to be a smooth table top and it just seemed like a great multipurpose item for his toddler years.

Creative Kid used that table and he loved it, but as he got older he complained that it was too small and there was not enough room to build his creations.  The total square footage of the buildable surface was probably only 3 square feet at best. The chairs were tiny and the table very short so it was hard for us to play with him on the table as well.  Eventually one of those little chairs got broke and I had to replace it with other toddler chairs I found at Ikea.

Furthermore, Creative Kid ended up being tall for his age. This meant he really outgrew the table way before I thought he would. In addition, because of the playable surface being so small, most of his creations started being built on the dining room table or the livingroom coffee table…both places I didn’t want them to be.  Here’s a picture of just how little playable space we got for our $150.

By the time Creative Kid was 3 1/2, I started looking into alternatives.  What I found was that there really weren’t many options out there if you were looking for something more than about a 2 ft square or maybe 2 x 3..but then those were train table height and not really a grow-with-me type option.  At that point I started looking into making our own table.

At first I looked at getting an old table and re-purposing it, but seeing as how this table would be in a highly trafficked room open to our dining room, I decided to buy a new table in a finish to match our dining room table.  As I said, this project was not cheap and I wouldn’t necessarily recommend this route to everyone.  For me it was about maintaining the look of my home, but if I had a play room, I would have gone to a few thrift stores and picked something up that would work.

In the end we purchased this table from Amazon. It measures 3ft x 5t…a full 15 square feet of playable space.  It was delivered free via Amazon Prime and required less than 10 minutes worth of assembly.  The table is very sturdy and I have no doubts that it will last the test of time.

The next step was to figure out how many Lego building plates we needed and what colors we wanted to buy.  The plates are a 12″ square and come in blue (water), tan (sand), and green (grass).  As I was doing my research I also found plates that look like roads and crossroads.  They were not easy to find at the time, but I thought I wanted at least a few for Lego vehicles and such.  In the end we bought 12 green base plates, 6 tan base plates, 2 road packs and 1 blue base plate.  Some of the items I found on ebay for a better deal or because they were impossible to find anywhere else.

After deciding on a the best layout and cutting any base plates that needed to be cut to fit the table., I then used my kitchen shears to cut the plates and sanded the edges so that they were no longer sharp.  I kept the pieces I cut off for a 2nd project as the base plates are too expensive to just toss about 1/2 of 5-6 plates!

To guarantee that I had the right fit, I used some flat Lego pieces to attach the plates together in all of the corners.  DO NOT SKIP THIS STEP!!  If you put the plates right next to each other you will NOT be able to build across the plates as there is some natural spacing that needs to be there!

Once I had the layout right, the side pieces cut and the spacing correct, I started gluing the pieces into place.  After doing a lot of research to find out what glues to use, I went to the hardware store and got some large tubes of adhesive.  Legos are made of ABS plastic, as are tub surrounds, so I went with this glue that is for adhering tub surrounds to wood as I knew it wouldn’t melt the plastic.  Be careful when picking out adhesives as I had seen some pictures of disasters and this is too expensive of a project to ruin it at the end.

I then went about gluing down each plate one at a time, being sure to reattach my Legos in the corners to guarantee proper spacing.  This whole process took less than an hour.  Don’t be afraid to be generous with the glue, but don’t over do it so that you have glue oozing out of the sides when you put down the plates.  I would suggest leaving at least a 1/2 inch away from the sides so that when the glue spreads out, it won’t come up through the seams.

Next thing you need to do is to put as much weight on the table top as possible.  I used the leaves out of our dining room table to add weight (placing them upside down so that the full surface was against the plates) as well has some full totes we had and anything else I could get my hands on that had some heft to it and was smooth to put the most pressure and cover the most area of the table top.

By the time I was done there was very little of the plates visible.  Then we waited the required length on the tube.  I waited for full cure time before allowing Creative Kid to play on it because I knew pieces would be being pushed on and off those plates and didn’t want there to be any possibility of pulling the plates up when trying to remove a Lego.  Honestly it was probably overkill, but I didn’t want to have to re-glue anything.

And here you have it, the finished product.  I forgot to get a picture immediately and the table quickly started filling up with Lego sets that were previously sitting on my dining room table!  It’s been a hit!  We’ve had it for over a year now and it still gets used quite a bit.

What I love most about this table is now it is standard table height.  We keep our extra chairs from our dining room table at the Lego table and we all sit there and do Legos together.  Creative Kid also will play with other building toys (Read: Minecraft Papercraft) on the new table as well.

While the initial outlay is around $350, (it could have been done for much less if you had an old table you wanted to use or even a wood card table would be a good optoin and it would have legs that fold for portability!) we plan to be using this table for at least 8 years, if not longer, so to us it was worth the investment.  On the other hand, the $150 table we bought originally was used for only about 2 years and if I had to do it all over again, I would have skipped buying it all together and put that money towards this project.