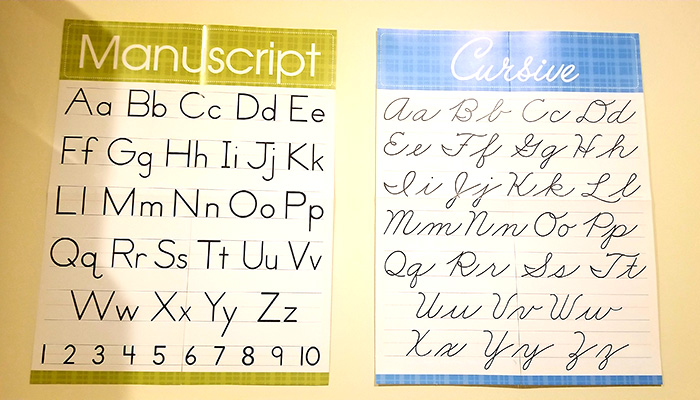 Today was the day….the day I have been waiting for…the day I hoped would make a difference for my son. If you’ve ever heard me talk about my son’s antipathy for handwriting you would know my son HATES it. Like white hot hate….procrastinates…complains…man it’s like pulling teeth and beating my head against the wall at the same time! Seriously it’s been THE struggle of our homeschool. Sure we’ve had other small issues come up here or there, but they were mere bumps in the road compared to the handwriting struggle.

Now handwriting as a subject is the biggest struggle, but when you think about it handwriting permeates so many other subjects. I suspect handwriting to be the underlying reason he sometimes protests about various other subjects…they are always things which require him to write something. I have made accommodations on some subjects to cut out writing for busy work purposes only, but I know we are rapidly approaching an age when he will need to write paragraphs, book reports and essays.

So I chose this year to do the transition to cursive writing. My hope was that he would enjoy it more. Some of his annoyances with manuscript writing seemed to be “doing it the right way” where he had to pick up his pencil so much. See he preferred to retrace lines to do things like crossing T’s or making H’s rather than picking up his pencil. Since you pick up your pencil so little in cursive writing, I was hopeful that this would be more enjoyable for him and less of a power struggle with me.

We use A Reason For Handwriting as our curriculum and bought book T for this year which stands for Transition. There are several ways the book can be used to transition to cursive depending on what time of the year you want to start the transition. For our schedule I decided to start our transition halfway through the year. I felt Stephen still needed more manuscript practice before we started cursive no matter how much drama it caused. Ugh, it’s been particularly bad lately like I’m asking him jump off a building or something when all he has to writing is a half a page of practice per day. ?‍♀️

But today was the day. The day we were starting cursive and I had high hopes as Stephen even had expressed interest when I told him it was coming up a few weeks ago. He was excited. About handwriting. That was like a miracle in and of itself. So just like manuscript, the cursive training started out with one letter at a time, starting with the vowels. Today was the letter A, both upper and lower case.

It took a long time, but not for the reasons it normally takes a long time. It wasn’t him trying to stall and me getting frustrated after a long time. No, it was because he was actively interested and excited. He was asking me questions, wanting to know the reasons for things like an n having 2 humps and an m having three when in print they each have one less. It was demonstrating different words and letters he asked about because he was truly fascinated with the whole subject.

I don’t know if this will continue or if after the novelty wears off we’ll be back to pulling teeth to get through handwriting, but I can tell you I don’t think it will take as long and that I wish I had started the transition sooner. Stephen craves new knowledge. He gets bored easily doing the same thing over and over again especially if he feels he knows all the material and has mastered it. It’s why we often fly through some areas of Math U See and skip straight to the test even on some chapters.

Don’t get me wrong, I want him to understand the value of practice. He has to do a lot of practice when it comes to Taekwondo. But I’m trying to find that balance of when enough practice for the purpose of practice is enough. It’s not like he isn’t going to get practice while he writes for the rest of his life basically, so at what point is it okay to drop it as an instructional subject and just correct when needed while he is writing for other subjects? I can’t say I would have a lot of fun doing mundane copy work either. I know a lot of homeschools that thrive on lots of copy work, but that is just not going to work for my son and I need to know when to stop putting a square peg into a round hole. I think this year I hit a brick wall trying to continue doing so and I wish I would have realized that it was time to move on sooner.

So do you teach cursive in your homeschool? We do for multiple reasons and I’ll list the top three here. The first one is pretty simple…if you don’t know your history you are doomed to repeat it. Now you might say, what does learning cursive writing have to do with history? Well I firmly believe that if we as a society stopped learning and teaching cursive, you would eventually have generations that can’t read our founding documents and other important writings of the past. If you can’t read our history from it’s original forms, then eventually anyone could tell you anything about history and you wouldn’t know any better if they were lying. It’s a line of protection from history revisionists, of which there are already many.

My second reason is similar to the first in that if you don’t know cursive you would also miss out on the history of your family. How many people have old letters or baby books or wedding albums with writing from your parents, grandparents or maybe even great grand parents or many other generations back? I know I have some of my mom’s old notebooks that have everything in them from some old letters she wrote but never sent to plans for crafts or recipes. What a shame would it be if my son was never able to read them? Especially considering she was never here on this earth to meet him and through stories, pictures and her writing will be the only way he ever knows her.

A third reason I have of why I think it’s important for children to learn cursive is that it really helps cross the brain divide. Cursive is both a bit right and left brained in that there is elements of both sides of the brain in use during cursive writing and therefore it crosses the hemispheres. This is good for brain development and is helpful for a lot of kids who may struggle in a lot of ways that have nothing to do with handwriting. There has been much scientific research in how cursive writing stimulates the brain and works both the right and left side in synchronicity. If you have studied brain development in children in recent years you will have found that there are entire methods used to help children who have trouble with their whole brain working together. There are therapies used to help build those pathways from one side of the brain to the other. Cursive can be a useful tool in creating these pathways.

So there you go, those are some of our biggest reasons for teaching cursive. I was shocked when they took it out of schools and thought simple things at first like, how will people learn to have a true signature? But honestly we didn’t have kids at the time so I didn’t dive into the topic much. Now as we are teaching it to Stephen, they are bringing it back into public schools (at least here in Ohio). This is a small step towards bringing back focus on fundamentals in public schools.