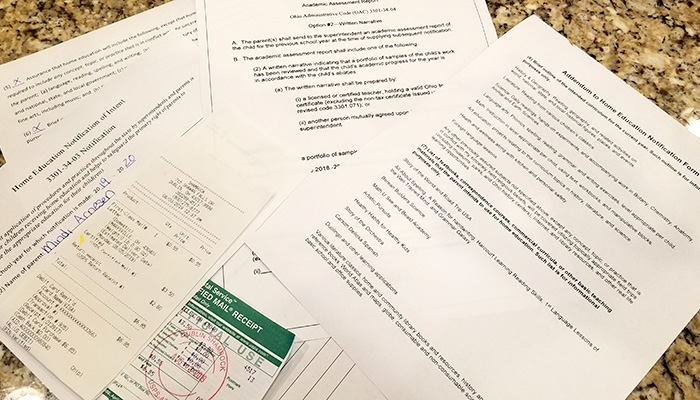 If you live in Ohio and you homeschool you know it’s that time of year when you must send in your homeschool notification. Up until this year that time was a little more flexible as there was no date or deadline for your notification to happen. This year the laws changed. I suspect it’s due to those people who were a little too relaxed in how late into the public school year they waited to send their notification. It is for sure one of those things that drives me the most nuts where a few ‘bad apples’ spoil the bunch and end up resulting in blanket rules that mostly punish those who were doing things the right way all along.

This is our 2nd year notifying for Creative Kid although he’s been homeschooled in some capacity for going on 5 years, albeit the first 2 years were preschool. In Ohio you don’t have to notify until compulsory attendance is required. Ohio’s compulsory attendance law is age 6 by the start of school. With CK’s birthday being in October, we never had to notify during his kindergarten year, thus last year (1st grade) was our first year to notify. I remember notifying last year in early/mid August and being nervous that I was doing it all correctly. Then when I saw I had mail coming from the school district a little over a week later (USPS Informed Delivery is great but that day it was more like torture ?‍♀️) I was anxious and thought that they were going to ask for more info and over reach or that I had done something incorrectly. My nervousness was for nothing however, because it was just my excusal from compulsory attendance. That district was very quick and gave us no hassles at all. In fact their letter didn’t even have incorrect language in it (as so often happens) that we were “approved” for homeschool (they can’t deny, so there is no approval) or any of the other ‘big me, little you’ intimidation tactics that you often see in letters floating around on the internet from Ohio districts.

This year, the law has changed and in a frustrating way: notifications must be received by the week the schools starts in which your child would have to attend if they attended public school. Yeah that convoluted sentence means first, you have to figure out what school your child would attend if they attended public school (not always as cut and dried as it sounds) then figure out when that school starts to figure out your ‘deadline’ for notification delivery. Of course then there’s the fact that many Ohio parents notify for their children all on one page and those kids may go to different public schools based on public school grade so you need to figure out when to send based potentially on multiple start dates.

As someone who doesn’t send their child to public school nor ever plans to, I don’t really follow the public school calendar. ?‍♀️ I have no need to know when they start or stop or even which elementary my child would be in as those details are irrelevant to my life. It would have been much better if they law would have given a specific date taking these things into account, but who said legislatures are always smart and they certainly don’t tend to err on the side of “how can we make this easier”…so here we are.

For CK and for many other homeschool kids there’s also the fact that we don’t follow traditional school grade levels. My son is going into 2nd grade by public school/age standards but is in 2/3rd grade math, 3/4th grade spelling, reads at a 5/6th grade level, takes lots of subject that are above his grade level, etc. What grade do you consider him? We tell him he’s in 2nd grade because he needs to have an answer when people ask, but honestly he doesn’t fit into the box of a 2nd grader. At some point it is very likely we will skip a public school grade level as it’s likely he will graduate early. We might want to prepare him to take dual enrollment in college and homeschool at an earlier age than typical for dual enrollment public school kids. These things might not matter for elementary grade notifications, but what if he was between grades in homeschool that would put him in two different grades and different buildings and therefore different start times in public school?!?! This is often the case for homeschoolers who homeschool year round and follow a January – December calendar instead of a traditional public school calendar year. You can see how this arbitrary deadline could be a problem for homeschoolers.

The lovely folks at Ohio Homeschooling Parents advised everyone to send their notifications during the week of 8/5-8/9 as there should be no districts that start earlier than that and you can pretty much guarantee you are in compliance with the law without trying to track down a bunch of information about public school that has no relevance to your life. Some would say to send it way early to guarantee that, but notifications have known to be lost if sent in the middle of public school summer break. So on Saturday 8/3 I went to the post office and sent my notification through certified mail with the green card return receipt. This is the best way to send your notification as it is legal paperwork and gives you a way to prove when it was received and by whom since it must be signed for. Ohio’s law gives the superintendent 14 days to request more information in the case of an incomplete notification before they are required to issue an excusal regardless of what is on your notification.

We are obviously in a new district this year and I am slightly anxious to get back my excusal just because we’ve not had any experience with how things are handled in this district. Sadly there are some districts that try to overstep the law and ask for or require more information that they are entitled to and it is for that reason that we pay for a yearly membership to the HSLDA (Home School Legal Defense Association). But overall I am feeling more comfortable with the process this year and rest in the fact that the law is on my side and I have done what I am legally supposed to do. The clock started yesterday when they received my legal paperwork….14 days….tick tock.