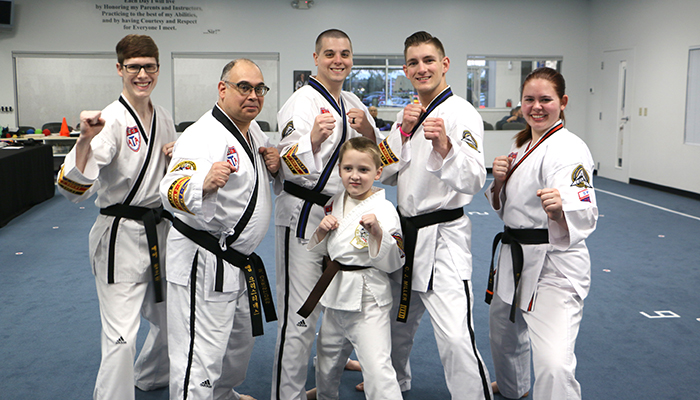 We have a brown belt in the house! I am so proud of this kid, I can’t even tell you. Last testing cycle he missed getting his belt with his class and barely passed on a 2nd chance with individual make up testing because his self confidence was a bit shot even though he could do his form at home backwards and forwards. He is so extremely social and struggles with executive functioning skills especially in big groups. I mean why focus when you can talk with your friends, eh? Combine that with the fact that he is loud by nature and he always brings attention to himself. Usually negative attention if you know what I mean.

Half way through this cycle I was trying to work with him on his form and he kept telling me, “I don’t know it, mom.” He seemed defeated and it really broke my heart, but I know he can do it if combines the right amount of focus and self motivation that leads to self confidence. At two weeks until testing week he still only had one stripe of 4 needed to test. He had one individual one-on-one session and he seemed to really ‘get it’ and focus much better after that. We practiced at home and I honestly felt he had this form down better than any other time in the past…but he still had a ways to go.

By the end of that first week, he got his second stripe, the one for knowing his form. That left one week to get 2 stripes, one for sparring and one for execution of his overall body of work…it’s the permission to test stripe. Monday’s class came around and there wasn’t testing for sparring as it wasn’t a sparring day. We normally go to Monday and Thursday classes and occasionally to Friday or Saturday so he’d have to wait a few days before he could attempt to get that third stripe and then he would still have to get the permission to test stripe by Friday really because I had an appointment Saturday morning and testing was the following week.

Thursday morning he was really doubting himself, but we kept practicing the form, self defense and sparring. I knew he knew it, but he had to know he could do it and he knew it was coming down to the wire. Thursday’s class included sparring and testing for the third stripe and he got it. He was so excited when he came out of class because it was like he finally believed he could get that final stripe on Friday. And sure enough, that next day he got permission to test.

Now he had to wait a whole week until testing. We practiced at home every single day. He had it down and I had no doubt he could do it, but he had to remember that he could do it and not doubt himself. When he doubts himself he thinks he can’t do it. When he thinks he can’t do it, he doesn’t see a point in trying. When he doesn’t see a point in trying he acts out by being funny or not taking it seriously. Which of course in turn leads to him not doing well. It’s a self-fulfilling prophesy. When you add in perfectionist tendencies then it’s even easier to give up and stop trying.

Look at this smile. Look. At. It. He couldn’t be happier. He knew he did well. I don’t think any of the instructors had to correct his behavior even once. He wasn’t sitting there chatting when he wasn’t supposed to, he wasn’t goofing off, he wasn’t giving his form only 50% because he gave up….he stayed focused. Was he perfect? No. And he needs to learn that’s okay, because the effort and improvement was simply phenomenal.

What a great birthday present to himself a day early. Happy Birthday little man, you’re growing up and I couldn’t be prouder. ??

I don’t want to end this post without a big shout out to ATA Blackbelt Academy in Powell. Stephen has been at the academy for a year and a half now and has learned so much….yes about Taekwondo, but also about himself about having good values and high standards for himself. He’s learned how to persevere even when he feels like giving up and that each day is just an opportunity to be the best him he can be. He still has a long way to go, I’m under no delusion that he won’t have set backs and struggles, but the instructors at this academy have lots of patience and really take the time to try to understand where each child is coming from and how to reach them.

A special shout out to Mr. Nick Heller for really taking a special interest in him the last few cycles. Please know that your efforts are not unnoticed and that we appreciate everything you and the other instructors do for the kids in your academy. You have all helped Stephen at one time or another along his journey and are making a difference in the next generation, one child at a time. ❤❤❤